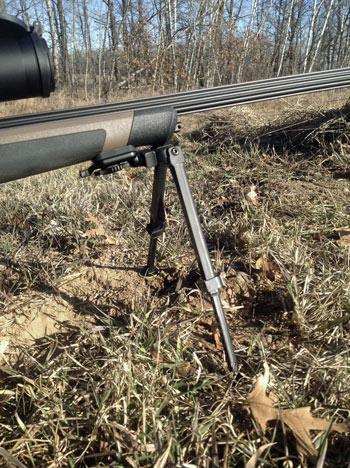 In conducting these bipod reviews, I intentionally did not look at any reviews or user comments on the bipods prior to my use and evaluation. I simply read the instructions, attached the bipods to my rifle and took them to the range. I also did not look at the price of any of the reviewed bipods. Knowing the price of an item can easily influence a reviewer when going into a product evaluation.

Each unit was attached to my Blaser R8 long range setup, carrying one of my heavy match barrels. I estimated that using this rifle would give a fair evaluation of the various bipods’ capabilities. The total weight of rifle and scope is just over 12 pounds, heavier than my hunting rifles but not as heavy as many range rifles I’ve shot next to.

First up is the Neopod Ultralight Hunting Bipod from Steinert Sensing Systems. This super lightweight 3 ounce bipod is made of a polymer/carbon fiber mix. The manufacturer calls this material PEEK and claims it has a tensile strength equal to stainless steel while weighing less than aluminum. The bipod feels really strong in the hand and on the rifle. After installation, I was able to load the rifle as I normally do with Harris or other metal bipods.

The Neopod Ultralight Hunting Bipod easily attaches to your rifle stock with a bayonet style mounting system that can be affixed to a Harris type sling stud. Because of the Neopod has some small parts that could be easily dropped, I highly recommend the unit be mounted before you leave for the range or field. The bipod attaches to the bayonet mount with a spring loaded locking collar. There are many attachment options available to adapt this bipod to a Picatinny rail, a flush mount sling attachment, flat or curved stocks. The bipod can even be mounted with the bayonet reversed to accommodate use with a suppressor attached to the barrel.

The Neopod Ultralight Hunting Bipod has spring loaded adjustable length legs (6” - 9”) with a powerful spring that can fully extend the legs from any position from fully collapsed or partially extended at about 1/4” increments. The extension stops are secure clicks and operate very smoothly. The legs deploy easily from the stowed forward position and lock down with a cam over type mechanism. To retract, you simply pull away from the mount about 1/4” and move forward to the stowed position.

When the legs are in the forward position there is a powerful magnet that holds them together and keeps them from making noise while moving. I tested the Neopod from the prone position and from over my hunting pack. As I expected, the legs were very easy to deploy, and I was able to load up the Neopod for proper shoulder pressure. The Neopod’s legs have rubber covered foot pads that are “sticky” enough to hold on most surfaces.

The Neopod doesn’t have a mechanism for controlling cant like the Harris bipod’s pod lock.
You have to hold for stability because the Neopod is able to cant approximately 20 degrees left and right of center. Panning is limited to less than 5 degrees in either direction, and that’s only from slight movement of the legs when in the down and locked position.

This bipod has a very unique, well thought out design. The Neopod Ultralight Hunting Bipod is lightweight, simple to attach, quick to deploy and easy to adjust for various field shooting situations. Neopod markets this unit as a hunting bipod, and I agree that the Neopod is best considered a field/hunting system. For range use, this bipod’s non-locking cant and limited lateral adjustment may not suit every long range accuracy shooter.