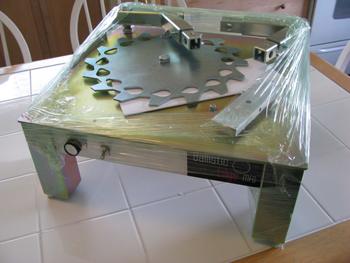 In the constant quest to improve accuracy and consistency, precision reloaders go to great lengths to prepare their ammo as best they can. The goal is to produce ammo that is as near identical from case to case as humanly possible.

An area that is getting more attention is case neck annealing.

Annealing is simply the process of rapidly heating the case neck to approx 750F for a second or two. This causes the brass to soften and return to a state similar to factory fresh.

Why is this necessary? As brass is fired and sized, it is worked hardened changing its ductility. Over time, this can change the neck tension which can affect your load tuning. If left unchecked, the necks will eventually become brittle and split, ruining the entire case. With expensive or hard to form cases, extending case life is a very good thing.

There have been many methods used over the years with differing amounts of success. The common failure of these methods is in using an arbitrary reference to determine the temperature reached. Because of this variability, annealing has likely done more harm than good, making brass of inconsistent temper, or worse making necks that were too soft.

How to monitor neck temperature

An annealing device must do these things:
1) Position the heat source (usually propane torches with fine tip nozzles) to heat the neck of the case. This should be easily adjustable and secure so that the heat source doesn't move during the run.
2) Position the case in the same location in that flame.
3) Expose the case to the heat source for a precise and repeatable amount of time.
4) Insulate the lower portion of the case so its temperature doesn't exceed 450F. This is absolutely critical for safety as any softening of the case web can cause it to fail.

The subject of this review is the Triple Torch Model 350 Annealer (M350) by Ballistic Edge MFG, which has really impressed me as a tool to get this tricky job done correctly, quickly and in large volumes. 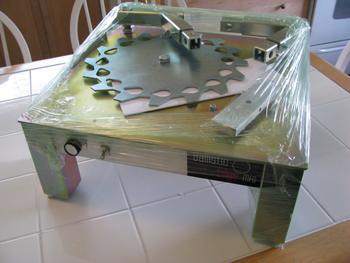 The first impression when I opened the box was WOW, this is a really well made and finished product. Mild steel with a very attractive zinc coating (making it rust resistant) is used throughout. Mine is a yellow/golden. A clear version, which leaves the surface silver is also available. I really like the looks of the finish.

All the welds are expertly done and the annealer is solidly built. There is no way you are going to wear the metal parts out under normal use.

Each leg has a large bolt for leveling, which I didn't need to use as it sat level on my table. You can also view the electronics and drive system. 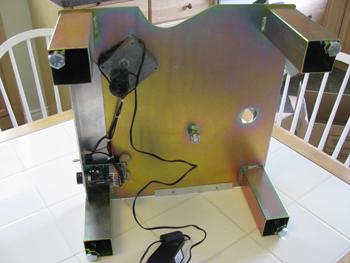 The turntable is really nicely cut out with no sharp or ragged edges. A smart design that accepts all commonly used rifle cases. 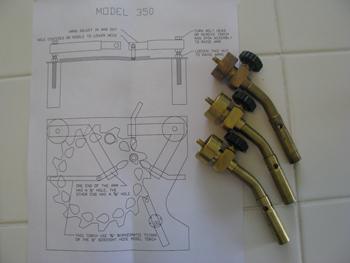 The annealer comes with the ability to mount 3 propane torches, which is unique. Most will only use two for small and standard sized cases, but if you are annealing the big cartridges like the Chey Tac and BMG, that third torch is going to come in real handy.

The only thing to watch with the propane torch is the size of the nozzle you are using. The holes in the support arm are quite small and the nozzles I had didn't work. The manufacturer supplied some smaller ones, and these fit fine. These were not a common item in my area but may be in others. The tubing used for the arms will not allow you to open up the holes to fit the larger nozzles. Maybe larger tubing can be offered to those that have larger nozzles? 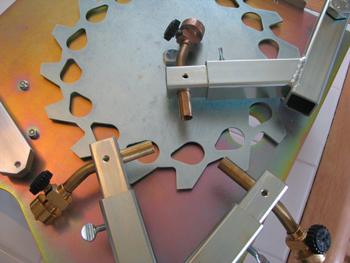 Height adjustment is done by moving some jam nuts on a large bolt. I found turning the torch arm made this a bit easier, but required removing the torches first. This is not as simple as a tube in a tube held in place by a cross bolt, but once tightened up, the torch is not going anywhere. I think the solid setup is worth the extra minute to adjust.

Also, care should be taken to ensure the locking nuts used to hold the nozzles in place are indeed tight. You do not want the torch to move around during the annealing process. All holes use standard threads so finding spare hardware is easy.

Turntable annealers have two ways of moving the brass through the flame. The most common is the turntable that moves at a constant speed. You insert the case in the turntable and around it goes. The torches are positioned and the intensity adjusted so the case is heated properly as it goes by.

The quirk with this system is that the case is going through an ever changing flame front. Set up can get pretty annoying as you have to juggle the torches to catch the case at the right time in its rotation.

The M350 Annealer uses a separate rotating arm that moves the turntable one location at a time. Each case is precisely located in the flame and is static during the heating process.

I really like this method, as you know that each case experienced the same flame front. Setting up the torch position is very straightforward.