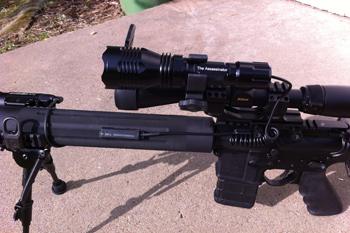 I was immediately impressed with the Assassinator AS-900G hunting light when I received it in the mail. It comes nicely packaged in a handy hard case to help keep all the extras neat and organized. It is a rugged light that is built from machined aluminum with an anodized finish. The fit and finish is first class, and it is well balanced without being overly bulky or heavy. It comes with a spare battery, which is a nice touch, and not seen much in today’s world. The charger allows you to charge two batteries at once, allowing you to charge the spare at the same time. The Assassinator comes with both an AC charger and a car charger, which is great when camping with no AC power available.

I decided to mount the light on my hog gun, a Rock River Predator Pursuit. Not having tested the light before, I decided to leave my Streamlight TLR-1s mounted on the gun. I added the Assassinator with the mount that came with it. It turns out this mount worked great, because I have flip up scope covers. The mount allowed me to move the light off center, to prevent the scope covers from blocking the light. I added the remote switch to the light, as it comes with both a remote switch and a conventional flashlight button type cap. The weight of the added light was insignificant and didn’t seem to affect overall balance of the gun at all.

Once it got dark I went outside to test it, side by side with the Streamlight. The TLR-1 is an awesome light, and I had doubts the Assassinator would be in the same league on brightness. However the TLR-1 has caused me to miss some hogs, due to scaring the hogs off when I turn it on. With both lights mounted I alternated turning each of them on, and I was totally amazed with the power of the green light from the Assassinator. It is every bit as bright as the TLR-1, but without the harshness of the white light. It cast a very strong beam of light down the center, with a secondary wider beam of ambient light around it, which makes for a great peripheral view. Should hogs be off to the side of where you’re pointing, the ambient light around the bright bean will still light them up and help you get on that hog fast. There is a small county roadside at the bottom of my hill. I could easily light this up and see it in the crosshairs at 355 yards, verified with my laser rangefinder. I am not sure what the maximum range would be to see a critter in your scope with the Assassinator, but I am confident it’s at least 355 yards plus. I went back inside totally impressed with what the green LED light was capable of. This is a true green LED, not a green lens over a white LED.

Once it was dark at camp, all of us flashlight nuts came together to show off our toys. We had a collection of lights that must have cost several thousand dollars. I almost felt bad when they discovered just how underpowered their lights were compared to the Assassinator. None of the other gun mounted lights were in the same league, and the one light that came close was a giant handheld spotlight that couldn’t possibly be mounted on a gun. Sadly, the brutal heat in southern Arkansas kept the hogs at bay and we didn’t kill anything. We could hear some close, but they stayed in the deep underbrush and never exposed themselves. However I did manage to light up a few armadillos, just to show off the Assassinator to the other hunters.

I have decided to remove the TLR-1 from my hog gun, and put in on my home defense gun instead. The white light spooks hogs and the green light is the way to go. Happily I will not have to give up the brightness for long range, and will get more kills in the future, due to the well built Assassinator AS-900G. I highly recommend it to anyone hunting critters at night!

For more information about the Assassinator AS-900 Hunting Light go to http://www.hogheavenoutfitters.com.


Steve Smith resides in central Missouri and is a Cal 50 ballistics engineer at Lake City Army Ammunition Plant in Independence, MO. Steve says he has a job doing something he loves, and gets paid to do it. He is a lifelong gun enthusiast who loves shooting, hunting, collecting guns and the great outdoors. Although he is a deer hunter, his biggest passion is hunting hogs, calling coyotes and dove hunting. Steve takes great pride in clean one shot kills, and always strives for them.