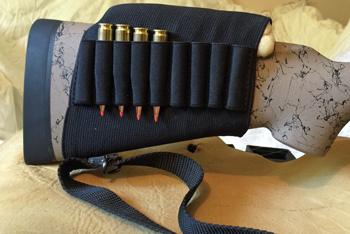 
Previously, I told the story of my pursuit of one rifle. A custom rifle. A rifle that would do all I needed a rifle to do. A rifle I could accessorize for comfort and pursue accuracy with.

The rifle is a trued Remington Short Action. It has a 27.5 inch 8 twist, 6.5 Creedmoor Krieger barrel. An HS Precision stock cradles the action and a Harris bi-pod hold up the business end. A Vortex HS LR 6-24 x 50FFP with their XLR(moa) reticle sits on a 30moa mount.

This is the second scope I've had on this rifle, so qualifies as its first upgrade.

The second upgrade was much cheaper. It was a comfort thing. I added a slip-on shell holder. A substantial piece of foam under the elastic shell holder raised the comb.

I was getting a sore neck while shooting in the prone position. With four bulged discs in my neck, it mattered. Now I can rest my cheek on the stock without adding stress to my neck, and stay aligned with the scope longer.

Some things about my reloading, and shooting habits, had to change. The rifle was capable of great accuracy, and purposeful practice should improve the owner's chances of finding out how accurate.

Listening to generous more accomplished people, they said case preparation is smart. Not being a big case prep kinda guy before, but watching excellent results from others’ efforts - a light went on.

Clean cases before reloading. Wiping them off was it, before. If I wasn't in a hurry a nylon brush through the case mouth, and done.

Now, I cleaned the outside of the neck, the inside of the neck - and the primer pockets. I was disappointed in myself for not learning the value of this simple procedure sooner. Especially after seeing all the carbon that fell on the desk from each and every case.

In the picture of the four cases, the two on the outside are clean. The two in the middle are like what I used to work with. A few minutes make a difference!

Another thing that changed was how I measured powder. I used to scoop it into the scale's tray to get close, then trickle in the rest.

Looking closely at the picture with the scale in it, you can see the trickle charger peeking through in the back. In the front you see the cap from the can of powder with a few grains of powder in it.

Beside the cap is the instrument that vaulted me into single digits. Tweezers!
Trapper told me he breaks single grains to get an exact weight. Looking for littler grains to add or take out - with the tweezers - works too.

Dang! I'd like to just scoop up a caseful, scrape it level across the mouth, and drop in a projectile, just like all the shooting greats have done since brass was invented for guns. I'm just not that good.

Hodgdon H4350 is the powder of choice because reinventing something that's already proven takes genius. Users get to play more, inventors gotta calculate.

Switching primers to CCI BR2s made my groups obviously rounder with less stringing. From my studying of primers, there doesn't seem to be a tangible reason one works better than another. It just do. So go with it.

All accuracy testing and proofing has been done with the the same 35 Hornady cases. They've been used a bit. I believe they're on their seventh loading.

All accuracy testing and load development with this rifle has been done with Berger 6.5mm 130 grain AR Hybrid Tactical OTMs.

I also shot a lot of other ammo, most Hornady factory stuff. The factory rounds that got right up next to each other came from a Hornady 140 gr ELD MATCH box. The Superformance 129 SSTs were the fastest, and not inaccurate. The Superformance load was better than minute of 'coon.

I picked the Berger 130 gr AR Hybrids because they weren't sensitive to COL, and I thought the 130 grain bullet was a good balance for the 6.5 Creedmoor.

In order to prove accuracy in a rifle or choose a load during development, shooting skill is paramount.

There seems to be a difference, or could be, between a good game shot and a good target shooter. I've shot thousands of rounds from rifles and handguns, and competed in IPSC in the early 1980s. Shooting little bug holes in paper is a big challenge though.

Learning what to do behind the rifle to be accurate, after learning how to load accurate ammo, took a different kind of research. No one wants to find out why they suck at something. There is a different tack to take for learning, fortunately.

Instead of digging through old wounds with a sharp stick to find out why you suck - find out how excellent people do excellent things – and copy their excellence. There are many skilled people willing to share their knowledge. Just shut up and listen.

I know about controlled breathing, and practice that. Dryfire until your crosshairs don't move when the firing pin smacks the back of the bolt face.

Heartbeats matter. I can't say I can control it, or always shoot between beats. I can allow it to return to normal after doing work before I shoot, though.
Get calm from the inside. Relax the outside.

Jerry Miculek once wrote that he worked 4-5 hours a day for months, to be able to move his index finger decisively, without moving a single other muscle in his hand. So, practice that. It means something. The proof is that it's working for Mr. Miculek.

Recently I read there was such a thing as "bracketing" your target. Trap your target in a quadrant of your crosshairs instead of floating the center dot over the middle of the target. Aim small-er.

With the rifle, 130 gr Bergers stuck in Hornady cases and my wife's sewing table - out to the range I went. After clamping my pickup's floor mats on top of the table for a slip free, Ram Tough, surface – I tried again.

That's as good as I can shoot now. I used to take rifles to DB's place. If a rifle could shoot, DB can prove it. He's an artist with a rifle. He's a knife maker extraordinaire. And he's a picture drawer like you ain't never seen before. And he can shoot.

The rifle builder built a fine rifle. Hornady built a great round. Berger Bullets take precision beyond my abilities.

Just shoot it yourself now!

Les Voth learned to hunt whitetail deer and coyotes in his native Canada, and has hunted both as often as possible in eastern North Dakota since immigrating to the United States.
Reactions: Brian Ranson