A Rifle for the Long Shots The 6mm Dasher 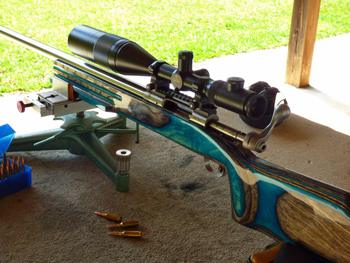 A Rifle for the Long Shots – The 6mm Dasher

There was once a publication titled Varmint Hunter Magazine and it included a section called ‘Member Photos’. Many of the pictures were of shooters who had been inducted into the magazine’s Long Range Club, a club that honored those who struck pay dirt by eliminating a varmint at a distance of 500 yards or more. Almost unbelievably, there were some who made successful, and verified, shots out to 2500 yards. For their accomplishments they received a nice certificate suitable for framing.

View of right side of rifle.


For quite some time I wanted to qualify for the Long Range Club by driving out west and making a one thousand yard shot on a prairie dog. It would give me the perfect award to hang in the reloading room next to my “Fastest Gun in Hogtown” plaque. But with no warning the magazine, and along with it the Long Range Club, closed shop. I was somewhat depressed and dropped the idea.

But life goes on. A few months later while conversing with a friend from Pennsylvania he said he might be able to provide me a long shot at a groundhog, maybe even a thousand yard shot. That boosted my morale considerably… after all, a trip to Pennsylvania is a lot shorter than a trip to Montana, and a groundhog is a considerably larger target than a prairie dog. Well, the motivational flames were relit and my enthusiasm was kicked up a bunch of notches.

Connecting with a varmint at a thousand yards, or anywhere close to that distance, would be quite an accomplishment. In fact, there are some who think it’s not possible to hit something as small as a prairie dog at that distance, and go so far as to say there is some stretching of the truth involved with these claims. As one shooter told me, “You can’t even see a prairie dog that far away, so how can you hit it?” A good point, but a trip to any 1000 yard match would put the matter to rest. It is not uncommon for these competitors to put ten shots in a six inch group, and this accuracy would easily take care of a small varmint.

But to achieve this deed requires a very accurate rifle, a good shooter, premium ammunition and catching Mother Nature in a good mood. Before attempting this goal two major hurdles would have to be overcome: obtaining a rifle capable of the task and finding somewhere to practice at considerably longer distances than the local 300 yard range… the mountains and rolling hills in south-central Virginia do not offer many opportunities for long shots. Obviously the most important of the two requirements would be the rifle, and this required a decision on which cartridge would be best for the job.

Every shooter has their reasons for choosing what they believe to be the ideal long-range cartridge, and these choices are many and varied. My method was fairly simple. A little investigation indicated that the most popular calibers for thousand yard shooting were the 6mm, 6.5mm and 30-calibers. And, according to one source, the 6mm Dasher has set more records at 600 and 1000 yards than any other round.

Further examination into the Dasher brought up several rather impressive bits of information… in 2014, Jim Richards, shooting at the Deep Creek Range near Missoula, Montana, set a world record with his 6mm Dasher by placing ten shots in a 2.6872-inch group at a thousand yards. And he was shooting in the Light Gun class. At the 2015 IBS 600 yard Nationals Richard Schatz took first place in the two gun category with his Dasher, and notably, seventeen of the top twenty competitors were shooting 6mm Dashers. Not surprisingly, a search on the internet will bring up a myriad of cases where the Dasher has set another record.

Curious to learn more about the history of the Dasher I contacted the originator and well-known gunsmith, Dan Dowling. It was around the year 1999 when Dan and his friend Al Ashton, came up with the 6mm Dasher. The name of the cartridge was derived from the names ‘Dan’ and ‘Ashton’. Using a 6mm BR case the body was lengthened and given a forty degree shoulder and a shorter neck. The Dasher offers about ten percent more case capacity than the standard 6mm BR and provides an extra 130 feet per second velocity with a 105 grain bullet.

Dan said the cartridge was first made in 22 caliber and the first ‘cut’ of the 6mm Dasher went to Al Ashton. The second 6mm Dasher went to Richard Schatz in Bismarck, North Dakota. Dan said Richard was the one who got the Dasher going. Richard was reading a copy of Precision Shooting Magazine in the fall of 1999 and saw an article about the then-new 6mm Dasher. Richard gave Dan a call, and after putting together the components, Dan went to work. In January 2000, the gun was completed and Richard Schatz had the second 6mm Dasher rifle ever created. The Dasher was on its way.

It would have been nice to build my Dasher from scratch starting with a custom action, but that was out of the question… funds for this venture were minimal. After mulling over the situation it was decided the least expensive route would be to take one of my least-used target rifles and replace the barrel. Although not inexpensive, this option only required a barrel, a reamer and some first-rate gunsmithing.

The rifle selected for the project was based on a Savage Model 12 Target action; a right-bolt, left-load, right-eject, dual port action that included the competition version of the Savage AccuTrigger. This trigger can be adjusted down to six ounces and breaks as clean as a thin glass rod. The action had been completely worked over by Mark Penrod of North Manchester, Indiana, and in his words: “The action was inspected for true surfaces, including the thread straightness. The threads were straight and needed no adjustment. The receiver face was machined square to the axis of the bolt. Two modifications were made to the bolt; the bolt head was machined square to the axis of the bolt and lapped-in with the receiver lugs. The recoil lug was surface ground flat, then de-magnetized.” When the rifle was returned a Nightforce 10-42X BR scope with a 20 MOA base was mounted on the rifle. The Nightforce has a maximum adjustment of 40 MOA and with a 20 MOA base, is ample for a thousand yards.

View of left side of rifle.


The Savage action rested in a Mike Koontz stock made from blue and black laminated birch. The forearm was given the maximum width of three inches and the bottom of the stock was sloped slightly from the pistol grip to the recoil pad in the event the rifle might be used in benchrest matches. From the three inch base the stock quickly curved up to a width of two inches and flutes were cut down the sides. The three aluminum action pillars were bedded in Marine Tex. The finish required four coats of clear, each coat sanded, then buffed with a swirl remover followed by an application of Mother’s Carnauba wax. The stock was finished off with a rubber Pachmayr Decelerator recoil pad that would soften some of the kick.

Selection of the new barrel was easy… most of my custom rifles have Krieger barrels and I tend to favor this brand when having a varmint or target rifle put together. Not only are Krieger barrels very accurate and long-lasting, they are very easy to keep clean… a trait that seems to go along with a cut-rifled barrel, and an attribute that I have come to enjoy immensely. So an order was placed with Krieger for a stainless 6mm barrel, one with a 1:8-inch twist to handle the 105 grain bullets.

The reamer specifications were obtained from a friend who was taking up 1000 yard competition and his 6mm Dasher was built by a noted gunsmith… one who specialized in long range rifles. I figured this reamer would be ideal so an identical one was ordered from Dave Kiff of Pacific Tool and Die.

Dave is an excellent source for knowledgeable advice on reamers, chambering and the finer details for accuracy that often prove so valuable. It did not occur to me at the time, but Dave would have been the logical place to determine the best reamer specification to meet my requirements. Next time I will know better.
Next page: A Rifle for the Long Shots – The 6mm Dasher >