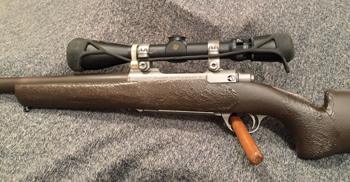 Last summer I tried selling my Ruger Mark II VT. This 28 inch barreled factory firearm was too heavy to carry on a hunt. I have a custom Remington in the same 6.5 Creedmoor caliber that was more practical, so it had to go.

Unfortunately, no one wanted it. So after a few months on consignment, I took it back home. The store it was on consignment at had used it for weekend entertainment, and it showed. The squeaky clean barrel was badly fouled, among other things.

The side swinging safety wouldn't extend all the way back to lock the bolt anymore. The slotted screw heads were wrecked. The action had been sucked so far down that it made the wood proud around the safety lever. Torquing the screws that hard with an ill-fitting screw driver had shaved the edges of the screw slots off.

Sitting behind a locked door, that rifle bothered me for months. Finally, I came to think I should just make it my own. "Watch this!" are two words feared by parents, gun loving purists, and collectors of original art.

Shaving the wood from under the safety lever allowed it to function as designed again. The bolt was grabbing something as it was thrust forward. Overcompressing the laminated stock with the action had the rear action screw "proud" under the bolt. The screw was filed down, just short of flush in the hole.

Now that it all worked as it was intended again, it was time to make it practical for a guy who has lost much of, and is losing more of, his ability to pack more than his lunch. Ten inches came off the muzzle end of the barrel.

Many years ago I had a Remington P17 in 30-06, with a barrel that someone had hacksawed to 20 inches. The saw marks were still on it when I bought it. The first three shots at 100 yards had three holes touching. I never had a problem with a hacksaw again.

A stainless steel hose clamp was wrapped around the Ruger VT's barrel at just over 18 inches. That would keep the cut mostly straight. Then, 10 inches of stainless steel barrel was sawn off in a dimly lit basement. It came off almost square. Then, it was squared with a hand file.
No, the crown doesn't look "factory". It will touch the first three shots out of the magazine though. And that's with me shooting!

An 18 inch barreled 6.5 Creedmoor will give a 140 grain bullet a velocity of about 2500-2550 feet per second. That's right in the range of American factory rounds out of a 6.5 Swedish Mauser sporting a 22 inch barrel. I've shot a truckload of deer with a 6.5 Swede, and every one dropped in its tracks. The velocity loss isn't as big a deal as shot placement.

The bolt handle knob was ground off, too. A length of the muzzle end of the cut off barrel section was counter bored, leaving just enough of the crown to see the original rifling. That piece of barrel was added to the bold handle to extend it. Recycling at its finest!

The next modification to the Ruger VT was done to the laminated stock. It was very difficult to get a hold on the pistol grip area, because of how straight the stock was. Go pick up a factory VT, and you will find that you can't wrap your hand around the grip. Out came a plane, some files and a chisel set. Wood flew.

Moving, and relieving, the pseudo fluted top of the stock, deeper and farther back, allows a thumb to wrap over the grip now. Relieving the right side, behind the grip, allows the heel of your hand to gain purchase in that area, too.

The forend was shortened six inches, and narrowed. The large, rounded beavertail shape was difficult to get a grasp on in the field. Now it's shorter and narrower, with a sling stud right at the end, just before the radius.

It's still stout. It matters more how it is balanced. How it handles, now. Gripped in a two handed carry position, or shouldered and ready to shoot, the balance point is right between your hands. It balances three quarters of an inch behind the front action screw.

The Ruger VT is now topped with a Leupold 3.5-10X40 scope that has become my 6.5 hunting specialist. That Leupold has been the focusing factor on my first 6.5 Swede, then on a Thompson custom shop Encore, in .260 Remington.

The final result of my winter's effort to inject usefulness into an impractical (for me) rifle - cannot be called a work of art. I made some crafting mistakes. It's not pretty.

Painting the barrel and the stock made it slippery. JB Weld was applied to the handling surfaces with a toothbrush. Then it was painted again. It won't slip out of your gloved hands in the winter now!

Regardless of how some feel about Ruger 77s, they are durable and reliable. This shortened Creedmoor is a great truck gun, at 38 inches of overall length. It shoots very well, and the VT trigger is the best trigger Ruger ever made.

Les Voth learned to hunt whitetail deer and coyotes in his native Canada, and has hunted both as often as possible in eastern North Dakota since immigrating to the United States. Life Les'ons, by Les Voth, is available from Amazon.com, Kindle & createspace.com.