A Hunting Guide's Perspective on the Quality of Swarovski Optics 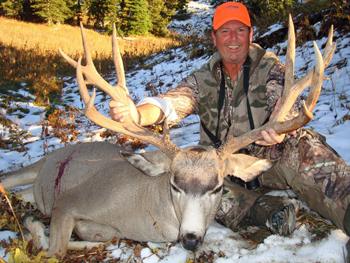 A Hunting Guide’s Perspective on the Quality of Swarovski Optics

By Robb Wiley
Of Non-Typical Outfitters

When I started my big game guiding career back in 1993, it soon became crystal clear that quality optics were one of the essential tools for hunting trophy animals. As I scoured the mountains of Idaho and Wyoming early in my career looking for trophies, I discovered that in order to be consistently successful, one needs glass that can go long and be able to do it in low light conditions. Even though your eyes can overcome some of the shortfalls of low end optics when you are a young 20-something, nothing can make up for using the best.

A Non-Typical Outfitters client with his trophy


Like most people, I tried the lower price point optics at first. What I quickly learned is that even though the lower price point brands are capable of getting you game, if you want to maximize your precious time in the field, quality optics are a must. There is no replacement for the best optics that you can find… ABSOLUTELY NO REPLACEMENT. Quality optics can save you many hours and/or miles during your trophy hunt and can help you to maximize all of your efforts.


I quickly noticed a difference in Swarovski optics as compared to other brands. The Swarovski optics had the highest color definition as well as the best low light capabilities of any of the multitude of other brands that I tried over the years. When you are looking for giant mule deer you’re searching for an animal that is primarily nocturnal. It is often at first or last light when they are up and moving.

When I am glassing for mule deer in the high county I’m often looking for slight color variations in the terrain: a white nose, a tan inner leg, a gray body in gray rocks, the glint of antler, etc. To add to the challenge, these bucks often do not show themselves very often at all. The Big Boys might only poke their noses out of the timber a couple times in a month at best, and you need to be able to pick up on subtle color differences in low light to spot them when they do.

As an example, we chased a mule deer in 2011 we dubbed “Magnum”. During the hunt for Magnum, we would not see him for days. Often it was 6 days between sightings and sometimes the sightings were very brief. When you’re putting this kind of effort in for one animal, you need all the optical advantages that you can get.


While hunting for “Magnum” I was carrying Swarovski 10x42 binos, Swarovski 15x56 binos, a Swarovski 20x60 ATS HD spotting scope and Docter Optic 30x80 binoculars (Big Eyes - which I wish Swarovski would make) and using every one of them. The harvest of that magnificent deer can be attributed, at least partly, to the Swarovski optics that I had at the time.

When Swarovski’s new modular spotting scope came out, I was admittedly scared of the price. So for the first year I continued to use my 20x60 ATS HD model. I remember thinking to myself, “I love this 20x60 spotting scope so much, and how much better could the new model actually be?”


My change of heart came while hunting for a giant buck we called “Snag.” The client that I was hunting with, Tim, brought the latest and greatest Swarovski modular ATX spotting scope with the 95 mm ATX objective and ATX 30-70 Eyepiece. I remember telling Tim, “No matter what I say, don’t let me look through that scope. I have spent enough money on Swarovski optics! I already have the EL Range binos, the 15x56 SLC binos and the 20x60 ATS HD spotting scope.”

Well, as fate would have it, one day Tim and I were looking at some bucks at well over a mile. ”Snag” was not among them, but they were a couple of nice ones for sure. Well, Tim says, “Do you see that cheater on the wide 3x4?” I could not see it. “Oh wait,” Tim says, “He might have two cheaters!” Well, I love looking at cheaters, so that was all it took. “Okay, let me see that scope.”


The proof was in the pudding. I could not believe the difference the 95 objective and 70 power made. I was sold! I carry the Swarovski ATX modular scope to this day. Happily.

The Swarovsky EL Range Binocular/Laser Rangefinder is, in my opinion, the best tool a guide/shooter could carry. In a hunting scenario, having the ability to range trophies without taking your eyes off the target animal is a huge game changer. This is especially true if the animal is moving through timber, ravines, washes, big rocks, ledges, cliff bands or brush. That scenario is often the case with giants, as they are rarely in the open. EL Range binoculars are another one of the many Swarovski advantages that help us help our clients.


When I first started using Swarovski 15 power binoculars on a tripod, I remember thinking, “This should be illegal!” That is how effective I thought it was. The technique of using 15 power binos on a tripod was perfected by the Coues deer hunters in the south country. It has now become a major tool that I use for finding deer at long distances, and it is really deadly at locating bedded deer in cover. I have tried other brands, but still carry Swarovski today.

One experience that proved to me that Swarovski was the way to go as far as water and weatherproof characteristics was a predator hunt a couple of years ago. I lost a pair of Swarovski EL Range binoculars during that winter predator hunt. They came out of my carry pouch on my snowmobile and were lost in the snow in January. They were found by a sheepherder buddy of mine the following summer. He cleaned off the lenses, and checked the range finder and everything worked flawlessly. They are working to this day.

Just last week I had a client that was hunting with us in Western Wyoming who hung his Swarovski binos over his saddle horn in the morning. He rode across a creek and his binoculars fell off into the creek. They spent most of the day there. The hunter did not realize that he had lost the binos until quite a ways up the trail. That afternoon, they decided to come out early from the hunt in the daylight to look for the binos and found them in the creek under a foot of water. They were recovered from the creek and worked perfectly with no sign of internal moisture.

Not everyone may be able to justify the price, but being an outfitter looking for giant bucks for my clients, I feel it is essential for me to be carrying the best optics on the market. Each little advantage adds up to more success, and it all adds up to more successful hunts. So for now I see no other brands that compare to Swarovski. I have looked through every brand on the market, and I am comfortable saying that there is nothing even close to Swarovski. If there was anything better out there, I would be using it.

About The Author:
Robb Wiley and his wife Dr. Brenda Wiley, along with their daughters Aspen and Autumn, make their home in one of the most beautiful places that God ever created, the mountains of western Wyoming. Robb is not only a phenomenal outfitter (Non-Typical Outfitters), he is a full-time, year round hunter and true man of the mountains. He spends about 300 days a year in the mountains that he calls home. When he is not scouting, guiding or hunting big game, he is hunting and trapping predators through the winter.