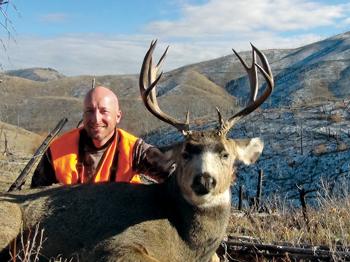 I’ve made my living specializing in guiding elk and deer combination hunts. The idea of going on one trip and bringing back more than one animal is appealing, but it’s not always the easiest thing to do. Over the years, I’ve developed some successful habits that maximize opportunity to fill multiple tags on a single trip.

Jeff Mikus with a bull he took targeting elk.


Habit 1: Prioritize
The pitfall of the combo hunt is the fact that people are inclined to spread themselves too thin. Instead of coming home with multiple animals, they find themselves coming home with no animals. I’ve found it best to focus on each animal individually during the hunt rather than trying to hunt two animals at the same time. For example, if you have an elk and deer tag, it’s more effective to hunt the very best place for elk and then hunt the very best place for deer (or vice versa), rather than spending a whole week in an area that is marginal for both.

I think of it like this: I pick my primary animal, which is normally elk, and then I designate my other tag as the secondary. I focus on my primary hunt, devoting more energy to harvesting that species by hunting the best times and the best spots for that species. I will then hunt the best spots for my secondary species. If I have two tags, I’ll often split my hunt by devoting 75% of my time to the primary species and 25% to the secondary.

Although Remi chose to take a smaller bull, he still had another tag in his pocket and capitalized on a great buck he spotted while packing out his elk. He came back and found the buck the next evening.

This article was originally published by our friends at Elk Hunter and Western Hunter magazines. They are just about the only print hunting magazines I read these days. I think you would like them, too. To learn more about them, CLICK HERE​
-Len Backus-​
This fall I’ll be doing a DIY Roosevelt elk hunt in Alaska with my brother, Jason. We’ll also have Sitka blacktail tags in our pockets. We plan on hunting two weeks, and the first ten days will be devoted to elk. We’ll hunt the best area for elk and focus on them. The last four days we’re going to move to a spot that is better for deer, and hunt deer for the remainder of the trip. Of course if we see a good buck while elk hunting, we can take it and vice versa, but by dedicating days in the hunt to each species, we’ll have the best chance of coming home with both.
Next page: 7 Habits of Highly Successful Combo Hunters >