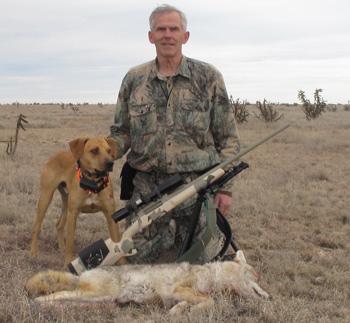 Have you ever noticed that seriously qualified people are often modest about their accomplishments? Recently I had the pleasure of being tutored in the fine points of coyote hunting by Tony Tebbe of Predator University in New Mexico and West Texas. Long before the end of our first day together it was clear to me that Tony is the real deal in predator hunting knowledge and the ability to teach it others.


Halfway through our first day together, I put this question to him: “Counting those killed by you, by your calling partner or by a client, how many coyotes have died in your presence?” He thought for a moment and then said matter of factly, “Oh, I guess around 5,000.” “Wow,” I thought, “I get to pick his brain for a couple of days in the coyote heaven of sagebrush dotted eastern New Mexico and the far western panhandle of Texas. He’ll probably be irritated with me for outing him about his 5,000 coyote experience.” Well, I say “Too bad, but the world of neophyte predator hunters needs to know.”


My first morning with Tony had him, but not me, a little frustrated with dry stands. Tony was frustrated because that many dry stands are so unusual for him on the 1 million acres of private ranches that he has available to take clients on. During breaks between sets he had a couple of cell calls from friends who were experiencing the same dry spell in another part of the southwest that same morning. But just before noon it was as though a switch had been turned back on and for the next day and a half a dry set would turn out to be a true exception.


I live in Wisconsin which I am told is one of the toughest coyote hunting states in the country. I tried coyote calling in Wisconsin in the past with dismal results. Then a couple years ago I started focusing my efforts on the western states. Since then I have hunted out there with a half dozen guys who are very experienced and generous with their knowledge. Tony is the latest and the most experienced. As we moved from one set to another, Tony would coach me on why we set up where he chose and what call he was using.

Tony has the best predator hunting land I’ve ever been on. Part of the formula for success in calling coyotes is a lot like the formula for fishing success. Get your pencil out and write down this previously secret tip to success: “You need to fish in a lake that has lots of fish.”


Tony has lots and lots of coyotes on his nearly 30 separate ranches comprising 1,000,000 acres of private land. Most have never heard a call from a hunter. On our second day we hunted 2 ranches for which Tony had obtained permission 6 months earlier but had never even hunted before. There were coyotes all over the place.

Tony said he can tell how old the coyote scat is by biting into it! (I had a very experienced coyote hunter contact me to say Tony should be able to tell the age without biting into it so I edited this caption to say: DISCLAIMER -- Just kidding)


One of the other ways in which Tony’s operation is unique is his dog, Gunner, a blackmouth cur. Gunner is used as a decoy dog and a retriever. Gunner would sit tight next to us when Tony was calling. As soon as I shot he was off toward the coyote. Even if he hadn’t seen the coyote before the shot he ran toward the sound of the bullet’s impact. Tony says Gunner watches from a calling stand better than most hunters. Simply amazing!


One time after a miss on a slowly trotting coyote at about 200 yards Gunner chased after the prey which ran out among some cattle. Between the sagebrush blocking the view and not wanting to pay to buy a dead thousand pound cow-on-the-hoof, I failed to get a second shot. Gunner actually caught up to the coyote and did his job of momentarily distracting him. I’ve seen video of a decoy dog interacting with coyotes and making for an interesting and more effective shooting opportunity. But we didn’t quite have that kind of situation in the 2 days. However, Tony told me that even at Gunner’s young age, he has been in on the kill of 197 coyotes. In a couple of instances Gunner saved us time in finding my dead coyote long before we would have. Tony breeds and trains this line of dogs.

We hunted in mainly sagebrush areas with some grass as well. Shot opportunities were not long at first, partly because I couldn’t always get good ranges in the flat terrain. The second afternoon we spent some time scouting and hunting the area that Tony said would most appeal to long range coyote hunters. Understatement! It is an area where the land drops off abruptly to a valley floor around 200 feet below. There is an access road on the ridge top paralleling it that stretches for miles.


I know I’ll be going back next year and we’ll concentrate on this long range coyote hunter’s dream spot. From the top we can call to pull the coyotes out of cover below. Shots could be from a couple hundred to a thousand yards long. Given the downward angle, and the Huskemaw brand range finder I’ll have by then, accurate ranges should be no great challenge. We’ll hunt in the morning with the sun behind us and the prevailing westerly wind in our faces. It is the best long range coyote hunting setup I have ever seen.

Looking out and down at "Long Range Ridge."

We had time for only one stand there on this trip and merely “educated” one coyote that Tony called out of the brush at 347 yards --- and I missed.


Tony also took me out for a night calling adventure, my first ever. We knew I had very limited time to do this as I was leaving at 3 AM for my next destination, 8 hours away and I needed to get some sleep first. But I really enjoyed the experience and look forward to a longer session next year. Tony has rigged a swiveling shooting chair with a rifle rest attached to the wooden platform on top of his truck. He would stand next to the seated shooter and call while we both turned to watch the bright beam of his spot light. I had a shot at a spot just below one coyote’s eyes, not quite knowing where to aim…was it facing us or turned right…or turned left? And then I had to leave for the night.


I shot 4 coyotes in the two days and missed…well, never mind how many I missed. It was not a proud moment for my shooting skills.

Tony also makes and sells predator hunting gear. He has a line of open reed mouth calls that brought the coyotes running. He also sells a unique quiet call lanyard and a coyote carry strap. Tony runs instructional and guided hunts, with daytime and nighttime hunting for coyotes and bobcat. We saw a lot of cat sign up on the ridge where they bed and den in small caves along the ridge. Tony also has hog hunts and jack rabbit and prairie dog shooting to fill in the time on a trip. And he’s a really nice guy to spend time with!

Len Backus is the owner of www.LongRangeHunting.com. He has been a long range hunter for over 10 years and is as likely to bag his game with a camera as with a rifle or a specialty handgun.