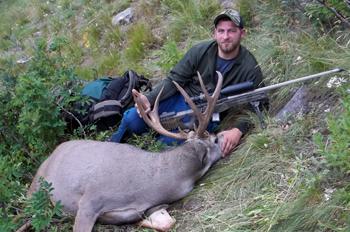 The next day we moved camp higher up. We didn’t see any more “shooters,” although I briefly considered a 25-26” wide 2x3 with short tines but good mass. That night we got a dusting of snow. The winds were much milder the next morning. We saw a couple of smaller bucks at first light. I was going to head up to another area, leaving Ron to glass the canyon below. I didn’t get more than a few yards before I hear Ron whistle. I knew what that meant and rushed back. He points below to the west side of the canyon. He’d spotted a decent buck. I looked at him through the binoculars and thought at first he was the 2x3 buck I’d seen the night before. Further inspection showed that he wasn’t quite as wide but had a little more mass, and better tines. He was a 3x3 with darker horns, overall, a better buck. I just wasn’t sure he was worth ending my hunt over, so we watched longer to make sure nothing better would come out.

Eventually I decided to go ahead and take him. Ron ranged the buck. “440 yards,” he whispers. Due to the terrain I had some difficulty setting up for the actual shot. I used a tripod in the rear of the rifle to get rock steady. I get the cross hairs on him solid, but now he’s out a bit farther, “Range?”…. Ron whispers back “482”. The ACI indicated a .91 cosine. I quickly do the math in my head, refer to my drop chart and dial the M1 turret. I told Ron I was ready to shoot….. Crack! The buck went down and I racked another round into the chamber. Ron tells me “You hit him good”, not whispering anymore. He started scooting himself backwards on his belly and turned his head downhill. I told Ron, “I’m going to hit him again” ….. Crack! I send another 165 grains at him, he drops his head and it‘s all over. He was between two clumps of brush keeping him from slipping to the bottom.

He didn’t actually move more than a yard or two from where he was when the first round hit. I didn’t want him dropping to the bottom as we’d have to pack him up that much farther (It was steep and I‘d been down there before). Ron ran back to camp to get the video camera and got a little footage before we dropped into the canyon. Getting our hands on him, we realize he’s a little better than we’d thought. His rack measures 24” to the outside and he’s a mature buck with good mass. Nothing like the buck we made a stalk on two days earlier, but I was pleased with him.

The bullets entered the vitals about 2-½” apart. Bullet placement was ideal. Terminal performance of the bullet was excellent. The bullet must have expanded very quickly… and the bullets didn’t exit. The snow was melted by this time and the meadow was very slippery, and (as mentioned earlier) steep. We had him boned out and on our backs in no time (Ron has some serious skill when it comes to de-boning game). I won’t bore you with details of the pack out… those of you who’ve done it, know what cross-country through a wilderness area is all about. We actually got over 90 pounds of meat… and it’s dang good.

By God, Jack O’Connor was right about the 270 Winchester. His writings about the 270 win being an excellent “long range” hunting cartridge seem almost prophetic to me after experiencing the ballistic abilities (both external and terminal) of this cartridge/bullet combination. I never tested it, but Berger’s 150gr VLD would make for excellent ballistics as well. I would expect to get over 3000fps with the 150’s in my 28” barrel. With a G1 BC of .531 it’s easy to see the 270 would still be a viable candidate. 
I’m so glad I’ve been able to include one of my all-time favorite cartridges in my long range hobby. This wouldn’t have been possible without Benchmark Barrels and I would like to thank them profusely. I definitely want to thank Ron personally for sharing in the fun… and work of the “high hunt” this year. I also want to thank Matrix Ballistics for making a high BC .277” bullet with good terminal performance. I am also grateful to my Grandpa Jack for giving me my first 270. I must also thank my Grandpa Ed for instilling hunting ethics, along with a respectful admiration of the game I seek. Ron and I plan to continue to experience all that Washington State’s remote wilderness areas have to offer. I hope many of you do the same… just not in any of my areas!


Lucas Beitner has been hunting big game since age 10. He mostly enjoys backpacking into the high country for black tails and mule deer in the Cascade Mountains. Lucas spends much of the off season scouting and hiking. He also enjoys competing in practical/tactical long range shooting matches
Reactions: corsair4360, SamuelBerryhill308, 1894C and 1 other person