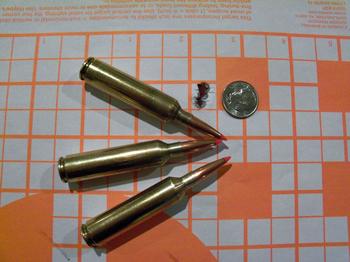 After a recent varmint rifle build using the 284 Winchester case (TVHA issue 84) I made a mention that a barrel was on order for a 22-284 Winchester chambering. This article will focus on the cartridge and load development along with a field test on the Barska Benchmark 40X scope.

I spent many hours reading through older publications regarding the 22-284 and searching web forums for load information. There is not a lot of info on this cartridge, as most shooters just write it off as an extreme overbore with diminished returns on powder burnt, along with short barrel life. To my delight I found an old forum thread that mentioned a 22-284 project back in the 60’s. Once I gathered some bits and pieces on the article, I found that it was a Guns & Ammo Magazine August 1964 issue entitled “6000fps World’s Hottest .22!” by Bob Hutton. I did a search on eBay for the old Guns & Ammo 1964 issue, and for $7.00 shipped, it now resides in my reloading library.

Reading the article makes me envious of the developers of that era, as mentioned in the article regarding velocities of 6585fps and showing some cartridge high pressure signs, then slowing things down a bit to 220 swift pressures clocking in at 6300fps, all the while keeping good 300 yard accuracy! Since 1963 when this .284 cartridge was introduced wildcatters have necked it from 6mm to .35 caliber with good results. I have kept a file with several pages of various loads used by past developers and decided to start with H1000 and Reloader 22. With a 1-9 twist in this barrel, I started out with 75 grain A-Max bullets loaded with a seating depth of one bullet diameter (.224”). A dummy cartridge was seated with a 75grain A-max and checked for proper chambering, extraction and ejection. All went very well and I must say, that is one impressive looking hot rod cartridge! I even think the crows outside kept quiet while I admired the round by the window thinking about down range performance.

I started with a new barrel ordered from M&L Enterprise in Oregon, short chambered in 22-284 Winchester, varmint tapper, stainless steel, finished at 27” long. The crown was cut to an 11 degree target contour then a PTG reamer and gauges finished the headspacing to the action. With this miniscule .224 bullet being pushed with a very large amount of powder I chose to have the barrel cryogenically frozen (300 Below, Inc.) to help slow the unavoidable throat erosion. Since this was a new barrel any accuracy improvement due to the cryo treatment cannot be confirmed. However, talking to several shooters boosted my confidence in the benefits of the process, so off it went to the deep freeze! With new 284 Winchester brass I start with a RCBS group G shell holder # 03, a form die that will size the case to a 6.5mm neck (RCBS # 58119), as I found with my 6mm-284 project after necking down to 6mm, the necks will need to be turned to a .014” thickness for best performance. Now with 60 cases formed to 6.5mm-284 it only takes a run thru a 6mm-284 full length die, then a 22-284 full length die (RCBS # 56052) to finish up the forming. Imperial sizing die wax was used during every step of the forming to avoid any crushed shoulders or necks, then primer flash holes are cleaned up, cases are trimmed to a uniform length of 2.1700” and finally necks/shoulder are annealed to eliminate any brass hardening from the forming process while necking down .284 to .224”. Since I had such great results with Federal 215 Magnum primers to ignite the large quantity of powder in the 6mm-284 load during the development stage of the previous build, I decided to stay with them while load testing the 22-284.