Coyote calling has been a passion of mine since I was a kid. I'm constantly looking for ways to improve my game. For years I've ran a Remington 700 chambered in 22-250 as my main coyote calling rifle. It's long overall length has always made it a bit cumbersome when crossing fences, despite its light weight. The sporter-contour 24" barrel produced great accuracy, but due to its extreme length, I never felt like attaching a suppressor to it. Having run many traditional rifles with suppressors, I knew that another seven inches on the end of the barrel would not be a welcome addition.

About 3 years ago I switched over to a Desert Tactical Arms SRS as my main long range rifle. I'm sure some of you have seen a few of my exploits with that rifle. Obviously the bullpup bolt action design is a huge winner for a great many reasons. Ever since that time, I have wanted to develop a version of the SRS that was much lighter than the standard SRS. This would allow me to run a long barrel for best terminal performance, with a short overall length that would be more suitable for running a suppressor. Today, that dream has become a reality.

The chassis used for the Predator Edition is the DTA Covert. It's just a bit shorter and lighter than the SRS chassis, and as a result it's a bit more maneuverable. The first order of business was to come up with a lighter barrel that offered incredible accuracy. I put in a call to our barrel supplier and had them crank out a custom DTA contour barrel that is similar in dimensions to a heavy sporter contour. The "tenon" on a DTA barrel is absolutely massive. This is due to the clamp-style action that is used. This offers us a remarkable amount of rigidity in the overall barrel length as compared to a traditional rifle. As a result, our "heavy sporter" contour is much more forgiving as it pertains to load development compared to that of a similar contoured barrel on a traditional action.

We partnered with TS Custom in Miller, SD on the production of these custom conversions. Travis is a first class rifle builder, and I have been using his work for several years now, so it was an easy decision. Lets take a look at one of these barrels getting spun up. First, Travis took some measurements from the bolt and barrel extension to ensure the extension was true and that we had full lug engagement. Not surprisingly, the DTA bolt and barrel extension were in perfect alignment with full lug engagement on all 3 points of contact. 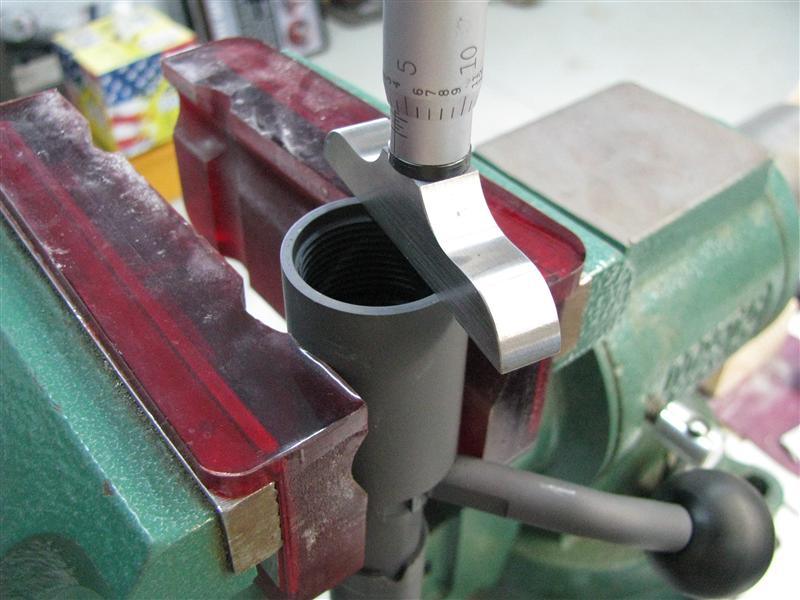 Next was to turn down the tenon that interfaces with the barrel extension. 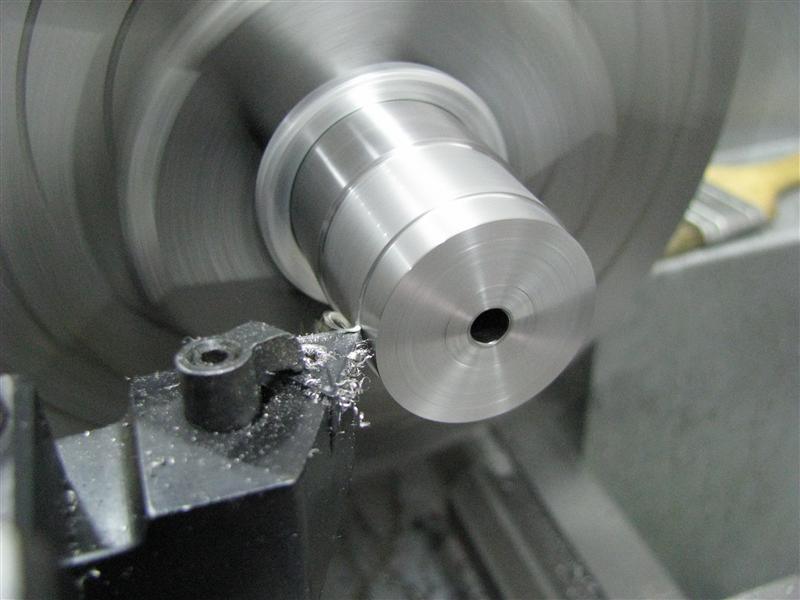 Once we had the threads cut perfectly, it was time to start on the chamber. This particular barrel is going to be a 22-250, so we start in with a custom chamber reamer to make a centering cut. We have found this chamber to work exceptionally well with 40gr bullets being pushed hard. We're keeping the exact dimensions close to the chest for the time being. 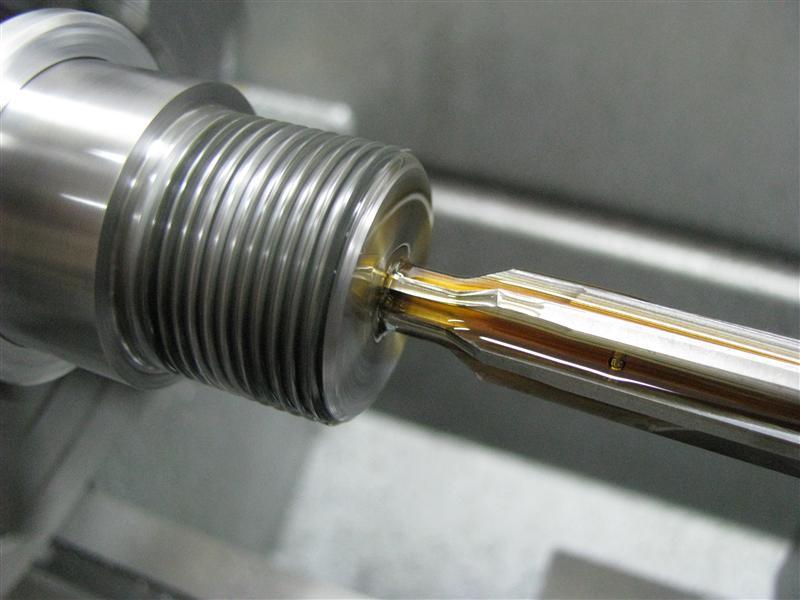 After chambering, we torque the DTA barrel extension to spec and thread the muzzle 1/2x28 to interface with a common .22 cal muzzle device. 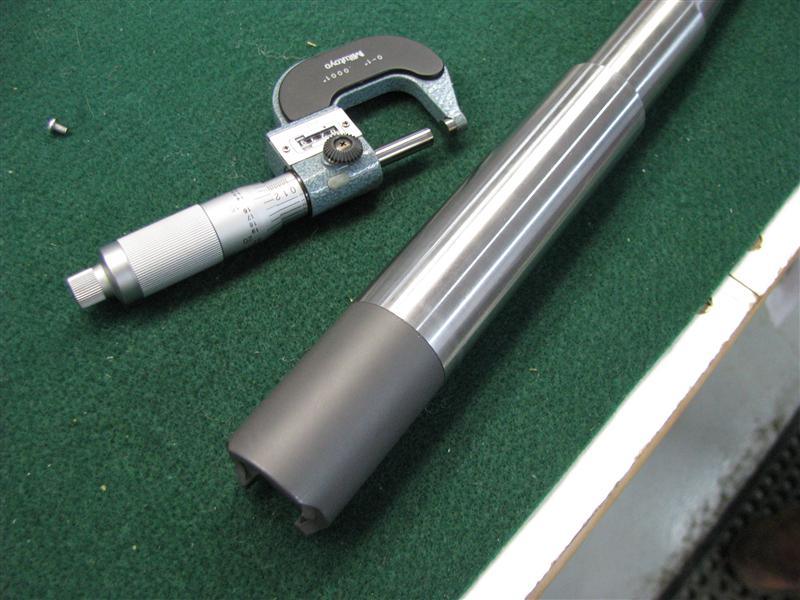 The end result is a predator rifle that exhibits characteristics unlike any other rifle on earth. A picture truly does tell a thousand words. The Primal Rights Predator Edition Covert touts a 22" 22-250 barrel with a YHM Phantom 5.56 Titanium QD suppressor and comes in at an overall length of only 38 inches with suppressor attached! Due to the unique weight distribution found on the DTA chassis, the sporter barrel and titanium suppressor add a touch of balance to an otherwise rear-heavy rifle. This is very desirable given the fact it is much easier to manage weight which is closer to you as oppose to farther away. 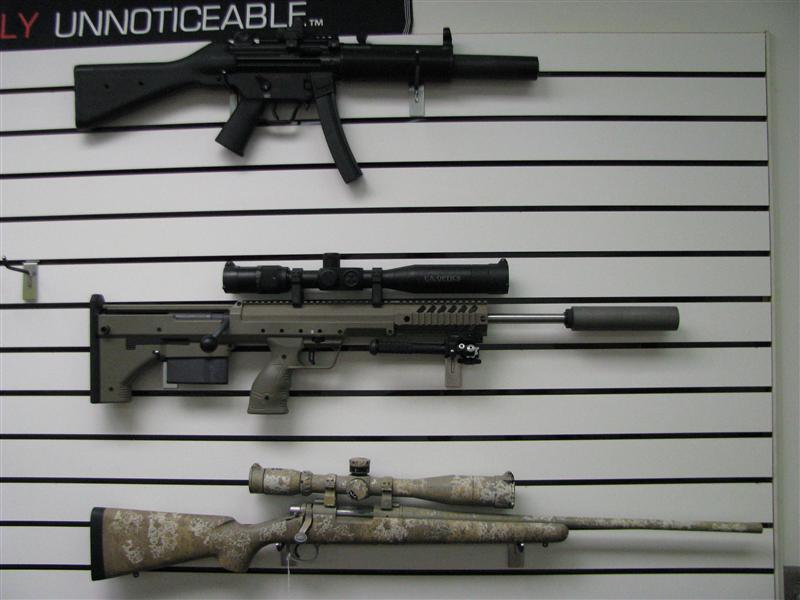 So we have established that the overall length is shorter than that of any other purpose-built coyote hunting rifle on the planet, but what about weight? Below you'll see that the DTA weighed in at 10.2lbs. Two tenths of that is the QD muzzle brake, so we'll call it 10lbs even. The remington 700 weighed in at 7.5lbs exactly. So the DTA is 2.5lbs heavier than the 700. On the surface this seems like a lot, however you must remember the weight distribution. When shouldered, the remington feels heavier than the DTA, with the DTA being hugely more maneuverable due to the shorter overall length. It's also noteworthy that the DTA is a magazine fed system, which holds 6rnds of 22-250 in the magazine for a total capacity of 7 rounds, compared to the remington 700's total of five rounds. 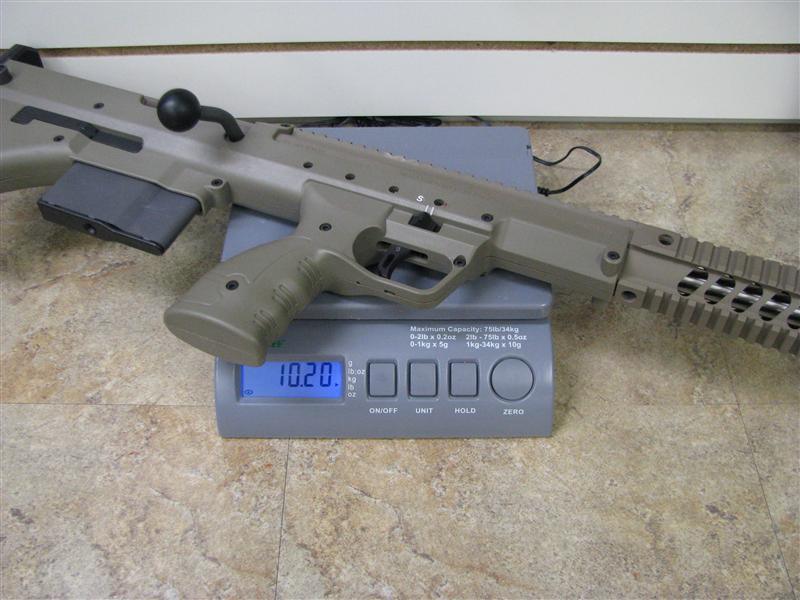 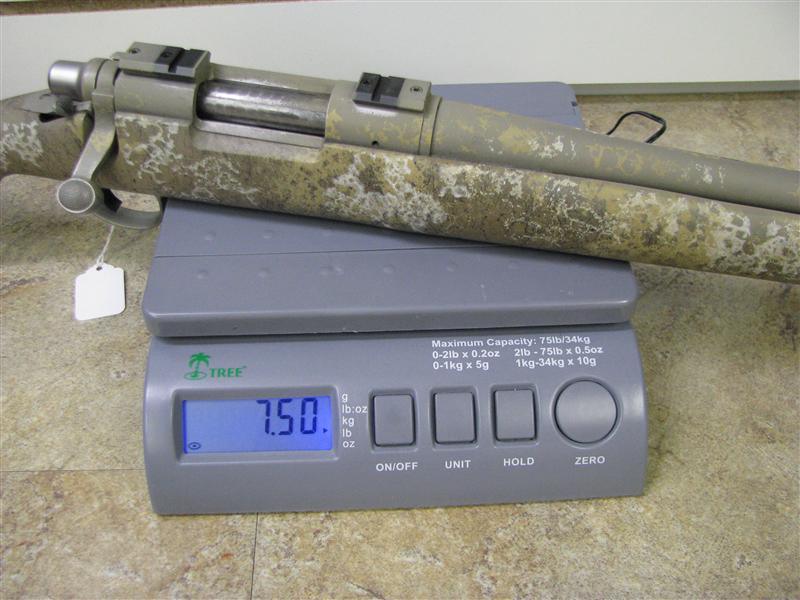 It's one thing to type this little summary discussing the attributes of this rifle, but it's another thing entirely to actually hold it in your hand and feel the totally superior handling characteristics for yourself. This setup quite literally is the fastest handling and most maneuverable coyote rifle on the planet. There has never been anything like it before.

Now for the best part. This isn't just a pet project to attain the best coyote calling rig for myself. No sir. This package can be yours if you so desire. We are now accepting orders for the Predator Edition rifle package and the individual conversion kits!

We can offer the above chamberings in any barrel length from 16" up to 26". We may be able to do a 28" or longer barrel as well, but we need to make sure the contour has enough meat there for threads if you are going to run a suppressor.

Depending on demand, we may offer additional cartridges as a stocked item. We can do a multitude of other cartridges to include some popular wildcat chamberings as well. One of the huge advantages to the DTA chassis is that you can change barrels yourself. This truly provides the best possible platform for running a barrel-burner cartridge like a 22-243. You can run a long barrel 22-243 for maximum velocity and terminal performance, without any of the overall length penalty. On top of that, when you need a new barrel, you simply order one, and the new barrel is a drop in part which you can accomplish yourself in less than 60 seconds. Shooters that get themselves a Predator Edition DTA from Primal Rights will find a new love for the hotrod cartridges of the past. There is just something fun about a 22cal bullet being launched at 4800fps, wouldn't you agree? The beauty of the DTA chassis, is that not only can you run our custom predator conversions, but you can also run any number of other cartridges from 308win all the way up to 338LM!

Lets talk dollars and cents here. The DTA Covert chassis itself is starts at $2,736 and the fully loaded "A1" style chassis coated in flat dark earth is $3,636. The chassis itself does not include a conversion of any kind. Our custom Predator conversions are priced at $1750. This includes one barrel, bolt, and magazine. Additional individual barrels are $1350. However, if you buy a conversion with an extra barrel, you can save $100 on the package price. This is a very common thing to do if you are shooting prairie dogs with a barrel burner cartridge. That way when you burn out one barrel, you can be shooting your other one while we are replacing your old shot-out tube with a new one.

A Primal Rights Predator Edition Covert with a single conversion in 22-250 will come to $4,486. The sticker shock value is definitely there, but if you have any experience with high end custom rifle building on traditional actions such as a Surgeon 591, then you know the price really shows an incredible value. Then you must factor in the huge performance and handling advantage that you are getting as well. While it doesn't fit with everyone's budget, there is no denying that it is the most incredible dedicated calling rifle that exists today.

To be clear about a point. Desert Tactical Arms does not have a "Predator Edition" rifle. That is simply the Primal Rights designation for our custom conversion. The chassis that makes it all possible is the DTA Covert! Desert Tactical Arms has the most forward-looking and innovative people of any company building precision rifle systems today. If you are unfamiliar with their products, be sure to check out the Primal Rights website as well as our Youtube channel. We would be happy to answer any questions you may have.

Over the next few weeks we will be putting fur on the ground with this rifle and will be sure to post frequent updates on the forums, so stay tuned!

If you are interested in purchasing your own Predator Edition DTA rifle, give us a call at 605-554-1911 or email us at [email protected].

Primal Rights is a premier-level stocking dealer for Desert Tactical Arms.
You must log in or register to reply here.