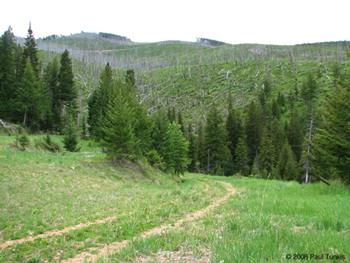 Big game season here in Montana generally ends the last Sunday in November, and so begins my nearly five month wait for spring bear to open. Coyote hunting over the winter helps keep me in shape and spring gopher hunting is something I’ve looked forward to most of my life, but it’s not the same as big game hunting. By April and May I’m ready to look for something larger and more interesting. Bears have the added excitement of going after dangerous game. Granted that might be a stretch, but it’s about as good as it gets outside Africa or Alaska.


The standard advice on western bear hunting is to hike around and glass likely areas. The givers of advice then go on to describe the general topography, meadows, old clear-cuts or burned areas and add some discussion on rifles and the like. There are some basic questions that often go unanswered, the most important of which is “If I don’t actually see a bear, how do I know if the area I’m hunting has any bear frequenting it?”


The advice about old clear-cuts and burns is a very good place to start; the last two bears I’ve killed have been near just those types of terrain. Bears like roads and trails and I always walk all the roads in my prospective hunting area first. After I’ve walked the roads I start on any heavily used trials I find that might intersect those roads. So besides a live bear what do I look for? Bear tracks are notoriously difficult to spot because of their soft paws so I pay very close attention to any wet areas, such as where a seep spring comes across a road or trail. Bears will often stop to drink at those spots and will leave tracks. If you find a track in a wet area examine the area very carefully, never step on the tracks and look for other indications of bear activity nearby. Has the bear rubbed off some hair on a tree? How about scat? Is it fresh?

A 35 Whelen round gives a rough idea of size. This scat is composed entirely of grass and plant material. It was found on a open road bed that get only afternoon sun, though black it was still soft, perhaps only a day or two old.


In one area I hunted a few years ago a bear had left 17 piles of scat on an old logging road over a distance of about a mile and a half. The age of the scat ranged from a few hours to over a week. It’s very difficult to make any hard and fast rules about how old bear scat is because of the nature of late spring weather and the location of the scat relative to sun exposure. A reasonable generalization is if the scat is black it’s been there a while. Bears eat large amounts of green vegetation in the spring and if the scat you find is some shade of green and still soft you’ve found an area where a bear has been recently, probably that day or even within a few hours. If it still feels warm, granted that might be a bit over the top for some folks, even better. I guess you could say that if you push it around and it steams a bit you’ve found bear hunting gold.

A bear completely tore the top off this tree. If you look closely you’ll see that this is the second time the tree has been “topped”. When I moved the tree top on the ground I found that the bear had flipped the rock over to look for insects.


If you’ve found tracks and some scat you can look for some other sign that will give you a hint if the bear in your hunting area is a boar or a sow. Male bears like to leave “calling cards” for other bears, male and female, in the area that they are moving through during the spring mating season. One of the most interesting of these is the “topped tree”. I’ve found more of these on old logging roads than anywhere else but I think that the bear is leaving these where it knows other bears will see it. As you can see in the accompanying photos the tree of choice is a young evergreen about 6 to 8 feet in height and about one to two inches in diameter at the point the bear chews it off. I think it’s a safe assumption that the height at which the bear chews the top off is about head height when it is standing on its hind legs. Most of the ones I’ve found were topped about four and a half to five and a half feet off the ground. A tree chewed off six feet or more off the ground would be a great indication of a very large bear in the area. I’ve also found areas with larger trees that have been chewed on but not broken off as well. Large trees with partially healed bite marks or small trees with dead tops can be an excellent indicator that the area you’ve found is frequented every year by the same or several boar bears looking for love.


Article Tools
Now I had a problem. I would be moving quartering into the wind, normally a good thing. However, if the bear moved into the open area of the clear-cut it could be downwind. I bet that the bear would keep to its preferred scavenging mode and either travel quartering or directly into the wind. I followed the bear up the mountain on the elk trail. Every few yards I’d find its track, but after a half an hour or so I finally lost the trail.

This bear appears to present a perfect shot. If you take your time as you should you’ll notice the small black shadow directly under the bear. In a few moments it will move revealing itself to be the sow bear’s new cub.


I now had a choice, either climb higher up the slope to find a place to sit and glass the open area or still hunt the black timber and jack pines. Since it was getting to lunch time I opted for the glass and eat lunch option.

This unused logging road provides bears with a perfect spring feeding area. Flat easy walking, lots of fresh green grass and forbs and water where the road crosses any spring run off streams makes for an ideal area to look for fresh bear sign.


A good glassing location is a ridge in the middle of a burn or clear-cut. If a road bisects the ridge line even better. You want to be able to see as much ground as possible. Even if you are overlooking a square mile or more of ground, remember you are most likely only going to see one bear. Don’t be too concerned about being spotted. Bears are nearsighted and spend quite a bit of time concentrating on what is just in front of them. The wind is everything. They may not see you but they will smell you every time. There is no such thing as “scent control” clothing or anything else when it comes to bears. If two molecules of your scent path cross a bear’s nose, the bear will know your age, weight, what brand of detergent you washed your socks in and will likely begin putting some serious distance between you and him. If you were ambitious enough and hiked to the top of the cut or burn you will most likely see the bear below you, and getting within 300 to 500 yards should be simple enough. In burns and cuts it is often easier to make a cross canyon shot than it is a shot at the bear from the same slope. If you just can’t get off the slope the bear is on, you may end up with a shot measured in feet rather than yards.

If you do make a nice cross-canyon shot, it’s a real help to have a hunting partner guide you to your trophy, since the low thick brush in these areas can make finding a downed bear very difficult. If you are alone, tie a few lengths of bright surveyor’s ribbon to the brush near where you shot from. Now take out your GPS unit and mark that spot, play attention to the elevation, was the bear above you or below you? Mark the downed animal’s direction from your shooting spot as best you can. If you have fair idea of the elevation you can do a back azimuth to your shooting spot and at least get you close to the downed bear.

Take your time; it is very important when hunting bears in the springtime to never shoot on sight. Bear cubs, especially in the spring when they first emerge from the natal den are small and easily missed. Shooting a sow with cubs is illegal everywhere I am aware of and totally unethical. You also need to check to see what kind of shape the bear’s hide is in; a big hairless patch on a hide makes for a poor trophy.

What happened with the bear I followed up the mountain? Well, that story ended at 20 feet so I guess it’s not a good story for Long Range Hunting…