These are not always your conditions, so let’s talk about how to do it the right way and get everything we want and more out of the HHA Optimizer Speed Dial system. First of all, it’s not limited to the 80 yard distance that is advertised on the package, so I’ll explain how to set it up for up to 100 yards, but you can take it as far as you feel comfortable shooting.
It takes more time and more shots to perform this process, but it's the single most accurate way to maximize your shooting accuracy with whatever type of scope you choose to use.
Here are the steps you’ll need to follow:

1. You will only be using the manufacturer’s stock scale on the HHA Optimizer Speed Dial Crossbow Sight Mount. If you have a different tape on the dial, remove it. Starting at 20 yards set your dial to the zero position. Now adjust your scope’s windage and elevation until you are in the center of a one inch bullseye. Do not shoot more than 1 arrow at any target or you will destroy your shafts. Adjust both elevation and windage on your scope until both are perfect. The windage is less important because windage should be adjusted at your longest distances, not your short yardages, but this will provide alignment until you move out to long distances.

2. Next, move back to 30 yards and shoot again, but this time you will only use your HHA Optimizer Speed Dial Crossbow Sight Mount to adjust your elevation until you are shooting the center of a one inch dot. Again, do not shoot more than a single arrow at any dot or arrow damage will occur. It’s best to use the same arrow each time to eliminate arrow differences from your site settings. When finished, you’ll need to record the setting for your HHA Optimizer Dial on a pad next to the 30 yard distance.

If any target images appear fuzzy, you may need to adjust your focus or your parallax adjustment on the left side of your scope until your image is sharp again.

You now have an accurate series of settings for 5 distances from 20 thru 60 yards. The other in-between distances for 25, 35, 45 and 55 should be easy to go back, fill in and verify until they are perfect as well.

4. At 60 yards you can use this setting only as a reference for what tape HHA would have recommended. Do not use this tape, it's just for reference purposes. I’ve found it to be close but not accurate for all my shooting distances.

5. Now move back to 70 yards and adjust your magnification to whatever power you are comfortable with. I personally prefer 5X at 70 thru 80 yards, but you can select what works best for you. The extra magnification will cause your crossbow to shoot just slightly higher (about 4 or 5 inches at 70 yards), so pick a spot on your target that allows you a little extra height until you are zeroed in. Record your power setting on your pad or the table I supplied at the bottom of this article and also adjust your HHA Optimizer elevation for the extra 10 yards from 60 to 70 yards. Once you are sighted in at 70 yards, record your settings from the HHA Optimizer Speed Dial Crossbow Sight Mount and continue to move to 80 yards.

6. Continue this process of recording magnification power and Optimizer Speed Dial settings at all distances you wish to ever shoot in 10 yard increments.

7. Always go back and sight in the in-between yardages and record those as well until you have a completed table that provides all distances from 20 thru 100 yards in 5 yard increments. Your settings will now allow you to use your scope’s variable power as long as you always use the same magnification power for any given distance.
I tape a reduced size version of this table to the butt end of my stock, so it's easy to reference while in the field or hunting. The precision is incredible and it works exactly the same as a sight tape on high quality competitive bow sites. We used to place our reference tapes to the inside of our bow limbs during competitions. The same principle applies here except we can't use the limbs, due to the amount of torque involved.

I also use my laser rangefinder when setting up at each distance. This keeps my crossbow aligned at each distance with what I'll use when hunting. Ultimately, you’ll need different settings for hunting than for your target shooting because of different weight arrows or because your broadheads will fly somewhat differently than your target shafts.
Here are two tables that should help you produce a versatile site scale for your TAC15 / 15i. One is blank that you can use to record your own settings and the other is an example of one that I use on my TAC15i, so you can see how it’s built. I tape a finished version of this table to my buttstock for easy reference when I’m shooting. 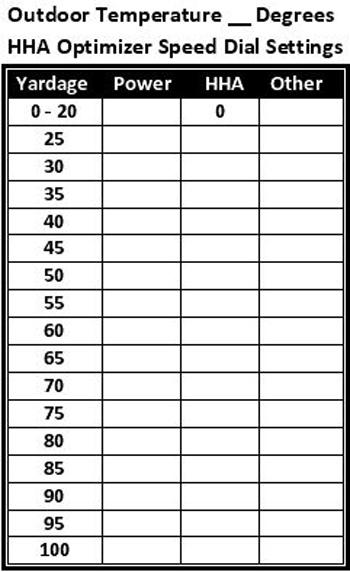 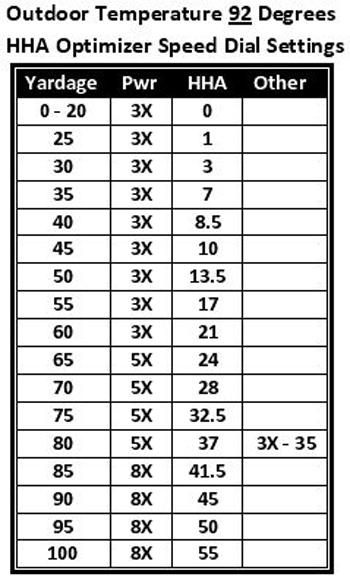 Jon Henry is an avid outdoorsman who enjoys both hunting and fishing. He has been shooting and competing in archery for almost 40 years, and began competitive archery in the NFAA at age 12 as a youth. He was a sponsored PAA pro archer for several years, and before that competed for 15 years in both the NFAA and NAA. Jon retired from competition about 8 years ago, due to a series of shoulder injuries that impacted my ability to sustain competitive performance.

Jon is in his mid 50's, and still very much enjoys shooting his bow and now crossbows as well. He is taking a great deal of his experience gained from building and tuning archery equipment and applying it to crossbow shooting, since they are very similar in many respects.

Jon's goal is to help as many new shooters gain a solid knowledge of their equipment as possible, so that we can continue to grow the sport of target shooting and hunting with a crossbow, until it becomes as popular as the other traditional forms of archery.