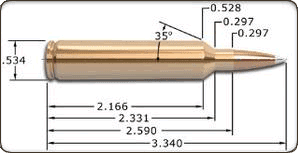 I think Nosler has a winner in their new 26 Nosler cartridge offering. The 26 Nosler when zeroed at 350 yards, has a maximum Point Blank Range of 415 yards. For quick shooting situations such as with whitetail deer in long bean fields this cartridge could be just the ticket. With whitetails you often don’t have much time to range and dial before the animal has moved on.

The 26 Nosler achieves 3,400 fps with a 129 grain Nosler ABLR bullet according to Nosler. We have shipped a couple to rifle customers already.The first one I shot for groups achieved nearly 3,400 fps firing a 140 grain Berger with its accuracy node down just a little in the 3,340 fps range.

Its accuracy is excellent. I fired a series of 2-shot groups while checking pressures at increasing weights of Hodgdon’s US 869 powder. I got one group of ¼ inch, a couple at 3/8 and a couple above that. After a total of 10 rounds fired I cleaned the barrel for the first time. Then I shot 5, three-shot groups with the same variance in powder charges and the best two groups again came in at 3/8th inches using 88.0 (3,340 fps - 26 inch barrel) and 88.5 grains of powder. This was with no variance in seating depth having been tried -- so there is even more potential to improve the group size.

I shipped one new 26 Nosler rifle to a customer last month and I took this second one to the shooting class put on by Non-Typical Outfitters last month out in the Wyoming mountains. When checking zero at 100 yards the rifle again shot a 3/8 inch, three-shot group. I fired shots as far out as 630 yards and had more good groups at those longer ranges too. All with almost no real load workup.