I have really enjoyed learning about long range shooting, load development and many other things here. Two days ago I was doing some practice shooting at 500 yards, today I killed a buck at 20 in deep woods. It got me to thinking what you all use and if you hunt in an area where a short range "woods" or brush gun is the ticket.

After the events of the day, I decided to keep my 45-70 for the rest of my hunting life. I've had it for about 10 years, and it's been on the shelf unused for about 5. I shot 3 or 4 deer with it when it was newer, but lost interest in the old big bore. It's a marlin 1895 and this year sports a cabale's alaskan guide fixed power 6x scope. Sighting it in resulted in a 1.5" group with two touching each other. I has been a good shooter for a lever from the begining.

As far as terminal performance, it's deffinantly terminal, a one way ticket to the ground with no delays, connecting flights or layovers. The buck today dropped on the spot, as would happen with most rounds at 20 yards. For whatever reason, I feel quite confident with this rifle out to it's effective range, and it's not let me down. It's become one of those "old reliable" things you have and hope you will always have.

I had not been in my stand 1 or 2 minutes when two shots rang out, seemingly very close. I knew the closest stand was about 100yds, and thought the guy in there was wanting a doe. A few seconds later, a coyote tore though my line of sight like his tail was on fire. I thought maybe the other guy took a shot at him. Seconds later a buck was heard tearing through the brush and comming into my vision in my direction. I saw multiple points, maybe not a trophy, but decided to shoot if a good shot was possible. He was also running as if on fire not looking like he would stop till Christmas. As I had my gun ready, he rounded a corner behind me and after passing a couple of large trees, stopped. Having the gun raised and pointed in his general direction, I had only to look though the scope to find the crosshairs right dead center of his chest as he faced me. That was his last mistake.

The other hunter came by in a few minutes asking "see a big buck come by? I think I hit him good". I replied that I had, and that he was laying near by. Inspection of the deer revealed a graze mark from a bullet on the top of the back just enough to break the skin, and an equaly leathal hit on the back leg going between the muscle and the tendon just right for a meat hook.

Surprisingly it did not bleed, not hitting the muscle or the tendon. The other hunter was pretty dissapointed, thinking he had a good hit and going on about not being able to fill his buck tag. I gave him the deer as party hunting is legal here, and he was more than happy to take it. It was no trophy, a small eight pointer, and I don't need more meat. All in all, it was a fun day with a little adventure and the joy of being in God's creation.
H

goose,
That is a cool story, so you killed the deer the other hunter shot previously and only injured him, and then you gave it to him, which he appreciated. He probably also appreciated you killed the buck also, it would have been a injured animal if you werent there.
Enjoyed reading. Thanks.

goose said:
It got me to thinking what you all use and if you hunt in an area where a short range "woods" or brush gun is the ticket.
Click to expand...

Goose, I used to hunt many years ago in upstate NY where it can get kinda thick at times and used a Remington 308 with a 18.5 inch barrel (anything less than 18 back then in NY was considered a pistol and would be illegal to own w/o a permit...which just about nobody could get) barrel had get this a ventilation rib on top and weighed 5.5 pounds but, great in close and with the 180gr could bust through some brush.

Nice story, thanks for sharing and great sportmanship on your part. Lucky for the deer as it didn't suffer a slow death probably would have from infectious wounds.

Hard to beat the 1300 winchester shootin Sabots, lots of knockdown power and very fast handleing. Coarse it helps when you grow up together I would have to say my all time favorites would be two "brush" rifles. They would be the 444 marlin and the 35 Remington. Both lever action with plenty of knock down power. I got the 35 Rem as a Christmas gift when I was 16 years old and was given the 444 from my Dad when I was 28, I'm pushing 50 and took a lot of nice bucks over the years. I really learn how to hunt Whitetail with them both. Dad never wanted to ever part with his Marlin but knew how much I really loved that rifle. He would always rant & rave about it and had convince me to use it on a hunting trip years back and thats when I knew what he was talking about. I would have to say for a lever action rifle it was dead accurate out to 100 yards but I never took anything with it out pass 50 yards. It would shoot through the thickest of brush with out fail and never did I need a second shot to finish the job, same with that old 35 Remington. If the terrain I was planning on hunting warranted the need for something short and light to carry I would take them both and have one of them as a back up. Needless to say I never needed that back up!
D

I have been using a Browning BLR in 7mm-08 for 2 years now. I have some 175gr round nose bullets that should work fine for big,heavy game but I normally use a 139 bullet for day to day hunting. The gun is kind of what I would call an all around gun because of the way it is set up. I know what most people think of see through rings. I am not a big fan of them for a "good" gun but they work for me on this gun. I put some Williams Firesights under the scope for the close in work or walking and a Leupold fixed power FX-III in 6X42 for the stuff out to 300 Yards. The gun has the worst trigger I have ever used but I have a load that will shoot MOA or on a good day .750 inch. Sometimes I can get 2 or 3 to touch! This rig should be good for anything in north America in my opinion from point blank to 300 yards given the size of the animal. A little farther if I had a good rest and learned to shoot it better at longer ranges. Here in central Texas I don't how to beat it for an all around gun.......Jim

My favorite deer guns here in MS are:

Im a big fan of AR15's for hunting rifles. I used my 6.8 SPC last year to take this really nice Michigan 9 point, at the extremely long range of 42 yards. I have since moved to Wyoming where you can count the number of trees within 50 miles of my house on both hands and still have fingers left over. 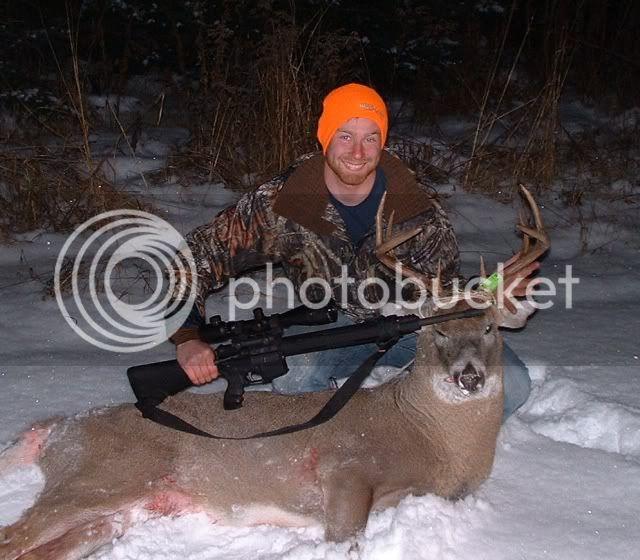 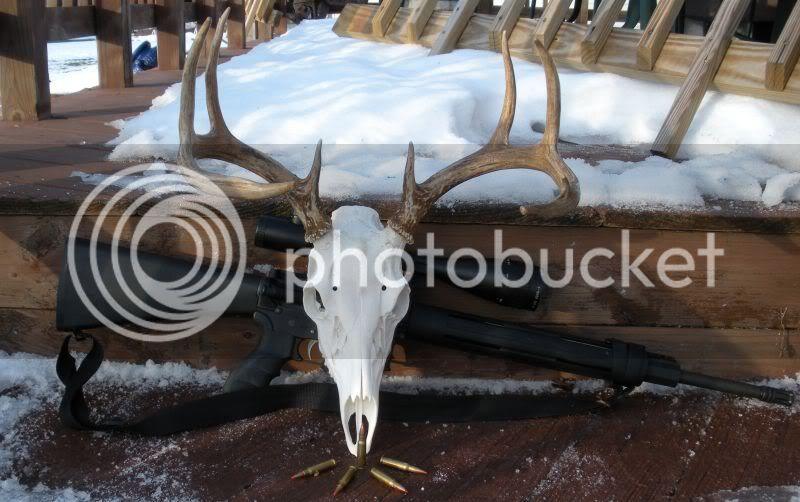 I would like a big bore AR-15 someday but dont really need one.
C

DK17hmr, nice looking buck!!! 42 yards, great that you didn't have to far to go. I think in wyoming your shots are generally going to be a LOT longer so do you plan on using the AR15? Just curious.
L

To date and the most lethal that I have used with great effect and enjoyment has been a 25-06 loaded with 120grn game kings. Nothing got away from me that I connected with. 5 shots and 4 deer. The miss took the jaw off trying to make an off hand head shot. Didn't want it to die slowly so, I finished it off after shooting its buddy and realized I didn't miss the first one.

These were all in seperate seasons as not to sound like I am incriminating myself. This was over a the course of about 15yrs. All shots were 50yrds or less.

Nosler makes a 110gr AccuBond that I will try to work with this summer to be ready for next fall's antelope and mule deer hunting.....I would feel comfortable with it on elk also at closer ranges.

I'm also a fan of the .45-70 as a woods gun. I've got a marlin 1885 cowboy rifle, with the long octagon barrel. This rifle absolutely stomps deer, especially with the lever revolution ammo. I really like hunting big crop fields with my 7STW and 300RUM, but .45-70 always goes to the woods with me. I named it "Honey Bun" (lol). She gunned down 4 deer on her first hunt, 3 at 15 to 30 yards, and one at 165. I'm using a 3-9 bushnell firefly scope on it, I like the heavier reticle in the woods.
Share:
Reddit Pinterest Tumblr WhatsApp Email Share Link

Good So Florida weekend in the woods

SC Buck, one in hand, one still in the woods