Why I want a 25 creedmoor because it's the perfect caliber.

GrayCreed said:
I really want a 25creedmoor. I have lots of reasons....
There's lots of balistic reasons but none of those make too much sense in a common sense world.
Let me start by saying this. I own a 6.5creedmoor. I also own a 7remag. I also am an abrasive, contrary, a smart ***. If you say up I say down if you say old I say new....
Ok so balisticly the 25creed is better because out of a 22" tube it pushes a bullet of higher BC faster than a 6.5creed dose itj a 26" tube. Also it has better barrel life than all the 6mm bores.

Ok now let's get down to the emotional stuff.
The 25 creedmoor is awesome because it has creedmoor in its name and that ****es off half the folk. This means it should be able to kill the velociraptor/ Trex clones fairly easily as well as be perfect to take on a hunt in the new sasquatch season in Oklahoma.
Next it's 25caliber and that's bound to also **** some people off because there's no milly-meeter equivalent. It's more American than the 30 cal because 30 cal isn't a fraction of an inch- but 25 cal is!!! It shares a bore with only a few cartridges- the 25-06, 257roberts, 257wetherby. and 250savage. Since it's better than all the 6mils it will make more people mad because it's 25. Simply put anyone who has a 25 cal has it on purpose because THEY WANTED to BE DIFFERENT.
So is the 25creedmoor perfect for my personality? Of course such a rebel caliber would have to be built on a defiance action....

What do y'all think? Will this kill more dinosaurs and make more folk perplexed or should I just stick with the 65.creedmoor....?

Let me know your most emotional opinions.
Does shooting a 1/4 bore make you contrary? If you shoot a 1/4bore did you decide to do it because you were contrary already?
Does combining the 1/4bore with creedmoor make the single most contrary cartridge out there yet?

I love my 25cm. Picked it for the Brass options, short action friendly design. 25x47 was another consideration.

BTW are we to the point now where the obligatory creedmoor bashing is more annoying than the fan boys who claim it's a great moose round?

TX Badger said:
I love my 25cm. Picked it for the Brass options, short action friendly design. 25x47 was another consideration.

BTW are we to the point now where the obligatory creedmoor bashing is more annoying than the fan boys who claim it's a great moose round?
Click to expand...

I prefer the Two Fity Hillbilly rather than the 25 Creedmoor. Just has a better (Redneck) Ring to it.
S

arizonahunter said:
Scheme
What kind of powder are you using in the 25-06ai
And where you been getting info from I really like my 25 creed but I’m having a 25-06 ai spun up to try the heavy Berger’s 25-06 has been my go to for 20 yrs
Click to expand...

My blackjack load is with Ramshot Magnum, just because it was handy at the time I started. I’m pretty happy with it though, good velocity, good accuracy, ES and SDs are respectable, measures well, and it seems to burn clean. I’ve got some of the Berger 133s that I’m going to try with something else, probably RL 23 since I have a few pounds that aren’t needed for anything else, and have had good luck with it in a standard .25-06.

Accurate/Ramshot sent me some .25-06AI data, but only up to 120 grain bullets. I used that and some standard .25-06 data to interpolate. I also just recently got a lot of good data for a standard .25-06 with the heavy bullets from Berger, so that’ll make things even easier. Both were quick to respond to email requests, and have always been good compared to other companies I’ve tried to get info from. I have started AI loads in the past (with fireformed brass) a little short (let’s say top 1/3) of the listed max in the standard version of the cartridge and just gone up slowly paying attention to the chrono. Seems to work for me, and I’m not one to push the limits, so at the first signs of pressure, I’m calling it good.

Good luck with yours!
O

The only reason I jumped ship on 20-06 was the lack of bullets back then compared to 30 cal but now there are many .25 bullets on the market and probably more that I don't know about.
I think you should pull the trigger GrayCreed and report how well it shoots so we all get to want one.

Component availability would drive me in these lean times. Even more so when the performance difference of short action cartridges mentioned in your post is not significant. Life is short. Buy something you can shoot. If that happens to be an AI, do not be dissuaded by fire forming, As for AI brass life, I loaded the same Remington 250 Savage case 20 times at the range one day without an issue. i would by better brass if available, but I can walk into my favorite LGS today and find a bag or two of brass and 250 Savage ammo on the shelf.

GrayCreed said:
How bout superformance or 100v?
Click to expand... 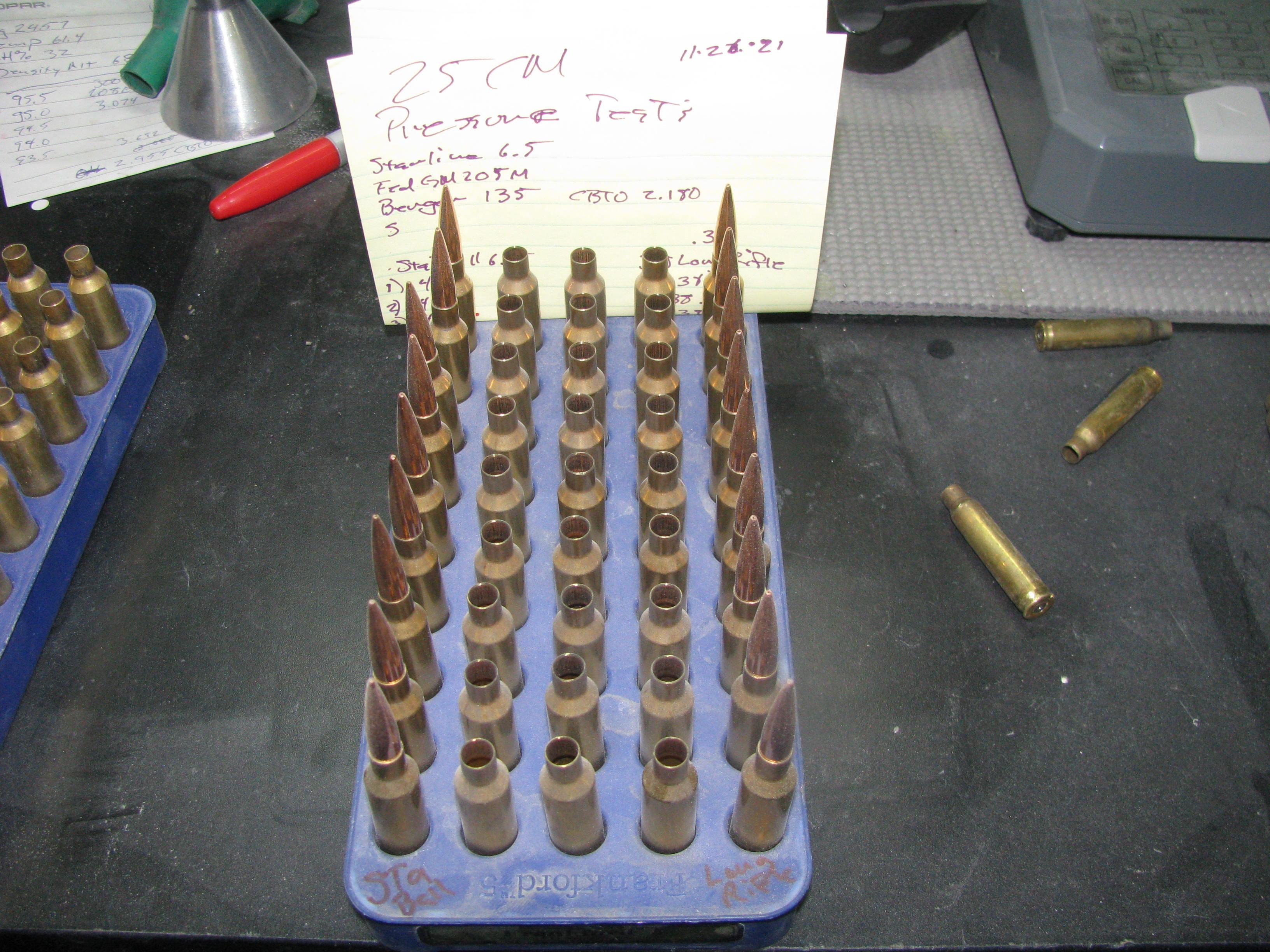 I Shot a 257 Roberts AI. for years and had a sweet light mauser in a 250-3000 AI.and to this day I don't why I sold them. Bulllet selection was so so. With all the new powders and bullets available today they would be fun to tinker with.
T

Have you had ejection issues with the 25cm brass from Alpha? Mine hangs up. Same action runs Lapua and Nosler brass without issue.

TX Badger said:
Have you had ejection issues with the 25cm brass from Alpha? Mine hangs up. Same action runs Lapua and Nosler brass without issue.
Click to expand...

Not at all. I get prefits from Xcaliber and those guy's know how to chamber a barrel!

The 1st Gen 25 CM Alpha is on the soft side, not as durable as Peterson & Starline. I don't have any of their next gen OCD brass, that's supposed to be the good stuff.
T

jasonco said:
Not at all. I get prefits from Xcaliber and those guy's know how to chamber a barrel!

The 1st Gen 25 CM Alpha is on the soft side, not as durable as Peterson & Starline. I don't have any of their next gen OCD brass, that's supposed to be the good stuff.
Click to expand...

It comes out of the chamber fine. It must have a thicker rim or something though because it sticks out of the action at a 45 degree angle and I have pull it free on every shot. I resized Lapua 6.5cm brass and use that for hunting with Blackjacks. It works great. The Alpha brass has been religated to plinking with 115 bergers. At least it helps me keep my loads separate.
R

I guess it's a Grendel!

Yesterday at 9:36 PM
Daniel Parker
D
O
Which Caliber and why?
2