I have a Weatherby Mark V in .300 WBY MAG that shoots sub-moa. Like others have stated, out of the box the rifle kicks like a mule. For years, I would shoot it just enough to ensure it was still zeroed and then hunt with it (less than 5 rounds a year). About 3 years ago I put a muzzle brake on it (extremely stressful time when I was threading the barrel ) but the results were amazing. Since then, it reminds me of my .308's in recoil and it is no longer painful to shoot. Congrats on your rifle.

Just a thought about recoil abatement from a "long time lurker"; I use shotgun recoil pads (specifically "GOOEY Pads") on all my high recoiling rifles (.375 H&H, 470 Nitro express double, .338 edge and my wife's .300 Win Mag) and they all no longer Kick but instead "shove" at the shoulder-much more pleasant (imo). If you can't find a GOOEY Pad I have heard great things about FALCON STRIKE pads ( [email protected]) for recoil mitigation. The only down side to GOOEY pads is that the rifles (or shotguns as the are designed for pellet slingers) have to be store muzzle down as the pad can take a set if the full weight of the weapon rests on the pad during storage for long periods of time. And, as an after thought, you would have the muzzle break marring the lines of the rifle.

That’s a very good tip. You can also have a muzzle brake installed for about 200$-300$ and use it for load development and take off when hunting if the noise bothers you
6

Make sure when you take the brake off to shoot the rifle again. That weight change will change the harmonics of the barrel and you will probably have a shift in impact.
B

Older Weatherby 300. Use 150 or 165 gr on deer and 180 gr on elk. Found the best group with Weathby brand ammo. Tried Remington and Federal. Federal comes close to Weatherby, but always hunt with Weatherby brand.
S

I have a bit of an interesting one, a 300 Weatherby that is a "pre Mk 5", built on a Mathieu Action and branded 300 Imp Magnum. From what I can gather it is one of Roy's early developmental rifles, so has a few years on it!! Have had it confirmed by the Factory that it is indeed one of their early ones!
Biggest it has taken on so far was a Water Buffalo by my son up in Northern Territory ( he declined using 416 Taylor) but crawled to within 40 yes over open ground and dropped this great bull!! VERY proud Dad! We use 180gn Woodleigh Protected Point projectiles. Do not do a lot of paper punching, but accuracy is all that we want for practical hunting, cannot remember missing anything with it!! Not sure how the rifle came to be in Australia, I believe I am its 3rd owner, don't know who #1 was, sadly.... The rifle behind is a 338 Win owned by a friend of my son's who dropped the feral "Scrub Bull" that was feeding with the Buffalo.... No cover, and no trees for a long way if the boys got it wrong...!! The shoulder shot went clean through the animal, quite spectacular performance on a heavy boned critter. 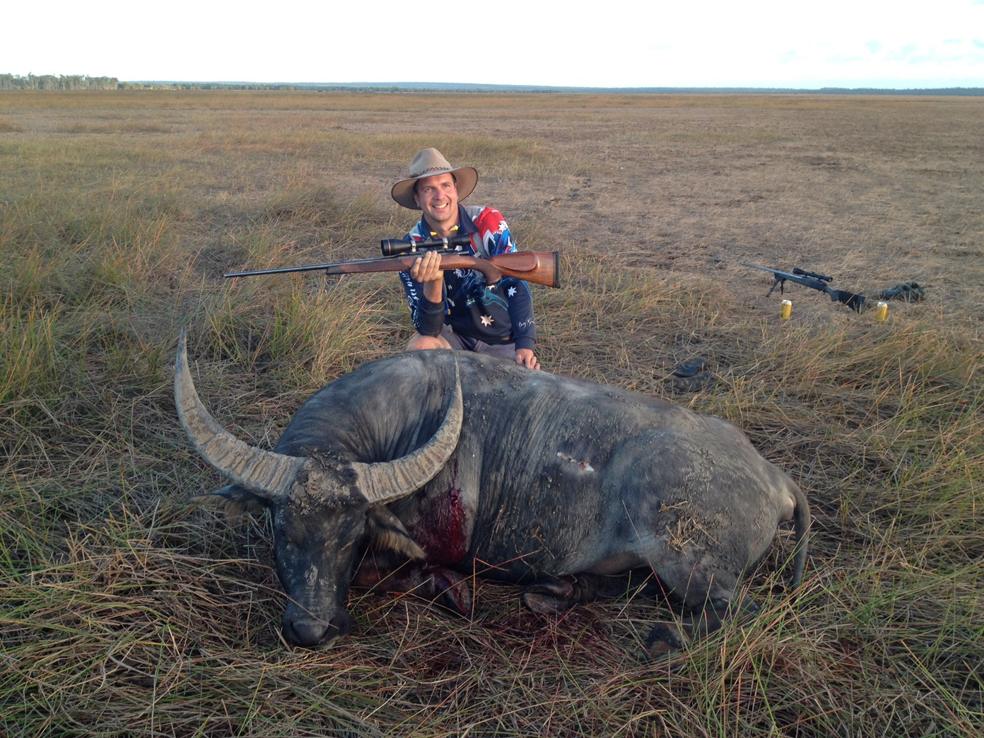 Bearjumper said:
Older Weatherby 300. Use 150 or 165 gr on deer and 180 gr on elk. Found the best group with Weathby brand ammo. Tried Remington and Federal. Federal comes close to Weatherby, but always hunt with Weatherby brand.
Click to expand...

There was a batch of both Weatherby and Hornady ammo that was not accurate on my friends rifles. I just pulled the bullets and used the cases for my loads

Wonderful round and rifle with mixed reputations. I've had a Mk V in .300 since 1987 and it was my one-gun do-it-all rig until a few years ago. The stock developed a little crack behind the receiver a couple of years after I got it and the factory replaced it for free with a gorgeous piece of wood. It's been to many states and Africa a bunch of times. I put more than 1000 rounds through it in the years around my first trips to Africa. It finally got re-barreled from 1:12 to 1:10 and re-blued at the factory and it's as good as ever. They looked it up and the gun (well, what's left of the original gun) is almost as old as me.

It likes 180gr TTSX bullets with H4831-SC and 215GMs. When I'm on my game it will do 1/2" at 100 yards all day long and it will bang steel to 1000 yards. IIRC, it has something like 0.325" of freebore! The thin barrel heats up darn quickly so 5-shot groups never look great. This gun has piled up tons and tons of game for me. The trigger isn't great, the thing wallops like a mule, and it's darn loud, but it hits hard enough to pile up moose, eland, and zebras. Weatherbys were good with Partitions, but they really came into their own with the advent of better bullets that handle the velocity.

Guides and PHs don't always like it. After really, really learning how to shoot it well I'm convinced many (most?) people just don't shoot magnums well. Nothing on earth will make up for poor shot placement and sadly the Bees have a reputation for making people shoot poorly.

After some shoulder issues I switched to a custom build .300 Win Mag with a 5" suppressor and I've never looked back. That thing is like some sort of recoil-reducing, noise reducing voodoo magic. I would have put the can on the .300 Wby, but it deserves to have clean lines and stay how it has always been. Have fun with it, shoot straight, and bring a sharp knife.
Last edited: Aug 26, 2020
G

26 years in the Air Force, much of it stationed overseas, kept me from hunting as much as I would have liked. But when I got the opportunity, my 300 Wby mark V bought in 1972 (therefore 12" twist) has served me well on alll my hunts for mulies and elk with 165 and 180 gr Nosler Partitions. Never felt the need to switch to anything else these 40 plus years. Took my last mulie at a laser measured 327 yds and never felt the recoil! I did misspeak above a bit however. My yearly pronghorn falls to my 257 Wby Mark V.

What powder and grain weight please

N8iV Warrior said:
I also have a 300 Weatherby Backcountry model with a Terminator T3 muzzlebrake on it loaded with 185 Berger VLD hunters bullet. Shoots tighter groups all day long with handloads.
Click to expand...