We sneak into AND out of our calling stands

This is not really a new photo, but is illustrates this lesson of sneaking into AND out of the area.

Long ago I learned that the coyotes sometimes don't come from where you think they will, they can be anywhere, so as a general rule I always stand up slowly and glass the entire area before leaving. That's when I spotted this coyote up on the hill about 250 yds behind me. The coyote had not seen me yet, and if I tried to call it closer it probably would have gotten into the rocks between the pickup and myself and winded me or my footprints into the stand. So I decided to take the shot from there.

On many occasions, I've seen and shot coyotes before I ever started calling. On other occasions, things like this happen. There have been times that I didn't see a thing while calling, but spooked out or spotted and shot a coyote or cat while walking back to the truck. It pays to be stealthy the entire time while hunting coyotes, not just when we're calling. Hopefully this gives some tips to the new predator hunters here. 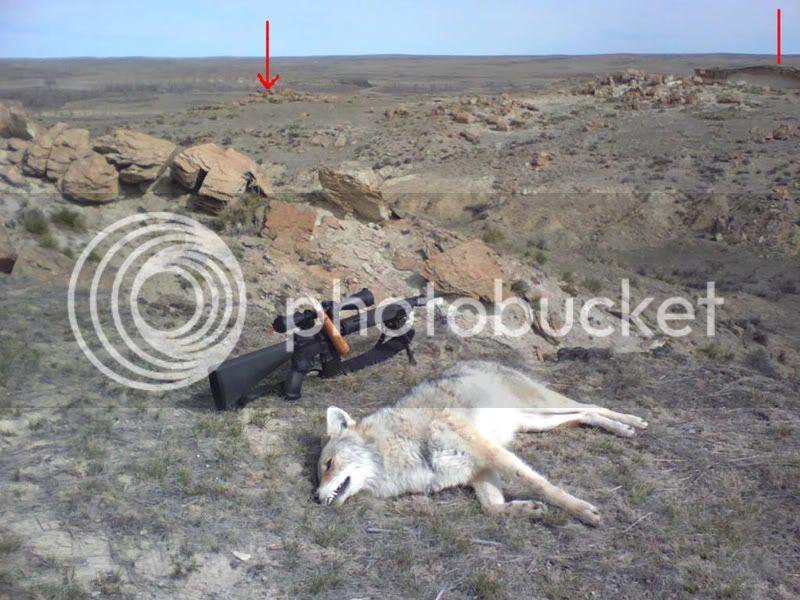 +1
If anything it sure won't hurt 'sneaking' around.
Sure wish I got to do more coyote hunting when I'm in WY. It sure is different hunting out there but some things can be used everywhere.
H

Thanks for the tips, will be hunting coyotes this weekend, so every tip is useful now.
C

Yea, the majority of the state is treeless. If you look real close in the photo, beyond the rock pile where I was calling from is a creek and some trees.

You will find trees along some drainages, creeks and rivers, towns, and in the Mountainous parts of the state. But the majority of Wyoming is basically high desert or grassland/plains.
C

Do we call into