My wife and I headed over to my brothers in Wenatchee last Wednesday to hunt for the rest of the week. After chasing around and stalking a few bucks on Thursday and Friday that ended up being 2 points (Eastern Wa has a 3 point min), Katie was begining to wonder if we would ever find a legal buck. On Saturday, we had a first time hunter friend with us and were hoping to find some deer. We headed to a new area and started seeing deer right away. I was glassing down in a timbered canyon bottom and found 2 legal bucks hanging out together in a small opening. We had Katie and my buddy get setup to try to get a double. After awhile the two of them got on target and the scopes dialed in. The bucks had enough and moved into the timber. We decided to walk down the ridge and see if the deer had come out on the other side of the canyon. After crawling over deadfalls for about an hour, we were unable locate the bucks. On the way back, I looked down the in the canyon bottom again, and there stood another buck in the same opening. I hit the swaro and came up with 402 yds and got Katie setup for the shot. It was at a pretty steep angle (.9 cosine). The buck was quartering away, so I had her dial up 3.75 MOA and aim for the offside shoulder. The wind had died down and I told her to send it. The 243AI barked and the buck hit the dirt instantly. A couple other hunters had drove up behind us during the shot and couldn't believe she hit the deer, and that it fell where it was standing. We ending up getting him out just in time. A prescribed burn was going on and the winds got it a little out of hand. We had ash hitting us and covered the truck on the pack out. When we got to the truck, the fire was about 300 yds away. Jesse and I wanted to thank Shawn and JR for the classes we took with them this year. Jesse took a buck opening weeked at 730yds with his 338 Edge. The advice, education, and friendships we formed with Shawn and JR were of great value. Thanks guys. This was Katies longest shot on game, now she gets to try again in Montana next month. 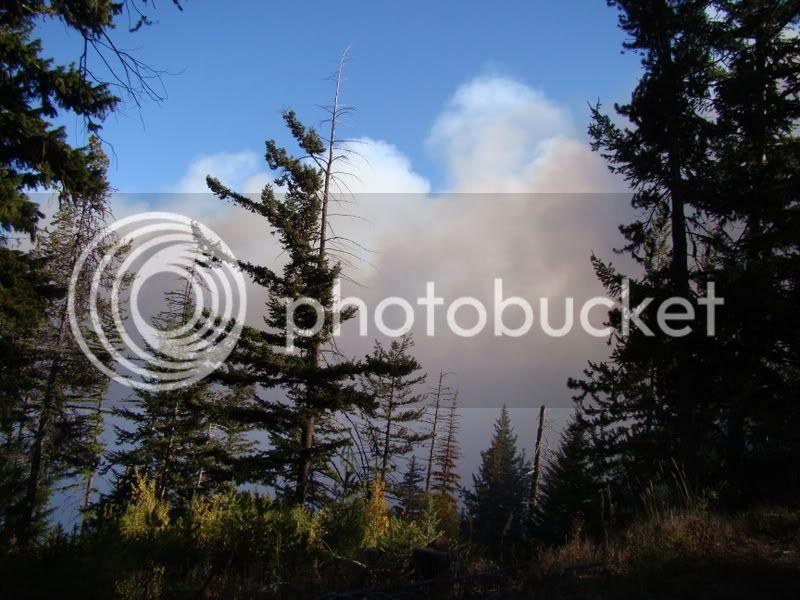 Congrats to Katie on a nice buck. At least she's one of the few successful hunters in Wa. this year.

Great write up and I like the way the picture is posed and set up. You can be proud of her, as I'm sure you are.

Nice writing, great picture, awesome shooting, what else can you ask for?

that is a really nice picture. and good story
T

Thanks guys, I am very proud of her. We got married in June this year and hunting trips are kinda our honeymoon. It is just extended out over a few months. She can't wait to get back to Montana next month.

Dick, are you heading out this weekend? I am going to go over and hunt with my brother and see if we can find a spike or two. He has been seeing quite a few over the last few weeks. I think I remember reading that you hunt North of E-burg, kinda puts us in the same area.
S

I'll be up in the Colockum before daylight Saturday morning.

Sure hope the critters cooperate as well as the weather.

I will keep an eye out for ya. My brother said Mission Ridge got a little snow yesterday, but it will probably be gone by the weekend. Good Luck.
T

Congrates to your wife. What bullet did she use?
S

TMR said:
I will keep an eye out for ya. My brother said Mission Ridge got a little snow yesterday, but it will probably be gone by the weekend. Good Luck.
Click to expand...

We had snow, I think last Tuesday, at 5,000' and above in the upper Chinook Pass area but it only lasted about a day.

Heard yesterday that it was snowing hard on Little Bald but that may not last either.

TheReeper said:
Congrates to your wife. What bullet did she use?
Click to expand...

We use the 105gr Berger VLD's in all of our 243 AI's. We tried the 115's but weren't real happy with them. We are running the 105's 3260-3340fps depending on the rifle. The 115's can't be driven fast enough in that case to really show much advantage.
Share:
Reddit Pinterest Tumblr WhatsApp Email Share Link