Allow me to introduce myself. My name is Greg Dykstra, and I am the owner of Primal Rights, Inc. The services and products we provide range from rifles, handguns, support gear, as well as all manner of firearm training. I have written for many publications over the years, as well as had my work re-published in more places than I can remember. I have been hunting all of my life, and have been a competitive shooter for the last decade in varying levels of seriousness. Though I enjoy all forms of shooting, my passion has always been with the precision rifle.

Only within the last year or so, have we decided to offer our products and services under with the intention of putting Primal Rights and Huron, SD on the map. As part of this effort, we've decided to become a sponsor on this great forum. We run a forum of our own on Primal Rights &bull; Primal Rights -- Home, however it does not encompass nearly as many people as the membership here. Certainly not nearly so many avid long range shooters. My staff and I are very much looking forward to working with as many of you as we can handle.

Now that the introduction is out of the way, I'd like to talk with you a bit about a recent mule deer hunting trip in eastern Oregon. Some of you may have seen the thread I started after returning from that trip. I bagged a trophy 5x4 mulie at 945yds. It was truly the hunt of a lifetime. There were some things that were different about that trip, than any other hunting trip that I have ever been on. It is these things that I want to talk about specifically, as I believe they could be of great value to some of you as well.

The trend in hunting gear has always been to attempt to make the gear we use as versatile as possible. You always hear about the latest do-it-all wonder gadget that is coming out. I see them every year at SHOT Show, and dismiss 99% of them. Every once in a while something hits that is actually very useful. The Gerber multi-tool is one of those items. How anyone ever got along without having one of these in their hunting pack is beyond my understanding, and I'm sure I'm not alone in this estimation. Sometimes you come across gear that becomes invaluable to you for various reasons. We'll talk about a couple items I used on this trip that contributed to making things very enjoyable for me.

The first of these is range finding binoculars. The specific set I was using were the Swarovski EL Range 10x42. Typically I would scan the landscape looking for my prey, then when found, I would pull out my Vectronix range finder to get an exact range. Sometimes I would then be disappointed due to the fact the critter is well beyond the capability of whatever rifle I was holding onto. I doubt I need to spend any time expounding on the quality of the glass used in these binoculars. Swarovski has long been known to produce some of the best binoculars money can buy. This set was no different. I had my eyes stuck to these things for hours on end during the first day of the hunt. So much so that the insides of my eye sockets were getting raw from the pressure applied to them by the ocular housings. The true beauty was the ability to look at something while glassing, and instantly get a range to it. This was nothing new to me, as I've been using the bushnell fusion 1600's since they came out. However, the clarity of vision provided by the Swarovski was in a whole different category.

The style of hunting I was using on this trip was completely new to me. I scarcely call it hunting. I found a tall ridge or peak, that overlooked an area known to collect deer during morning and evening, glassed until I saw a trophy deer, and then put a firing solution together for the kill shot. Typically I would do something similar to start, but once I saw something, I would head off on foot to close the distance as much as I could before taking the shot. This year, I wanted to try something new. Instead of closing the distance, I wanted to take the shot right there from where I was. In this aspect, there were two things that were vitally important to my mission. First was the ability to spot the deer. The second was the ability to place an accurate and precise shot on the it when the time was right. 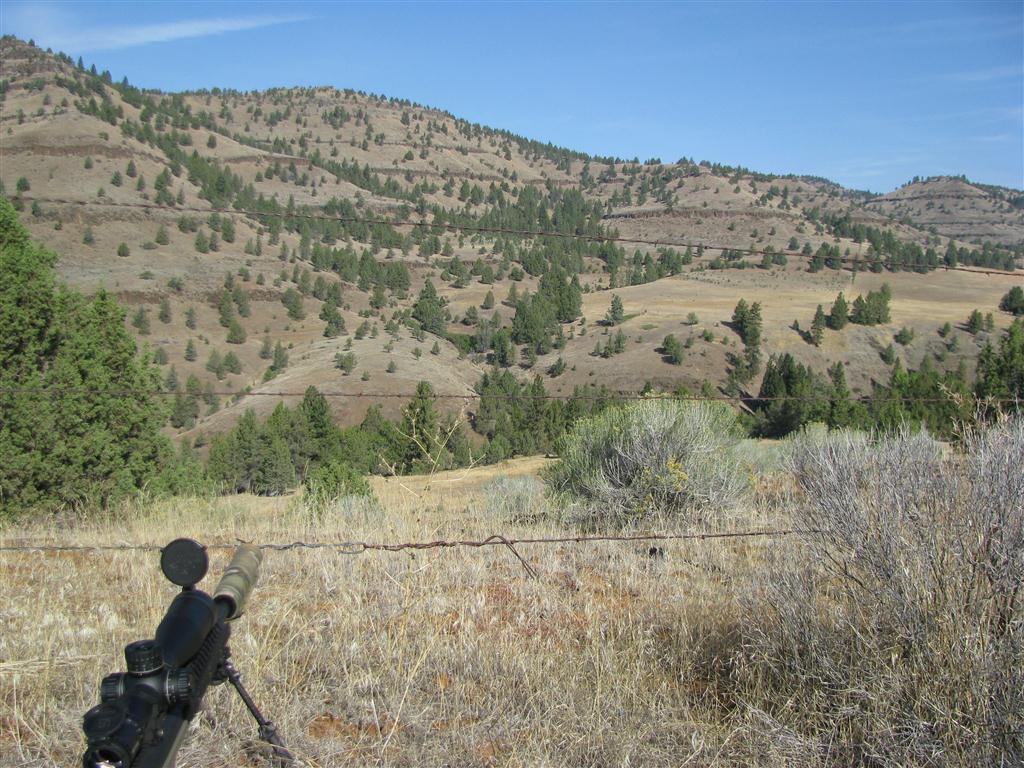 Spotting the deer was made quite easy by use of the Swarovski bino's. The mule deer blended into the eastern Oregon landscape very well. I was able to easily identify moving deer out to a distance of around 2000yds, and stationary deer out to around 1500yds. Obviously this was very dependent upon the individual situation. Deer in the open were more easily identifiable than those that were sitting under a juniper tree during mid-day. The true benefit of having a range finder built into my binoculars was shown in the "point-and-click" effectiveness of spotting deer, and then getting an immediate range on the deer, or perhaps a tree they were standing next to. The Swarovski's ranging capability on a deer seemed to stop at around 800yds depending on conditions. It just lacked the precision beyond that to determine whether I was ranging the deer, or the ground behind the deer. However, it got me a close enough idea to identify landmarks at distances that I would be comfortable shooting to. It worked on trees and cliff sides out to about 1400-1500yds very reliably, with the farthest hit on a huge chunk of rim rock at just past 1900yds. For precise ranging on deer, I moved to my Vectronix PLRF-05. With it, I could accurately range deer to distances of over 2000yds, and due to the 3D function, know with reasonable certainty that it was the DEER I was ranging, and not the hillside behind it. To summarize, having an outstanding binocular with a good range-finding capability is something I don't intend to go without on any hunt in the future. The second piece of gear that was instrumental in my success is the DTA SRS rifle I was using. Now I'll tell you right up front that we do stock and sell DTA rifles and accessories. However, if you look back on the Primal Rights forum as well as everywhere else I post, I've been singing the praises of the DTA SRS platform for a couple years now. We've only just begun selling them a few months ago. As such, to say I'm familiar with the SRS would possibly be the understatement of the century. It is almost the only rifle I ever shoot for the last couple years. SRS rifles see at least 99% of my trigger time, and for good reason.

When began planning for this hunt, I set a maximum distance limitation on myself of 1500yds. Meaning, I wasn't going to engage a deer any further than that. This decision was made due to the fact I was shooting a 338LM, and also due to the fact I was at least 75% competent at 1st round hit's at that distance on a 12" target. This is obviously in good conditions. If the wind kicked up to 10-15mph... that distance would need to be dialed back accordingly in relation to my prior success in those conditions at various distances. I keep a detailed log book for this reason. If you haven't read my old article on rifle databook's, I encourage you to check it out. In any event, I am very in touch with my own capabilities, and very honest with myself in regard to what I can do in specific conditions.

It takes thousands of rounds to achieve that kind of confidence. The DTA SRS lends itself to building confidence like no other rifle in existence. With the SRS, I get to train with the exact rifle, base, rings, and optic that I intend to use while hunting, without the added cost of using 338LM to gain that firearm familiarity. My SRS spends most of its life in the form of a 22" 308! That is extremely cheap to shoot with my 175SMK handloads. This lets me spend thousands of rounds putting the chassis, the optic, and the mounting solution through the rigors of every-day use. Then when it's time to get serious, a 60-second caliber conversion change is all it takes for me to go from 308win to 338LM. I have 7WSM and 6.5creedmoor conversions for my SRS as well. I use it in precision rifle matches, when banging steel with friends, and for any big game hunting that I do. It also finds its way along with me when predator calling. The SRS truly is the most versatile weapons system on the face of the earth. It's tacti-cool looks can scare people away, but once you get used to it, you find yourself shooting nothing else. 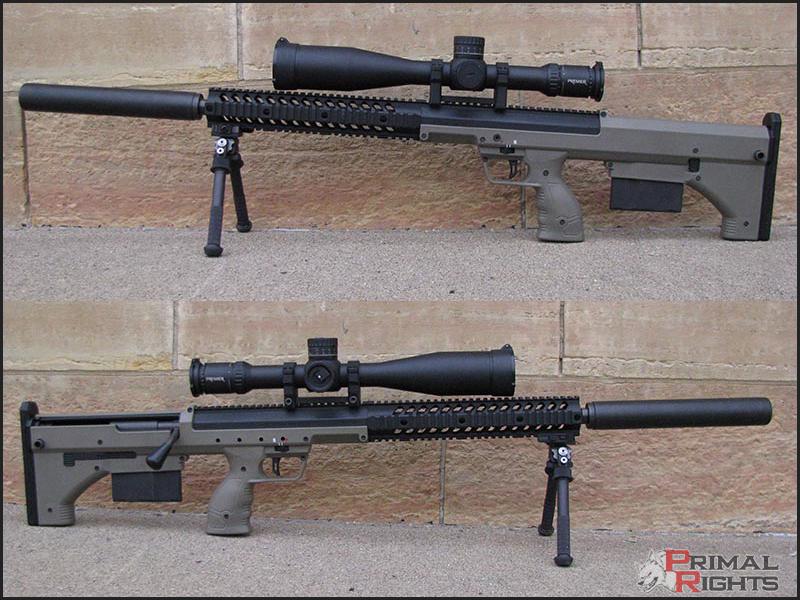 On this trip, I brought all my conversions as well as a backup optic. The two years worth, and thousands of rounds of experience I have with this specific rifle and others like it are worth its weight in gold when building confidence to take a shot like the one I did. To the degree that when I got behind the rifle and quartered the vitals on that deer standing 945yds away, there wasn't a singular doubt in my mind that he was coming home with me.

Bullpup rifles are here to stay. True long range hunting performance is measured in portability every bit as much as it is cartridge capability. The Defensive Edge LRKM that I recently saw pictures of is another shining example of this fact. Those that have used a good bullpup bolt action don't have to be told why this is. The DTA SRS is unique and stands apart due to it's ability to adapt itself to suite multiple roles in seconds.

I did a review on my SRS with detailed pictures on my site. I would encourage you to check it out.

If you are in the South Dakota area, and would like to shoot an SRS, just get a hold of me and we would be glad to setup a time for you to give one a try. Otherwise, if you are interested in purchasing an SRS or any other DTA product, call, email, or PM me any time. Service goes well beyond the sale is a core value that we have in abundance here at Primal Rights. We can help you determine which DTA rifle is best for you, as well as help you with load development, ammo & gear selection. We would also be glad to share some tips and tricks specific to the SRS that will help you be proficient with it.

Any questions you have, feel free to ask them here. There's only one thing I like doing almost as much as shooting... and that's talking about shooting! Thanks for reading, and we look forward to working with you!
I

Greg glad to see you over hear
A

Very nice write up.
That's a pretty fancy stick you have there also...might have to do some reading on it.
Welcome to the forum!

ICANHITHIMMAN said:
Greg glad to see you over hear
Click to expand...

Thanks. We'll see if I can keep my politically correct hat on for long or not.
J

Location
The cold part of Montana