Quintus said:
I am certainly not a 2 miler, or a one miler for that matter, but I have made waves in baked clay shooting the Ma Duece at targets a quite a ways off. Does anyone still shoot John Brownings 50 anymore?
Click to expand...

Tom Erickson said:
I'm 9 years away from retirement so ido have some time. If I wanted to shoot to 1 or 2 miles for a bench gun what cartridge would you go with
Click to expand...

Bryan Litz has expressed that the .375 caliber has about the optimum ballistics offering for ELR. Also, the Barrett .416 is a great option.
B

freddiej said:
I think I will just watch this one. too many voices stating different directions. I agree with certain people and laugh at others.
I will give just one part of the puzzle that I do not see people talking about.
What ever caliber you go with, what ever weight slug you go with. my best advice from experience shooting 1,000 yards to 3,000 yards is what ever twist you think you need.. jump up to the next tightest twist, you will never regret it. the reason is this; what ever you think will stabilize the slug, by the time your slug reaches 1/2 to 3/4 of the way there, it will have slowed enough to need that tighter twist. for example, I shot 190 grain 30 caliber slug from a 1:10" twist by the time I hit 1,500 yards the slug just destabilized even though 1:10" was good up to 200 grain slugs. after a certain yardage the slug will slow it's speed and it will slow it's rotation; both will ruin stabilization. that is why I advise you to go with a tighter twist than you think you need. I learned my lesson many years ago.
(1 mile to 2 miles and beyond) personally I would select the 408 Chey Tech, a straight taper fluted barrel, Barrel length 28" to 32", tightest twist I could get, a good muzzle brake, comfortable stock, 30 MOA offset bases, steel rings, the highest magnification/highest quality scope I could afford, and a high quality steel bi-pod with sand bags. I would also get all the reloading equipment for the caliber and the brass uniforming tools.
The funniest part about all this.. I can say that most people out there will disagree with me.
use my advice as you see fit.
later tatters.
Click to expand...

Do you think you can get the same result by using a lighter weight bullet as a different twist barrel? I can swap out bullets a lot cheaper than a new barrel.

Axl said:
Any of these will work: 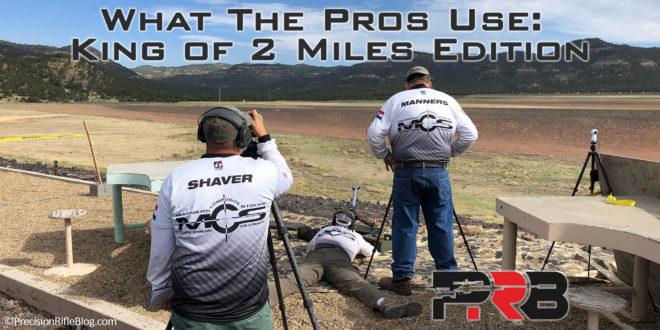 What The Pros Use – King of 2 Miles Edition

Earlier this week I traveled to watch the King of 2 Miles rifle competition (Ko2M) at the NRA Whitti...

Very good report. Thank you.
B

hrhunter said:
I am glad I just bought one!
Click to expand...

I shoot at a local club almost every weekend and there are several there that shoot 6.5 creedmoor and they all shoot damm good I built a 6 creedmoor and when I shoot in the sniper match they kick me in the foot and get behind me and talk trash trying to get me to pull a shot you can’t deny the fact that the creedmoor is a shooter

Seems like you may be thinking that in 9 years you’ll be shooting ELR...

If you wait 9 years to make the order it’ll be over 10 years before your shoot’n...

At the time in my life that you are now in I ordered a rig that would allow me to go well beyond 2k yards, though I haven’t gone quite that far, but almost.

I supplied the barrel, action, trigger McMillan A5 stock and NF NXS scope All purchased from folks on this forum except for the scope.

I’m an Idaho resident and hunter. Had a 270 Allen Mag. Went hunting with a fella who tagged a bull elk with a 7mm Allen Magnum. Two shots impacting a hand width apart at 996 yards. Decided 277 cal wouldn’t cut it.

As a guy who is continually desiring something bigger than what I have and learning that continually up sizing gets costly I went for the biggest cartridge available.

Working up loads was nothing more than duplicating Kirby’s load with the SMKs. Took her out to 1225 yards and kept the accuracy spec.

Tried some CEBs. Nothing they sent me would stabilize over 800 yards. Was disappointed..

head. I may have been his tester for their .375 offerings...

He’d send me some. They’d tumble. He’d scratch his head, turn out some more. I’d shoot them and they wouldn’t tumble.

Problem ... group size was more than double that of the 393s.

Made my report to Steve. We chatted and decided the it would be better if I sent him the rifle, dies and such,. He could develop and test at his convenience.

That’s when FEDEX shipped the stuff to some industrial complex in Indiana.

. Steve received some kind of a nuclear grade funnel.

The guy that got the gun used the markings on the action, googled, called Kirby. Steve got the stuff, after quite a while.

He developed a 411 grain offering that stabilized at 1300 yds and was well under 0.5 MOA he quit developing and set her to me.

The last I shot her the 411s with in the area of 150 gr RL-50 were toned down to 3025 FPS due to the Jamison cases. With the Peterson brass Kirby says there’s another 150 FPS or so available.

From observing the destruction of small cooler size lava rocks way out there I think that 3025 is adequate.

Being this big girl was intended for hunting and the Idaho rifle max legal weight is 16 lbs and the big girl came in at 19 and I never seem to be able to getaway with anything, some weight had to go.

Dumped the heavy NXS for a Luey LR/T,
Removed as much stock fill as practicable,
Milled metal from the action bottom.

She now weighs 15.98 pounds, with the LR/t and one scope ring removed, on the only certified scale in town. This is the configuration she is in now, when Steve developed the 411s and when I validated the 411 performance.

My personal situation is that being 77 years of age, enough body parts removed that the all of the one remaining are vital and humping a heavy rifle in any terrain is not in my dreams it’s time to put the safe queen on the sacrifice altar.

An above post indicates that a super hooty rig, enough to do what you want can be had for $6000.00.

Without the scope but otherwise Lock-Stock-Barrel my Big Girl can be had for much, much less than $6000.

That's a lot of good deals in there. Mine was all full retail beside the chassis, action and trigger, spending twice as much on a scope and including about $200 in reloading dies.

I'm glad you are a good shopper but not many people are patient and lucky enough to find deals like that on their first build.

Buck Fever said:
That's a lot of good deals in there. Mine was all full retail beside the chassis, action and trigger, spending twice as much on a scope and including about $200 in reloading dies.

I'm glad you are a good shopper but not many people are patient and lucky enough to find deals like that on their first build.
Click to expand...

I think it's probably my 15th build and finding the same deals on all my projects. Time is needed and research in finding the best prices. I've got most of my components together for a new lightweight hunting rig. Waiting on the carbon wrapped barrel. If you have time and patience, it's pretty easy to save 50%+ on a DIY vs Purchase of custom rifle.
B

blueprairiedog said:
I shoot 338 rum also what Bullets and powder are you using
Click to expand...

I'm not quite there yet but my first load is going to be CIP magazine length with 250 grain Berger Elite Hunters and RL25. After it is broken in and a load developed I will probably buy some Warner Flatline 256 (I think) for single load ELR, starting with RL25 if it seems like it will work.

Buck Fever said:
I'm not quite there yet but my first load is going to be CIP magazine length with 250 grain Berger Elite Hunters and RL25. After it is broken in and a load developed I will probably buy some Warner Flatline 256 (I think) for single load ELR, starting with RL25 if it seems like it will work.
Click to expand...

I'm hoping it will be my everything under a mile load.

I decided to go lite because the solids are going to be similar weight and it's going to be easier to fit the magazine than a 300 grain.