A good scope will last beyond your lifetime and will allow for a calibrated holdover which an open sight won't.
T

I'm mighty partial to the model 71 Winchester. Got a few in .348 Win and a Miroku made Browning copy of the 71 which is a high grade gun that someone before me paid to have reamed out, rerifled and rechambered to .416 Alaskan. Big medicine for a lever gun.
A

My second post on this. I have sold off the Marlin's and the model 94's .The last two were a Remlin 1895 GBL 45/70 and a Winchester 94 A/E .356. I found them sub standard.
I would like a Miroku made 94 takedown and am looking for a Miroku 1895/ 270 win. They are as rare as Henry's teeth.
The 95 Remlins feel like they are made of pot metal to me and I had trouble with the AE too.
The Marlin's also have a ridiculously fat forearm, far thicker than the flat reciever. This was an impediment in a saddle scabbard, I didn't like that added thickness under the offside stirrup.
For the the money the Miroku BLR is the best value, mine are takedowns, with scout scope arrangements. It is so easily cleaned and I can bore sight the barrelled front section. Bottle neck chamberings and front locking bolt . Tune the trigger if you like.
4

timo308 said:
I'm mighty partial to the model 71 Winchester. Got a few in .348 Win and a Miroku made Browning copy of the 71 which is a high grade gun that someone before me paid to have reamed out, rerifled and rechambered to .416 Alaskan. Big medicine for a lever gun.
Click to expand...

I sold my Win M71 about three years ago, big mistake it was in mint condtion the things we do to buy the next gun.

Years ago at a gun show I had a chance to buy a large black and white studio still photo from the filming of Winchester 73, didn't have $200 to spend. Herb Parsons was using a 71 to perform the aerial trick shots for Jimmy Stewart. 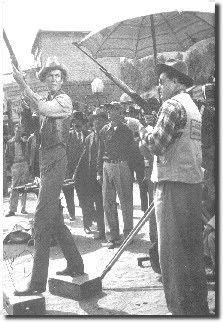 I got a couple of Winchesters and Marlin in 38-55, and really love that caliber, espically if you reload. This will do you well. If you are left handed I would lean towards the Winchester with vertical ejection vs Marlin and right hand ejection.

What about the Winchester 88. I have one in 308 that is smooth as butter and accurate
T

The old double thirty (30-30) is an american iconic cartridge. With its dated design is still capable of accuracy rivaling the 6ppc and 30 br. In fact the first sub 0.100 agg EVER in BR comp was from a 30-30 based wldcatt (basically a 6.8 spc setback 30° shoulder blown taper 6mm neck)

There is another BR shooter 100/200 group/score that on a dare started shooting a standard rimmed 30-30 (no wildcatt) and won numerous events and championships with agg averages sub 0.100.

Just look at that nice long neck of 0.400. Skim the rim to a even consistent small headspace and never have to bump a shoulder ever.

For a leveraction, Ackley it by running the AI reamer in and add 150-300 fps with handloads yet still will shoot standard ammo accurately.

That would make for a nice somewhat unique lever action yet one you could shoot the widely available ammo in if you needed and have it fireformed for later handloading. With the poly tipped bullets and powders available can really add perf to its old FN/SP heritage.

Theres really cool things to do with leveractions. Take one of the newer browning Winchester replicas and have it rebarreled to 50 Alaskan That would be a serious thumper in the brush.
.
Last edited: Feb 19, 2020
L

I appreciate all the responses. Sounds like Marlins are generally better shooters, and easier to scope, though a bit heavier, while the Win Model 94s are a little handier.

My decision may be made for me though, in short run. My brother passed away just recently, and I will wind up with what had been my late father's Henry, in .45 LC. It won't be a deer hunter, but just a plinker. Not the way you want to to get a gun though; I have more guns than I can shoot, but only had one sibling.
4

Jlsmith said:
What about the Winchester 88. I have one in 308 that is smooth as butter and accurate
Click to expand...

Sorry for your loss! That 45 will drop deer just fine with the right load at reasonable range.-- And I d like to think your brother and dad would be smiling down on you when you drop a deer with it!
You must log in or register to reply here.
Share:
Reddit Pinterest Tumblr WhatsApp Email Link