The Defensive Edge 300 Terminator is alive!

The 300 Terminator is Alive!

My dad and I had a conversation that went something like this, “Hey kid you should design a 300 Terminator round.”

“Because the 338 Terminator is such a bad ***, I think you should have a Terminator round in any caliber that has long range bullets.”

“Well don’t waste your time telling me about it, let me know when we have everything to build one.”

So started the conception of the 300 Terminator, I drew up reamer prints for chamber and sizing dies and waited and waited and waited. The reamers of course arrived right on time, patients might a virtue but it is not one of mine. With the reamers in hand a special present project from the wife of a good friend of mine came up almost the same day the reamers arrived. It was decided that the first 300 Terminator would be an 8.25 lb (with 2.5-10x42 NXS) light weight hunting rifle. This rifle would sport a 24”, Hart, # 4, fluted, 1-9 twist barrel. It didn’t take long for dad to get the rifle put together and all finished out. I was excited to test the rifle despite the short barrel length. I had anticipated a longer 30” or so barrel but more on that later. I went to the QuickLoad program and pulled up the case feature I had previously designed as the 300 Terminator. With a H2O volume of 122.4 gr, I ran the powder selection tool and adjusted the pressure to compensate for the +P throating that all Terminator rounds have.

I was pleasantly surprised to velocity predictions with the 215 gr Berger Hunting Hybrid of 3072-3172 fps with my favorite powders despite the barrel length. Knowing the rifles intended use and adding my preference for H1000 powder I chose to work with it first (QL predicts a 100 fps increase using VV N570 powder). I loaded a single shot pressure series working up to 99.0 gr of H1000 and stopped just shy of ejector marks and primer cratering. This was just a good solid pressure to work with and while QL is scary good at charge weight and velocity predictions the 99.0 gr load rang in at 3146 fps at the muzzle. The load charge and pressure were spot on, but we actually got a little more velocity than expected. After determining max working pressure with H1000 and the bullet just touching the lands, I started on accuracy testing. I typically do this by taking the max operating load and changing the seating depth. I started by shooting 3 shot groups seating the bullet deeper in the case by .005” increments. With the larger Berger bullets I seldom have to go further than .025” into the case and this was no exception. At .010” into the case the 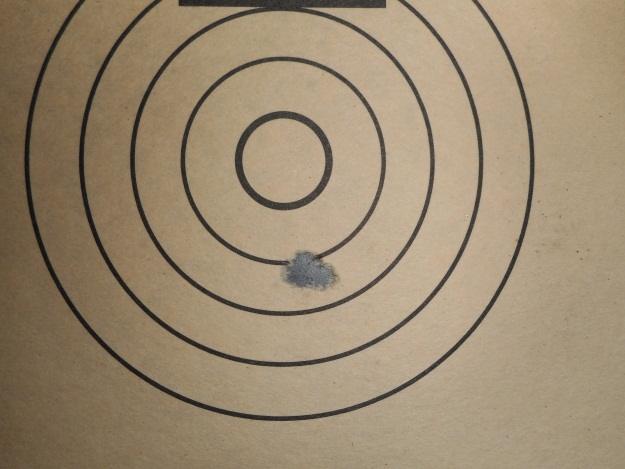 215 gr Berger’s stacked into a nice .214” group. So the final performance tally is sub ¼ moa, 3147 fps with a 215 gr bullet, ES of11 fps, super stable powder and a rifle field ready at 8.25 lbs. Our new Micro Slab brake did an excellent job taming the recoil. I was testing a 7 WSM with 168 Berger’s and no brake right next to it. The 300 Terminator had substantially less recoil than the unbraked 7 WSM despite having a ton more horsepower.

I had envisioned this round as a heavy rifle round and while it clearly is a laser in a shorter barreled rifle it is still my intention to run this in heavier rifle platforms like the LRKM. Below are the specs for 30” barrel velocities with the 230 gr Berger Hybrid Target. 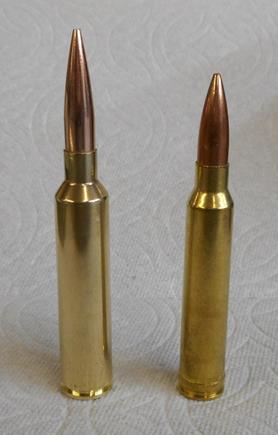 It is performance like this that really closes the gap on my beloved 338 rounds. I just like using big bullets on stuff. However, when you look at the numbers and more importantly the actual field performance there is not a ton of difference until the distances get huge. When the distances get huge, like over 2000 yards I have to give the edge to the bigger 338’s as the things I have seen them do at big distance defies the computer generated numbers in terms of terminal performance. If you are looking for less recoil, a little more laser like trajectory inside of 1000 yards or something that is just not a 338 the 300 Terminator is here to stay.

Very nice looking round Shawn! I am sure you will have some interest in this one. I need to swing by and talk brass with you soon......rich
S

Call and stop by.

Shawn Carlock said:
Call and stop by.
Click to expand...

Shawn, looks like a pretty nasty cartridge, I foresee it being very popular.

Also, is the parent case for the Terminators the Lapua or RUM (.404 Jeffery) case? I used to know this, but for some reason I'm drawing a blank right now...
S

They are Lapua parent cases. We have 338 Terminator headstamped and formed for it hope the others will follow.

Sounds killer to me!!

That sounds awesome! What kind of barrel life would you expect? Could a mag bolt face be opened up safely to run this?

You can build it one y rifle that has or can be opened up to a 338 Lapua bolt face. Other than our Terminator action, other custom actions in Super Mag bolt face or even a Rem 700 would be a good choice.
S

After having several requests to compare to other long range offerings in 30 cal here is how they stack up. I tried my best to compare only solid stable long range viable powders in each chambering to keep everything similar to actual field results and not just what was the extreme possible velocity.


300 Terminator vs Other 30 Caliber Magnums


Note: if a barrel brand is specified we had actual results, if not the numbers were generated by QuickLoad. Our actual load data was all generated with stable powders so we disregarded the powders on QL that we know to be unstable or not suitable for LR work. We tried to use the best performing powder in all cartridges to compare apples to apples so to speak.
J

Shawn Carlock said:
You can build it one y rifle that has or can be opened up to a 338 Lapua bolt face. Other than our Terminator action, other custom actions in Super Mag bolt face or even a Rem 700 would be a good choice.
Click to expand...

jpgolffl said:
Would I be able to run a 300 terminator in a AI 338 CIP mag? I was plotting on a 300 norma but that extra speed is very tempting!
Click to expand...

S
The 284 Terminator is alive and well!