The Dakota gets a makeover 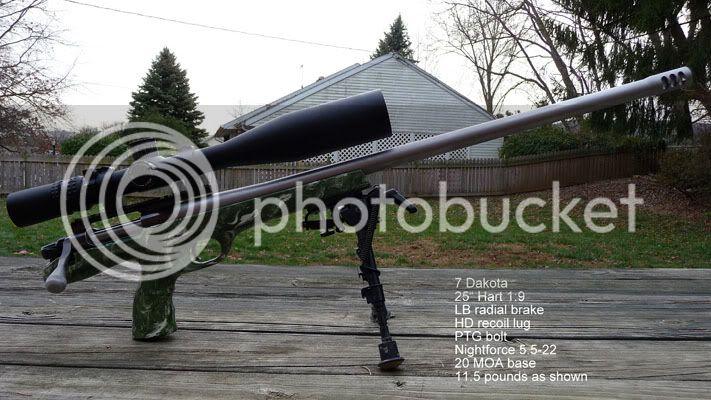 Decided to makeover the 7 Dakota with a new barrel chambered by Kevin Cram of Montour County Custom Rifles. It's a Hart barrel with a 1:9 twist, and I also had Kevin bush the firing pin while he was at it.
Hoping to break it in this weekend and do the load development.

Yep it's a long barrel, 25 inches before brake!!!! I wanted to be able to get the 180 Bergers to 2900 fps and according to Quickload I was gonna need the length to do it.
I plan on just shooting the 180's primarily and want to get the most out of them for long distance shooting. At 11.5 pounds as pictured it won't break my back carrying it either.

I might even take this one to Africa next spring as one of my three guns.

Africa? Africa! Did someone say Africa......I can hardly wait for that trip.

That is a bad rig Doug. I wish my last name was Trump.....
That 7 Dak should really move out of that long launch pad.
Z

Thats one huge pistol! Very nice Doug, those africaanals are in for a world of hurt!
G

Very sweet. All she needs is wheels. Been thinking I need to do something like that with a collapsable stock. Be very handy in the back pack.
T

congrats! let us know how it shoots.by the way that would be a great prairy dog gun.

Nice!
Yo may get more MV's than you think.
E
C

Awesome rig! Didn't know they can weigh more than the average factory rifle w/scope. Enjoy your trip to Africa and good hunting.

7 Dakota (Thunder) is ready for elk
2

After a good day at the range

The Franken-Ruger goes on a diet