Just ran a fairly rigorous temperature sensitivity test on IMR 8133 and Reloder 26 in my 7mm RM.

2) An aliquot of 5 rounds was placed in a cooler with ice (~32° F) for transport, and a second aliquot was placed in another cooler with 3 Nalgene bottles full of boiling water. Since it was a steady 29º F for the shooting session, the "Cold" aliquot was taken out of the cooler, and left outside on the ground next to my shooting position, with a thermometer in the lid of the ammo box. Both aliquots had ample time to come to a near equilibrium temperature (>2 hours), though the "Hot" rounds obviously slowly cooled during transport and setup from ~135° F initial temp, to ~100° F when fired.

3) Rounds were fired in 4 shot strings, 2 "Cold", then 2 "Hot" (to ensure maximum chamber heat for the "Hot" aliquot). The barrel was then allowed to cool to ambient temp before the next 2x"Cold" and 2x"Hot" string of 4. The last two rounds were fired 1x"Cold" and 1x"Hot", for a total of 5 shots of each temperature.

4) Both sets of loads were on the toasty side for this rifle (I was exploring top end loads for these powders), and based on the velocities, are probably at or slightly above SAAMI max. 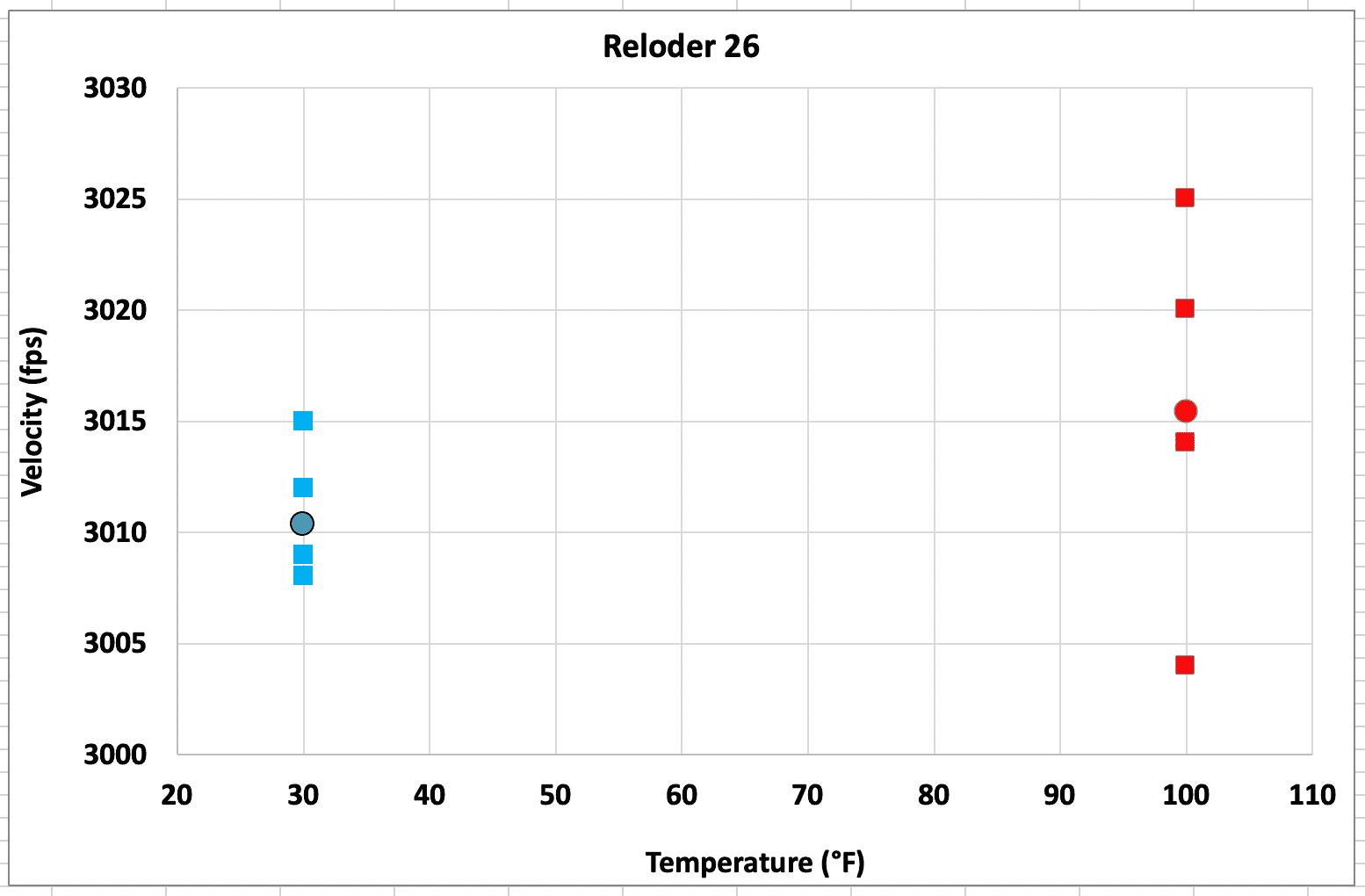 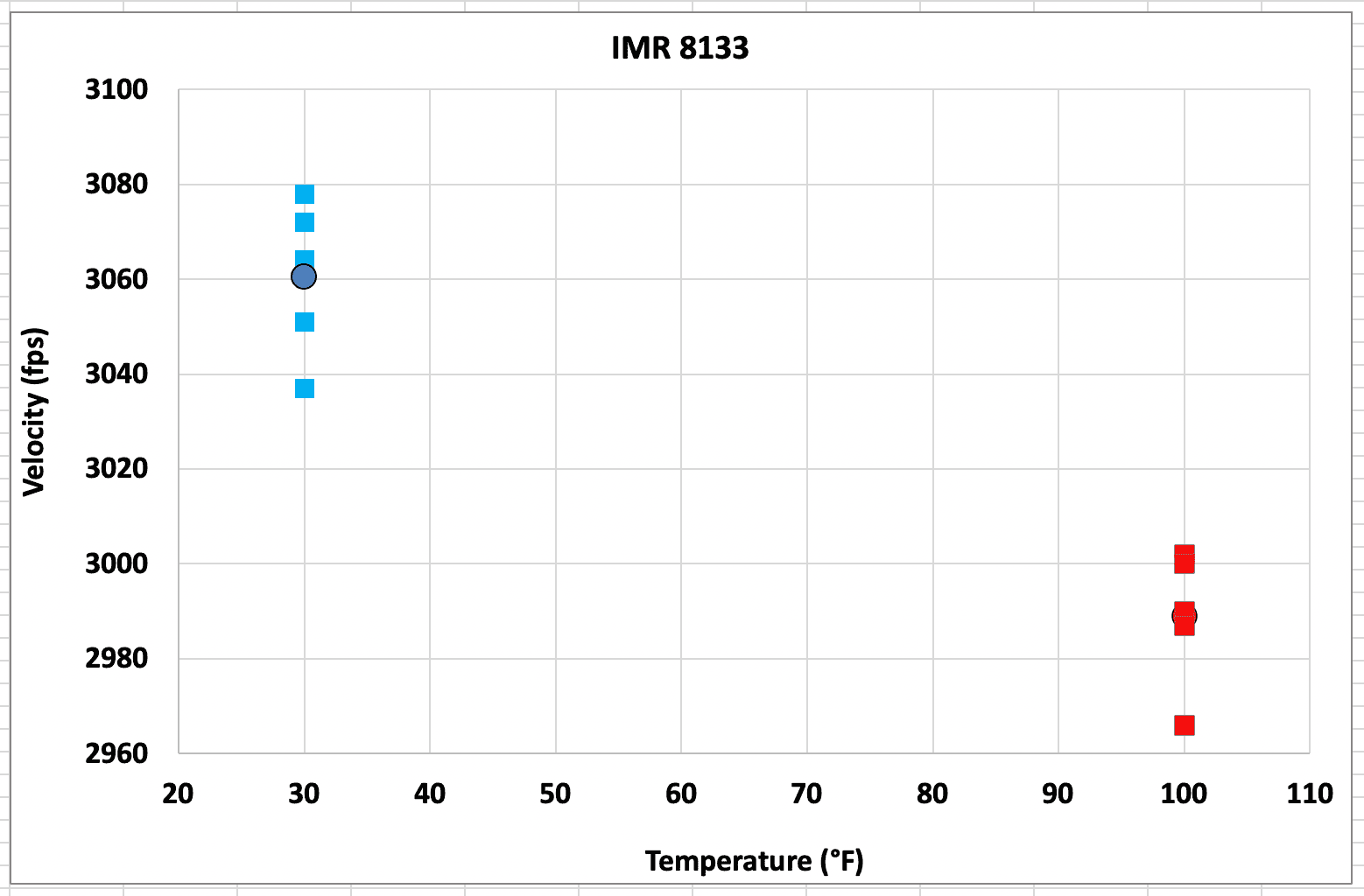 Reloder 26 performed admirably, with an ES of 21 fps and SD of 8 fps across all shots.

IMR 8133...I don't know W.T.F. is going on here, and can think of no explanation. ES/SD was rather high for each aliquot, but well outside error. I've replayed the shooting in my head over and over, and I'm 99.9% certain there's no way I reversed the shot order, as I intentionally shot the "easy to grab" cold rounds out of the box at my elbow first, then shot the ones I had to dig out from under a wool shirt and inside the cooler, 2nd. I know for a fact that the last two were 1x"Cold" then 1x"Hot", as I pulled some hot water out to give to my dogs since the experiment was finished, and those two also showed the extreme difference (Cold 3078 fps, Hot 3000 fps). As also mentioned, I loaded these in the same sitting, and they were only separated into aliquots this morning when I put them in their respective coolers.

The results for IMR8133 are so odd, that I think it requires a retest before putting much stock in the outcome. I will hopefully get a chance in a week or two when the grubby weather that's inbound has passed. I'll probably use my 264WM for that, to get another data point.
Last edited: Dec 29, 2020

Thanks for your research.
Lot of info on 8133 lately. I passed it up and purchased 7977 instead because it was (supposedly) closer to H1000 and RL26 in performance.
Alas, still stuck in a time warp with no freedom to get to my reloading bench.
P

Nice work. And a conondrum with 8133. Looking forward to the 2nd round of testing for some resolution on that powder...

I’ve never had much issue with r26 loads that I developed in the summer being much slower when shot colder. I have had pressure issues in both my 7SS and my old 6/5 saum on loads developed and shot at 35 degrees ambient getting high pressure when shot above 80 degrees
I

I've had great luck with 26 for my testing also. I dont have my notes handy as to the temps I tested at but I came up with .2fps/degree swing.
I also did some testing with 8133 with temps at 10, 35, and 70 degrees. I came up with basically the same funky results with big ES and the average of each set equating to .7fps/degree swing. I've also loaded for a friends 338 rum with 8133 and had great speed and accuracy. The next time shooting the same load the accuracy was gone and speeds all over the place. It's amazing how I've read a lot of people having bad luck with 8133 but it's supposed to just be the imr version of retumbo with copper fouling reduction.

Not surprised with the 8133 result. Tested it in my 30/378 Wby @ 90 degrees with bizarre pressures at medium Hodgdon published charge. It actually had hard bolt lift. The remainder of the pound is sitting way in the back of the cabinet. Tried it when I was low on Retumbo, I've since acquired a good supply.

MallardAddict said:
I’ve never had much issue with r26 loads that I developed in the summer being much slower when shot colder. I have had pressure issues in both my 7SS and my old 6/5 saum on loads developed and shot at 35 degrees ambient getting high pressure when shot above 80 degrees
Click to expand...

It does no good to test cold ammo in a hot gun. Only way to do it right is to shoot both gun and ammo at ambient temp.

When winter testing, I leave both gun and ammo in the unheated garage to cold soak over night.
L

At excessive pressures velocity can start to drop.
B

Exactly what I've come to expect of the new IMR powders. Fantastic temp stability and the spreads within temperature regions are nice and stable. Nothing like as erratic as some others. RL23 might be worth a look too. From the limited data I have for RL26, it looks like it goes bonkers after 90F which a lot of powders that are otherwise known for being pretty stable do too. Kinda curious to see below zero numbers. I'll bet things get lumpy down there for RL-26 too.

Dog Rocket said:
It does no good to test cold ammo in a hot gun. Only way to do it right is to shoot both gun and ammo at ambient temp.

When winter testing, I leave both gun and ammo in the unheated garage to cold soak over night.
Click to expand...

You might have missed it in the "Methods" section, but I did exactly that. Cold rounds were fired in cold gun (2 shots), then 2 shots of hot rounds immediately after. Cooled the gun to ambient temp with a blower, rinse, repeat.

longestrange said:
At excessive pressures velocity can start to drop.
Click to expand...

I thought about this. Not a bad point, and the "velocity plateau" you sometimes see near max pressure, could also explain the lack of sensitivity in the RL26 test.

So what have we learned? If you're afraid of temperature sensitivity, just run that puppy well over max PSI and you're good to go!

Location
Somewhere down in Texas