I just got a Taurus Model 63....put a really good Leupold scope on it that I know can hold group from a previous rifle it was on.

I can't get this rifle to hold a group that makes any sense. It's all over....some times it will be tight....other times in the same 10 round shoot it's on the other side of the bull.

Anyone else have good or bad luck with these Winchester clones?

Taurus and Rossi have never been known for accuracy. And there is no such thing as 'a really good' Leupold.....
3

We'll I'm glad I found our "expert" on optics and if you can communicate the experience you had with the Taurus Model 63 that would be even more helpful.
3

I changed to some ammo my son had and group tightened up considerably. Next trip I'll take 4 or 5 kinds.

It is amazing how picky some .22LR guns can be about ammo. I'm glad the rifle is showing some potential. I read that the scope mount for these guns used the rear sight in some manner which had me questioning the strength & stability of the system. But if an ammo chg brought improvement, that's a good sign it's probably fine. Keep us posted. (Also, Leupold scopes are fine. Always some haters out there...)
3

Yes I was surprised in the ammo change...I knew it could be a factor but didn't expect what I saw. My son was making one ragged hole with his 10/22 with open sights so I said...hey trade me for what you are shooting. I chose to have the receiver drilled and tapped for a weaver block mount as I had same suspicions. I think I have a solid mount....yes and a good Leupold.

Hey @348 fan
I had a Majestic Arms aluminum barrel with a steel liner on a Ruger 77/22 that was the most picky thing I've ever seen on ammo. I had about 10 different types of ammo for it (.22LR) so I took them to the range and shot groups with everything at 50 yards and that thing spit CCI Green Tag into a 6" group (shotgun pattern?) and the Wolf Match Target ammo into a 0.5" hole. The rest of the ammo was somewhere in the middle but none were anywhere close to as accurate as that Wolf ammo (I've heard it is made for them by SK, so it is high quality stuff.)

That was my 'eye-opening' moment to how picky these .22 LR guns can be on ammo. In contrast, I have a Ruger 10/22 that I put a 0.920" stainless steel Butler Creek barrel on and that thing will shoot any ammo I have into 1" or less at 50 yards. Very consistent and forgiving. You just never know. (But it LOVES that Wolf Match Target ammo, too!)

You were smart to have the receiver drilled and tapped for a Weaver block mount. Now you know the mounting system is not an issue, and your scope is a high-quality item (Leupold), so you are eliminating variables. Once you get a variety of ammo to try out, I'm looking forward to your report on what ended up shooting best. Sometimes it turns out to be the inexpensive, $25 for a 'brick' Walmart stuff (CCI Blazer or Remington Thunderbolts)! Those are happy moments.
3

Funny...exactly what I said to my son with the original ammo I was shooting....."looks like **** shot gun pattern".

I have at least 6 different brands and bullet weights/types here at the house. I'll probably pick up some more too.
3 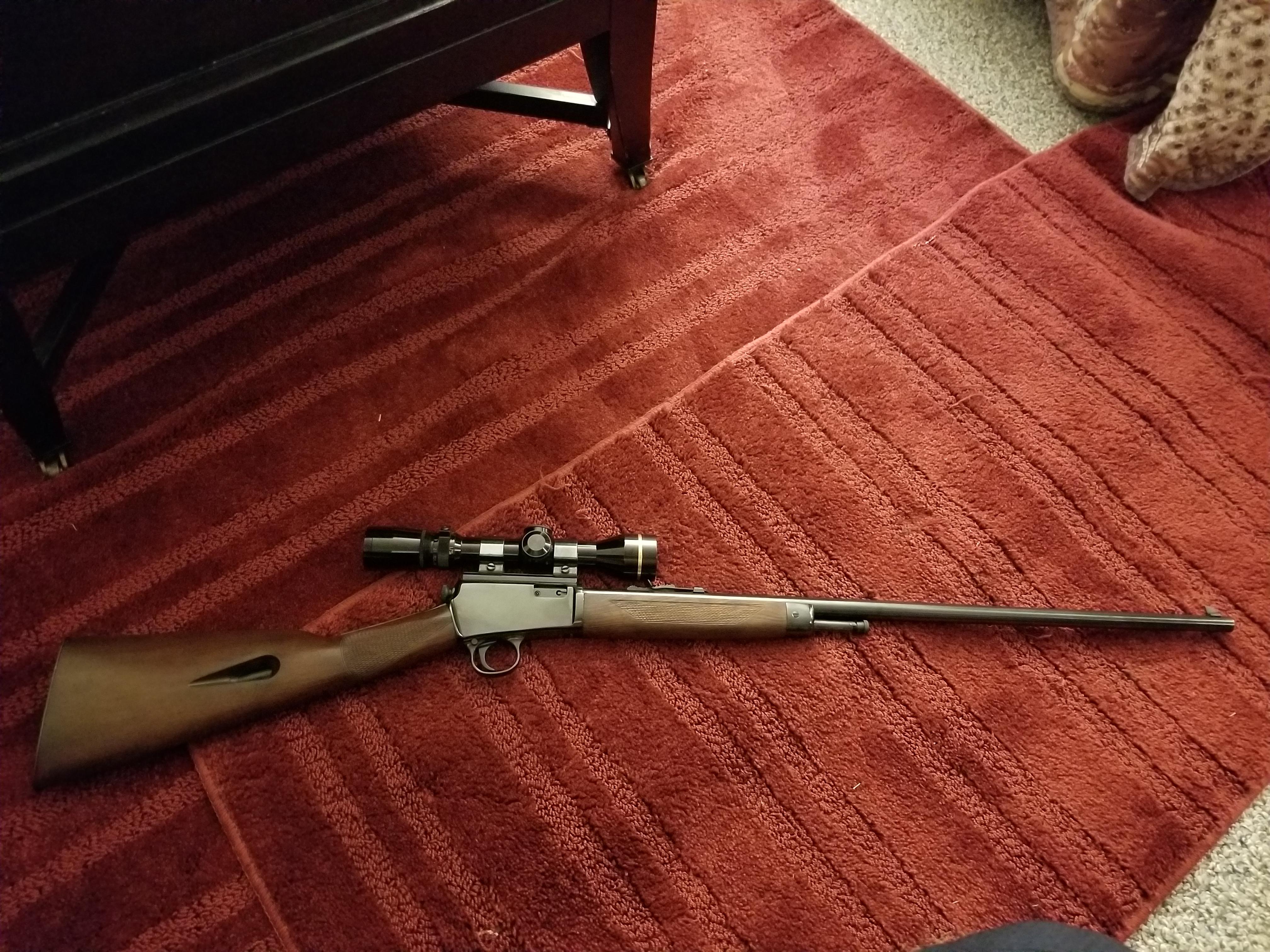 here it is with the Weaver block base...mounts and the "fair to middlin" Leupold.

That looks great! I like the classic looks of it and the way you 'charge' it to fire.
3

CCI mini mags is what it likes
3 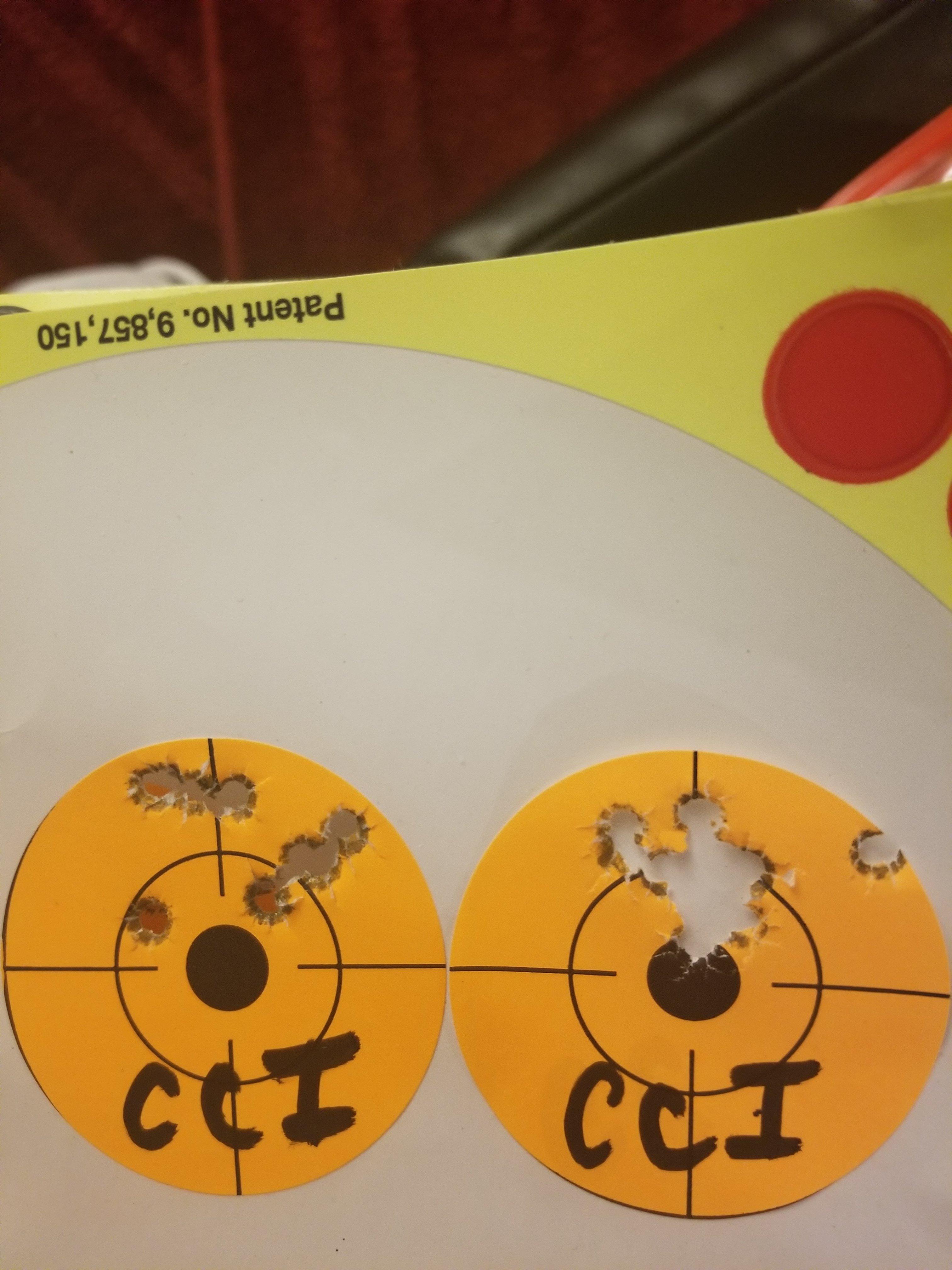