nwmnbowhunter said:
Four 270 win myself plus the family has a bunch.

Excellent shooting and impressive velocity for that little Hammer bullet!

308win said:
To answer your question....YES!!! Just put a 130gr pill in it and it's a lightning bolt on deer. In my opinion, it is the perfect deer cartridge. I've seen more bang flops with the 270 than any other rifle that I have personally shot or witnessed. Something about that .277 that just anchors them. Exit holes are dependent on the bullet used, but I haven't seen one stay inside the body cavity yet. I don't share load info, but the SST is one of my favorite bullets in it.
Click to expand...

My wife is taking everything from pronghorn to elk with a 130gn GMX out of a Ruger 77mkII, same with my friend and his Tikka T3 with 130gn Federal Fusion. My first elk was taken with a Win model 70 using a 150gn partition, which I recovered. The 270 is a family member for sure.

One thing you might be careful about is using slow burning powders as the pressure curve might be too long for a semi auto and cause issues with the gas system. Also hot handloads could damage the mechanism and give you some feeding issues. Typically those rifles like loads in the 90% max range. My buddy has a 30-06 and it won't cycle rounds from the magazine with really hot loads. Jams up every time. Back it down to 2750 fps with a 150 grain bullet and it runs fine. Accuracy is hunting adequate. 1.5" to 2" inch groups at 100 yds. Its a 400 yd rifle max. Yours may do better.
S

SamuelBerryhill308 said:
Hello all here lately with the new 6.8 western coming out and all the new .277 cal bullets out (if you can find them) I was wondering who all still uses the old standard 270 win? I have one that I'm starting load work with that was left to me by my late grandfather and I will be hopefully using it this deer season some it is a remington 7400 woodsmaster that he bought new in the 80s and it was my first hunting rifle.anyways just wondering who all still uses this caliber and what are some pet loads you may have and would 400 yards and in be good range for this I know one of my farthest kills on a deer was right at 350 with this very rifle.the only reason I quit using a 270 win was not big exit holes and no blood trail if needed with the ammo we use to use.has any one else had this problem in the 270 and if so how did you over come it that is my main worry with using a 270 again and for the past 8 years I've only used 308 or 30-06 and 35 rem.also how does the 270 stack up against the newer main stream calibers that are out today.ive have actually been looking to purchase a bolt action in 270 win or 270 wsm just to mess around with some and can you really have to many guns haha.i would like to here some good insite in this old caliber though and maybe re light the old fire I once had for the 270 win thanks and God bless
Click to expand...

The one Remington 7400 I had ( actually it was the fancy Model Four) shot several factory loads very well. I never tried to handload for it as I had a plan for it. At the time, my parents were still alive, down in Texas, and I set the rifle up with Federal 130 NBTs and left it with them so I always had a spare. I was able to travel down there alot back then and I hunted Exotics/deer when I could, took the meat to them. Not long after I left it there, my favorite Uncle asked me if I would sell it to my Aunt. Well sure...$350...on time even, ha They are both long gone now, but my cousin uses the thing still. I grew up with Mod 742 "jammomatics" and that 7400 impressed me very much; good as any bolt rifle I ever used. My old Belgium BAR only liked 130/140 handloads, but it too was a shooter. I think someone makes an aftermarket trigger ( or springs) if your rifle needs it. Good luck to you pard!

Thank you everyone for your input.like some have said on here about reloading for the older rifle that I have and it being a semi auto how close to max charge would be safe in this gun from book loads.as far as power gos that is listed in my book I have ramshot big game and w760.i have other powders that are faster burning.i know with my factory ammo that I have winchester deer season xp 130 grain this rifle shows pressure which doesnt make scents to me how factory ammo shows pressure
Last edited: Jun 9, 2021

Some factory loads really are loaded to or very close to the .270's SAAMI of 64-65K (?) Norma ammo has always seemed to me to be one of the "hot ones". Now, 50yrs ago, a friend of mine was given a brand new Mod 742 (30-06) for Christmas and new Norma ammo. I was home on leave from the Army, and he told me had had a problem. It would shoot Remington 150 corlokt factory just fine, but the Norma stuck in the case and the extractor ripped the rim off! Took a cleaning rod to knock it out. At the time, neither of us had ever seen anything like that, ha. He sent it back for another one and it worked fine. The first one had a very tight chamber, just enough to be an issue. I always used a Small Base Resizing die on Semi-autos for handloading, just to "hedge my bet" all these years. Autos are hard on brass anyhow so if you get 3-4 firings, your Gold!
S

Here are my thoughts and experiences, specific for your Remingtion Model 7400 - if you decide to reload.

1.) You cannot run traditional slow burning powders in this gas gun, such as H4831SC and RL26. The timing will be off, and it will not cycle correctly. This creates a lot of stress and wear on the gun, and also the extractor damages the case rim. At max loads, I even had some cases fail to eject. These powders seem to work only if you are near minimum /starting loads, and for that reason are better choices. The 7400 doesn’t not have an adjustable gas block option, and unless you find a qualified gunsmith that can re-port yours, I would stay away from any powders slower than H4350.
I have loads developed with H4350 (130-150 gr) and IMR-4064 (130gr) that shoot and cycle great.

2.) I have issue feeding exposed lead bullets in my 7400. This may be specific to my gun and feedthroat, but could also be an issue with 7400s in general. Even if the cartridge feeds, these tips are visibly damaged (shave off and dented) when I unchamber a live round. For that reason, I exclusively use polymer tipped bullets in this gun. Nosler Ballistic tips or Hornady SSTs.

3.) The key to the above bullets (NBT and SSTs) is to not drive them too hard, or they will separate on impact. They seem to work best in the 2400-2700 fps impact velocity range, so keep this in mind. You should easily be able to get 3100 fps MV in the 22” 7400 if you load H4350 under 130gr bullets. However at shots <100 yds, you will have too much impact velocity. For that reason, you might want to try 140 or 150gr. Given your stated 400 yd max, the higher BC might actually give you better longer range performance than a 130 and also address the close shot issues. I personally don’t shoot over 200 yards where I hunt deer, so I just shoot 130s over a medium load of H4350 - for a MV in the 2900-2950 fps range - that shoots accurately.
Side note: 140 gr NBTs are actually higher MV than 130 NBTs given the same case, powder charge, and COAL. This baffled me at first, but when I ran it in QL, the 140s are a longer bullet, taking up more case capacity ... which actually resulted in a higher pressure/MV. Go figure.

4.) 7400s can be incredibly accurate, but have some inherent issues that can effect vertical spread. a.). Vertical POI is greatly effected by the forearm screw tension. This become very apparent if this becomes loose, or is removed and reinstall after a thorough cleaning. I’ve seen as much as 10” (@100 yds) difference. b.). As the barrel heats up, this also changes the POI. I’ve seens 1-1.5” difference (upwards) from a cool to hot barrel (I.e. 4-5 shots). This is a nice feature when deer run away from you after the first missed shot, as it self compensates for elevation required to stay on target . In summary, once I figure this out and Locktited my forearm screw - mine is a solid 0.75-1 MOA gun.

5.) Keep you chamber clean and dry. If you don’t have the chamber cleaning brush that came originally with the gun, then buy one. Dirty, damaged (corroded/pitted), and oily chambers will result in extraction issues. This is the main reason why Rem 742/740/7400 have such a bad reputation and given the name (jam-o-matics). The earlier versions were are known for receiver rail wear also.

Okie Whitetail Hunter said:
Well I sent my proof blank to my gunsmith today to get chambered in 270. Can't wait to get it put on my rem 721 that was manufactured in 1948 as a 270 win. Will post aome pics when I get it back. Longest shot with the old barrel was 402 yards on a whitetail in OK.
Click to expand...

Here is a pic of my Rem 721 bugnut setup with a proof 26 in barrel. Scope will be here soon and I will then hopefully make it to the range. Standard 1:10 twist.

Okie Whitetail Hunter said:
Here is a pic of my Rem 721 bugnut setup with a proof 26 in barrel. Scope will be here soon and I will then hopefully make it to the range. Standard 1:10 twist.
Click to expand...

And this is when it all started! 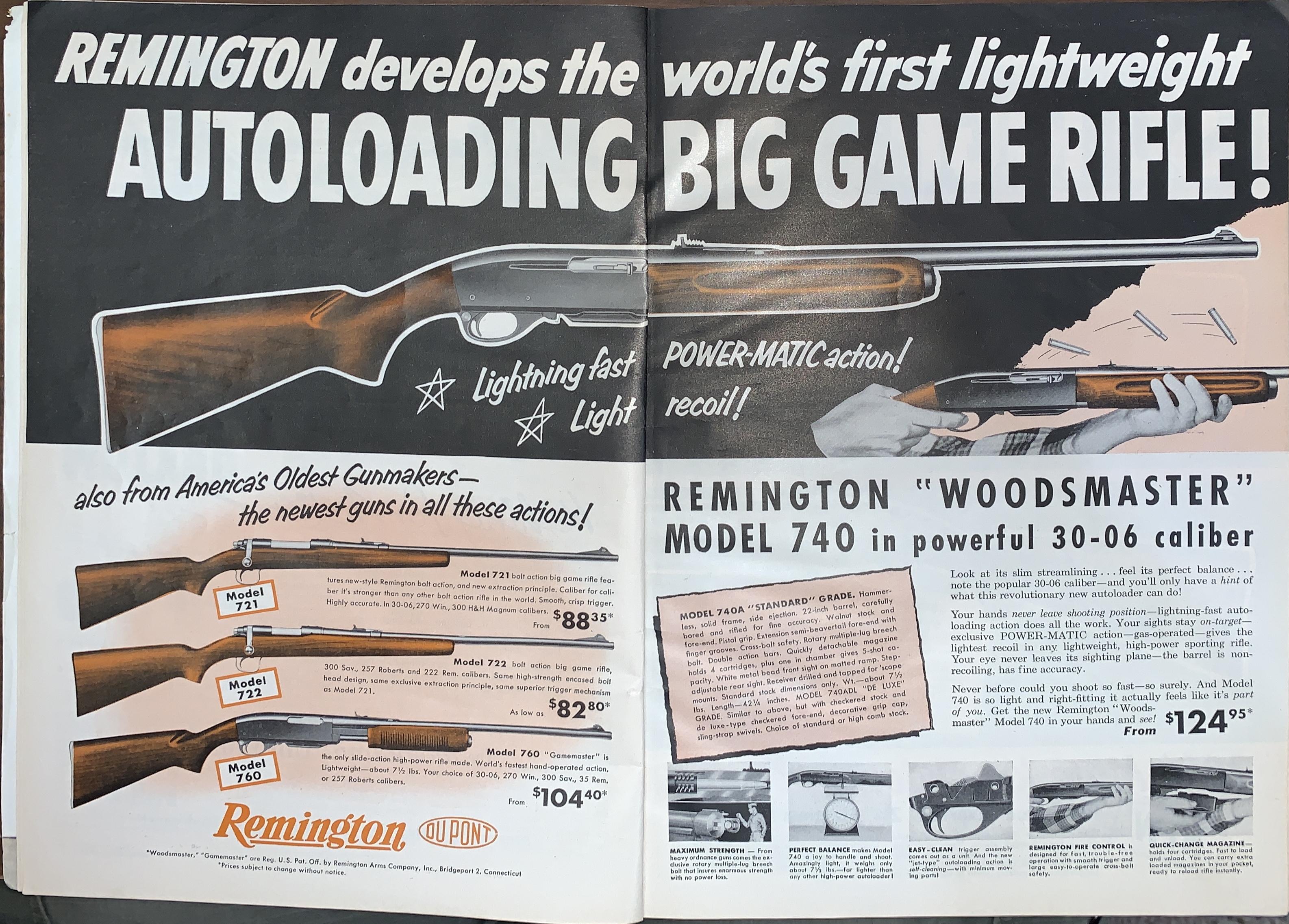 lightacres said:
I wanted to remage in 6.8 western...found out quickly that very few barrel makers are offering a fast twist .277 barrel...standard is 1-10 and only a few offer a 1-8...guess everyone will start producing fast twists if the 6.8 western catches on...time will tell...
Click to expand...

Pacnor will make you a fast twist super match barrel in 270caliber. I had them make me a 270 Weatherby Savage Prefit, 8 twist. It is awesome. Shoots 165Matrix lights out!
D

I have been shooting 140 Berger Hunting VLDs in my 270Win, very accurate and deadly. Bang flop. They do not run away so I see no need for a blood trail.
Share:
Reddit Pinterest Tumblr WhatsApp Email Share Link