Singles, a double, a triple, a quad, and FIVE... ALL on film

Forgive me if you've seen this already. My partner posted it up on a couple forums, so I'm just trying to copy/paste his words.

The guys from Carnivore TV (Chris Robinson from Night Crew and Dustin "Shed" Whitacre from Carnivore), on the Pursuit channel, 240 on Dish Network, and channel 604 on Direct TV, came out to Predator hunt Suppressed with James O'Neill (on the gun and myself (on the camera) of O'Neill Ops. Here's how it went down...

Day one was really slow, made 12 sets and got skunked till the last set of the day when we got a double. We thought we were going to look like a couple tool boxes, inviting out the guys and not getting them on dogs...BUT THEN.......
Things quickly turned around, with us "hitting for the cycle" in baseball terms... we had 3 singles, a double, a triple, and a quad by the end of day two, ALL kills were filmed from two different angles by myself and Chris in full HD.
We began discussing how day 3 could possibly be any better... but, it was... the second set brought us five kills at one set, and this was unique, with a pack of 6 dogs charging in, and Shed and James killing 5 in a matter of seconds, once again all filmed by two camera's, last two sets of the day only provided us with two singles, and more great footage, before we took the guys back to the airport.
When the killing ceased we had 19 dead in 2 days, with everything caught on film.
Some may be skeptical, but when you introduce camera's to the scenario, and acquiring the footage they managed to achieve, I will bet a lot of bucks this will be epic episode when it finally hits TV. The footage is amazing.
James was an absolute SNIPER on the custom built Rem 260, suppressed with the O2 Shadow XL Ti, Dustin "Shed" Whitacre held his own with the 22-250 and Chris Robinson from The Night Crew and myself, got some flat out AWESOME film footage.

Look for the episode to air some time during the next season of Carnivore, around June or July, depending on what episode the decide to put it in.

As always, GET YOUR CAN ON and ENJOY!!! 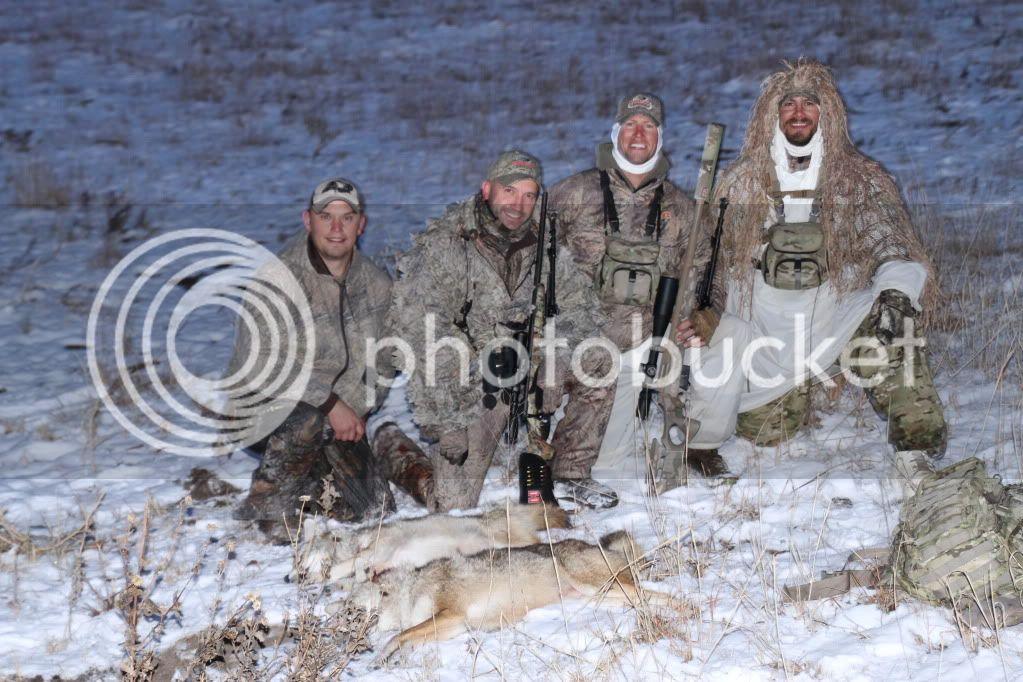 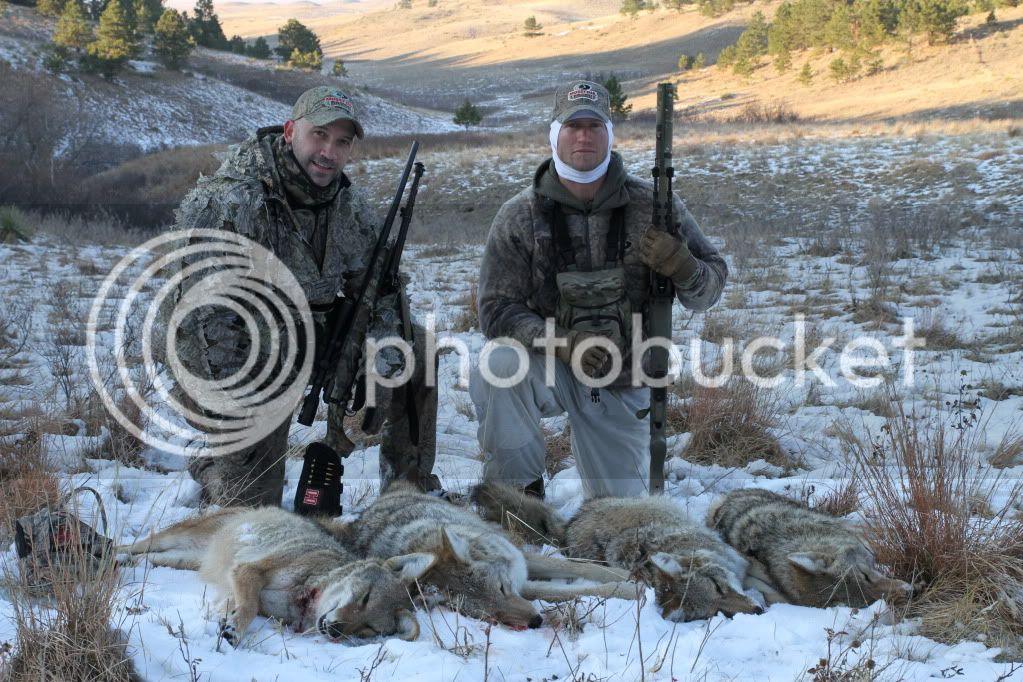 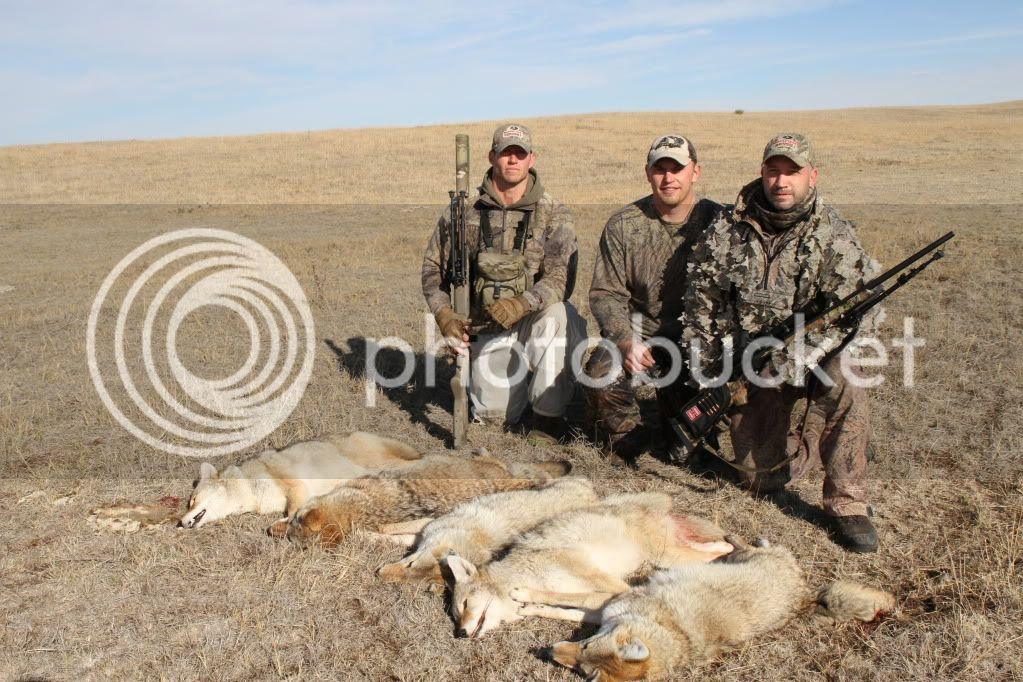 THE CREW.
the reason only 16 dogs are hangin, is because the ones with mange lay where they die. I cant think of anything more exciting or awesome than 4 let alone 5 or 6 dogs coming in and killing 4-5 of them..wow very cool!
I

great shooting! Who makes those chest packs 2 of the guys in the photos are wearing? I have a badlands that I really like but it would be nice to have an extra pocket or 2 for rangefinder, call, etc. Thanks
R

The Bino case is being offered from Oniel Ops. He is doing a group by on them on predator masters.
C

Reeper338 said:
The Bino case is being offered from O'Neill Ops. He is doing a group by on them on predator masters.
Click to expand...

Yes yes, James (goes by skinney at @TheHide or @PredatorMasters) is doing a group buy. He's the shooter with the suppressor on his rifle.
I got hozed and had to run the camera on this hunting trip. I'm in the ghillie.

James talked Jarrett Owens of Alaska Guide Creations, into finally doing a special run of his bino packs for us in Multicam. I've used a Badlands one in the past, and they aren't even in the same league.
He's got a video review that he's working on, but they have one main pouch and 4 accessory pouches. Left, Right, Front and back...and the new version offered in the group buy has an elastic "keeper" on the top to hold pens, kestrel, pda, cell phone...etc.

Mine is set up like this.
Internal pouch has my Bushnell Fusion 1600s (10x42).
Left pouch has two hand calls and Windicator powder.
Right pouch has a Gerber multitool.
Front pouch has my Kestrel 4000BT in it's own molle soft case.
Back pouch has all my hunting tags for the season, an ink pen, photo id, small skinning knife and a Sagen Saw.