I'm hoping to get some feedback on the data I collected between a few ballistic apps. I have been using my G7 BR2 (2nd gen) rangefinder and have it dialed in pretty good with my rifle. I recently received a Sig Kilo2400ABS unit that I'm trying to calibrate. The FPS data below for the G7 is confirmed data at the range. I then calculated the other data on Shooter and Berger to complete the table. The only data that I manipulated was the FPS to get the MOA corrections to be accurate out to 1000 yards. Surprisingly the data for Shooter, G7 and Berger match up pretty well. The data from the Kilo is off a little and was wanting to see if this made sense to others and get your feedback.

As an FYI I'm shooting the Berger 195 grain elite using the G7 BC of .387. Using RL33 and this is a wildcat round using .338 Lapua brass necked down with CCI magnum primers. I did back calculate the density altitude to altitude to make sure the G7 and Kilo environmental conditions were reading the same and they were which was great to see. 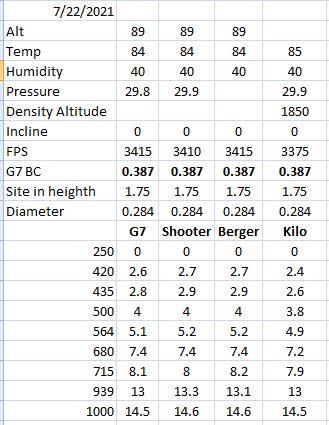 As you can see from the data the Kilo is consistently off by .2MOA up to about 700 yards. Then it matches up well with the other apps. I'm thinking it might be better to go back and recalculate the FPS on the Kilo to get the data to match up at the shorter ranges (assuming I can get them to match better) and keep in mind that anything over 700 I might be shooting .2 or so MOA off. I also have to get to the range, which is really hard to find a 1000 yard range near me, to confirm the Kilo data but since it matches my G7 that I have confirmed I figure I should be pretty close.

I have used a magnetospeed and chronographed my rounds at 3296 and the smith informed me that during load development he calculated 3295 FPS as well. However when at the range I had to crank up the FPS to get hits at the longer distances and with 3415 on the G7 I was good all the way to 975 yards.

Would love to hear feedback. Maybe I'm overthinking this and being off .2MOA is no big deal but I want to get this as accurate as I can. I would have thought the ABS would have matched up better with the other 3 apps but it's not. Thanks

Are you connecting to your abs via bluetooth? Check all your wind/environmentals’ again if you are.

Are you using the bullet library or custom curve from AB?

Another thought, is your fps data recent that youve been using on other devices or could your barrel be speeding up?

Im just throwing ideas out...
B

Thanks. I didn’t use the bullet library as the info was slightly off as what was published by Berger. So I went with the data on the Berger website.

I only have 40 rounds down the barrel so took the magnetospeed reading about 10 rounds ago. I think I just need to hit the range again.

I use the Kilo, and always use a custom drag curve and input my bullet data. You will have to true it, and I have been by correcting the moa at the target distance. Just make sure that your inputting actual drop data and at the max range you will want to shoot.
Share:
Reddit Pinterest Tumblr WhatsApp Email Share Link