I noticed my Savage MkII wasn't acting right, so I parked it until I could take a look at it.

A couple weeks ago a decided to resurrect it. It is a good-shooting rifle. A new trigger was a must, so I ordered a Rifle Basix.

I was aware of some bouncing going on when the bolt was closed. I figured I'd look into this when installing the trigger.

I washed grease away (I keep camming surfaces greased) and found this: 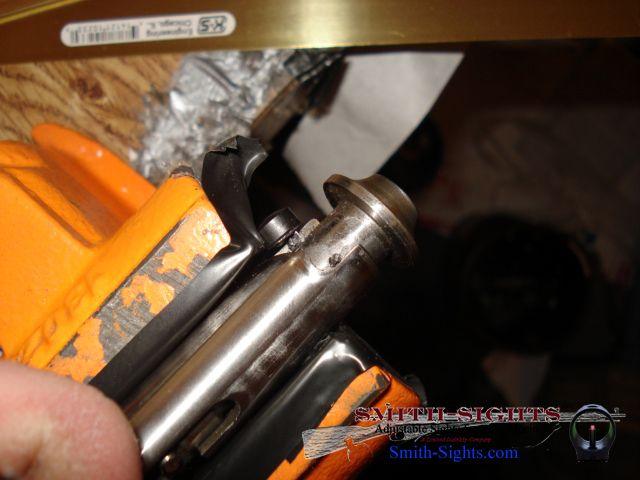 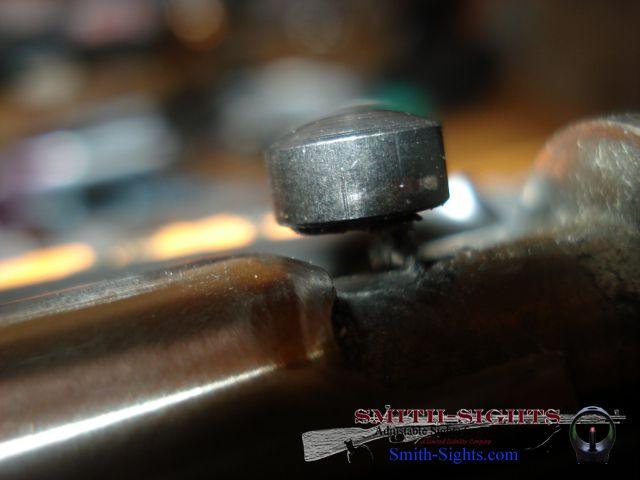 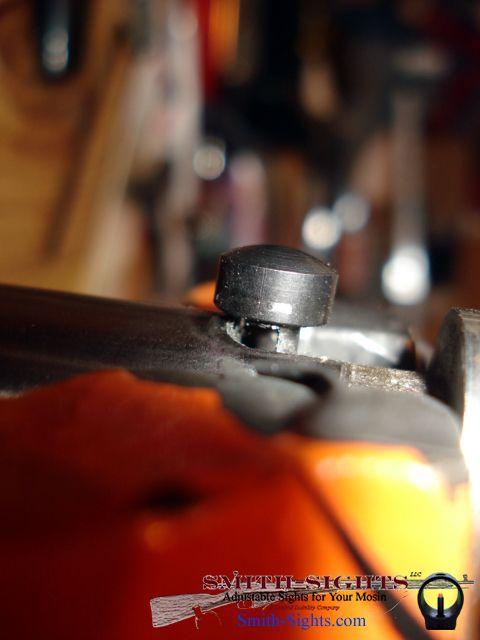 I can't believe Savage (Lakefield) would make a piece like this, this soft. This is negligent.

Going through the cocking process, the rifle being a cock-on-opening:

1. The bolt handle is lifted. At this time, the rear of the bolt cams against the guide pin, which bears considerable weight as the striker is moved back.

2. The bolt is moved rearward, extracting and ejecting the empty shell.

3. The bolt is moved forward, stripping and chambering a new round.

4. The bolt handle is lowered, allowing the firing pin pressure to transfer slowly to the sear.

The guide pin holds the striker back until it transfers it off on #4.

The sear on this particular rifle is at a negative angle. That's OK; it's designed this way so that the bolt can override the sear spring when the trigger is pulled.

However, with the guide pin worn like this, the striker is far enough forward that it will strike the sear quickly.

I'm starting to suspect I know why the Accutrigger blade was invented...

Enough of these bounces ruins the sear faces.

As well, you cannot cycle the rifle quickly and expect it to stay cocked. Even with the Accutrigger, this is a dangerous condition.

Between the time the round strips from the magazine and the time the bolt handle (which is the locking lug on this rifle as well as most .22LR bolt actions) the potential exists for the guide pin to break and send the firing pin crashing into the rim.

Remember, the tension on the guide pin is released only when the striker spring's tension is transferred to the sear, which doesn't happen until the bolt handle is in the "down" position.


A worn guide pin is hard to detect during a cursory examination for a few reasons. The fact that it's not supposed to wear is the most obvious, but the other reasons follow:


So, the symptoms point to something else, masking the true problem, and the problem is visually hidden from sight.

I'm skimping on pics today. All I had is the 3mp camera I keep at the shop, and the pics aren't the greatest.

Refer to the numbered pic below.

To disassemble, rotate the bolt to the fired position. Chuck an 8mm open end wrench (3) into a vice. Pull the front (7) and rear parts of the bolt apart against spring pressure, and lower the exposed nut (8) onto the 8mm wrench. Spin the front section of the bolt off the nut. Set it aside; the front doesn't need to come apart further for this repair.

Pad the vice and chuck the rear section of the bolt (10) into the vice. Compress the spring using your fingers or a 7mm box end wrench and pull the E-clip off the striker. Slowly release the spring so it doesn't go flying.

Pull the striker (9) back until you see the sear contact pin (6) through the witness hole. Push it out with a punch; it's not a press fit and should readily come out. 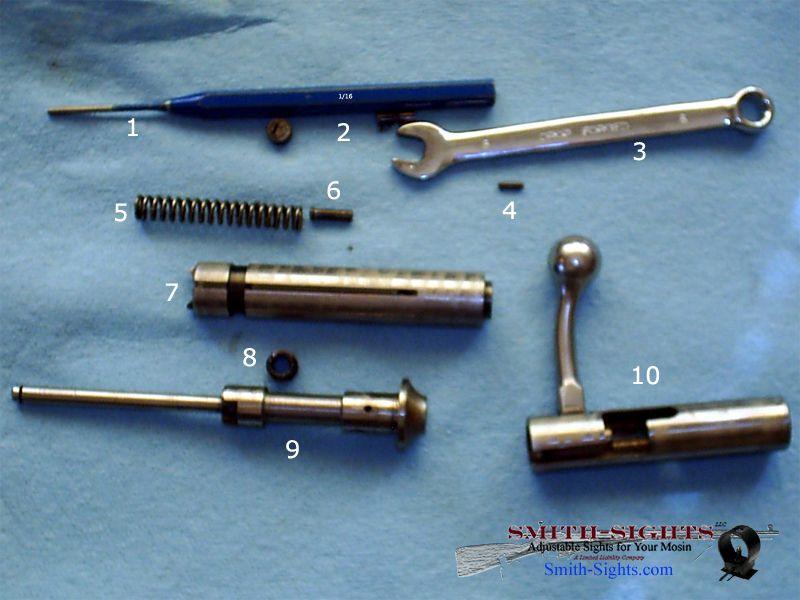 Tap the tension pin (4) out of its hole with a 1/16" punch. This will release the guide pin (2 -- shown in two parts because it broke upon disassembly!)

Upon inspection, I found the cam surfaces to have a rough and jagged edge, much like a file. I took some time with my stone set and smoothed those out. 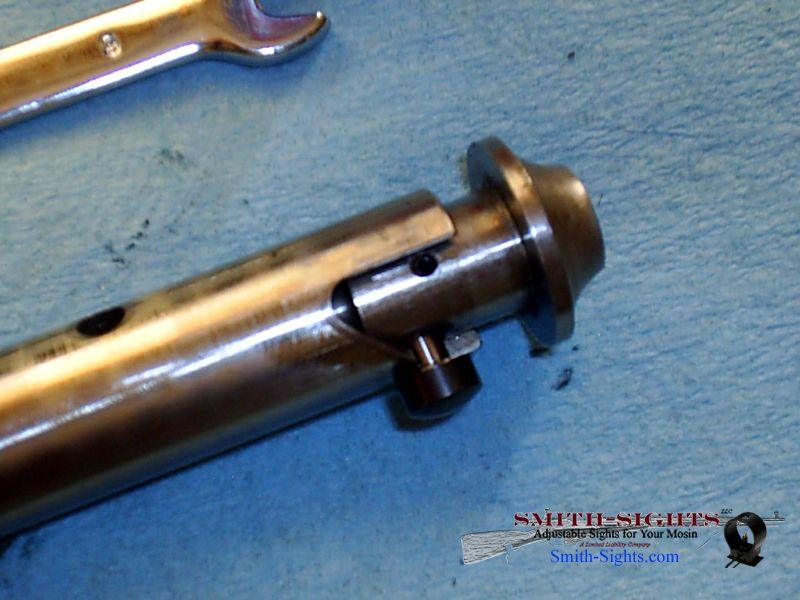 After you're satisfied with the fit and polish of parts, assemble them, checking again as you go. 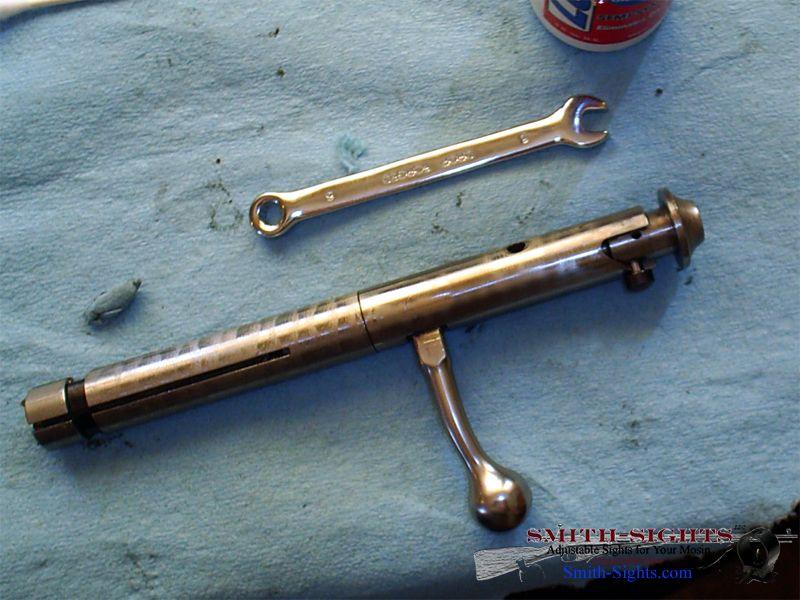 Nothing to it! It's not as irritating as some bolts, but not as easy as others. I would rate the Mosin-Nagant, Gewehr 88, and Mauser 98 bolts as a 1 in difficulty on a 1-10 scale. This would rate about a 3 in my opinion, due to the need for tools.

Hope this helps someone.