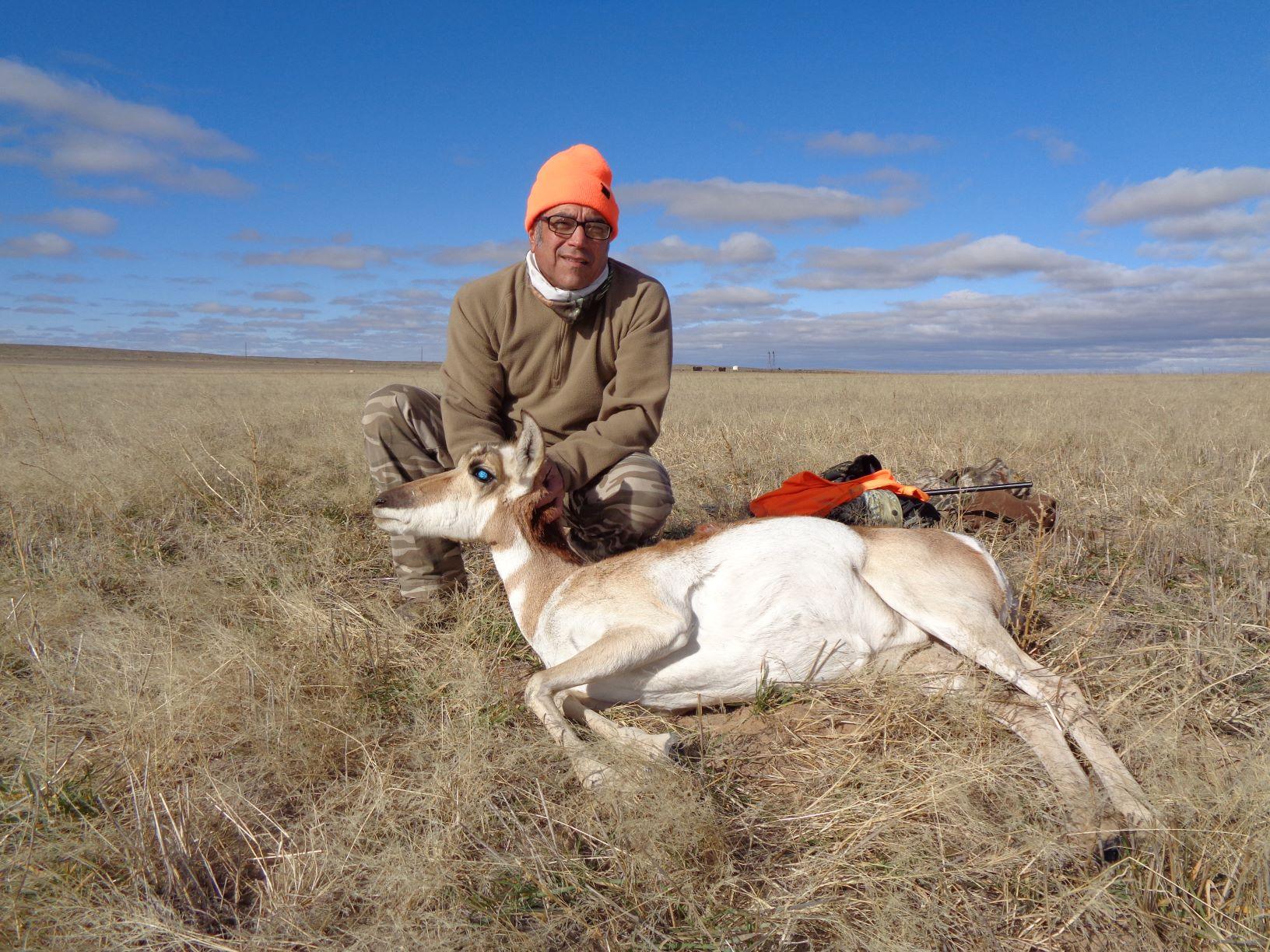 I was blessed to have my first 2 goat season on the eastern plains of CO.
We had some very close to camp but as they usually do, they ran. I rolled mine at 425 yards with a Tikka T3 in 270WSM, using a 130gn Hornady GMX, 61.0gn IMR4350, CCI250 primer, Federal brass.
I love the dynamic nature of pronghorn hunting. Things unfold so quickly and with a smaller critter, really forces your shooting to a higher or lower level, depending on your preparation. Cheers
T

If you are saying you're shooting at running antelope over 400 yards away and think that's great, then IMHO shame on you! That's not skill. It's just plain luck and please don't try to claim you're a great marksman doing that kind of garbage. No wonder no members have come on here to pat you on the back!
D

Topgun 30-06 said:
If you are saying you're shooting at running antelope over 400 yards away and think that's great, then IMHO shame on you! That's not skill. It's just plain luck and please don't try to claim you're a great marksman doing that kind of garbage. No wonder no members have come on here to pat you on the back!
Click to expand...

I respect your humble opinion but I'd ask, just how long have you been hunting pronghorn? I've been doing it for 30+ years and have seen all kinds of shot scenarios. I feel fortunate that I don't need the approval of anyone at any website to validate what I do, so you can enjoy the pats on the back. By the way, you seemed to discount the two likes I got. Maybe your opinion isn't so humble.
T

I seriously doubt any respect was thrown my way after reading your response that was as bad as your first post! You also obviously don't respect the animals you're hunting with that response/attitude when you come on a website like this and brag about "rolling" a pronghorn while it's running at over 400 yards like that took skill of any sort, when everyone knows that was pure luck! It's absolutely ridiculous to even think that was skill when you have to lead an animal so many feet running like that that you probably wouldn't even see the animal you're shooting at in your rifle scope! FYI I'm 71, took one of the first NRA sponsored Hunter Ed courses ever offered back in the early 50s, started hunting small game when I was 5 and big game in numerous states as soon as I reached the age where it was legal. Therefore, I have more than enough years under my belt to state what I feel was a lousy post on your part! I'll not retract a thing I stated, regardless of how many "likes" you get! It was absolutely poor sportsmanship (we can't use the "e" word on this site or I sure would have!) on your part to do what you did and even worse to post it on a website "patting" yourself on the back for doing something that is pretty stupid, which is exactly what it was.

PS: The two antelope I took in Wyoming during two months out there this year with my .243 Sako and 25-06 Ruger using handloads were both standing still broadside at less than 150 yards and I guarantee I didn't have to lead either of them an inch!
Last edited: Dec 5, 2018
D

I don't see my post as a brag at all and I still feel blessed. I'd understand if I saw you attacking all those taking 1200+ yard shots, some of which are blowing the jaws off antelope, even with the best training, as we all know. You are not. I train hard at my shooting and don't care that you know nothing of that.
I'll leave you with your self proclamation and leave it to the moderators if your post is a personal attack.
T

If you don't see your first post as a "brag", then why did you state the distance, that it was a running shot, and that you "rolled" it because that certainly sounds to me like the post was made to pat yourself on the back? Those things when coupled together with your final statement in that post certainly, at least in my book, appear to be bragging about a shot that most everyone on any site, including this one, would say shouldn't have been taken. I also will not argue with you about those who also do things they shouldn't whether it's long range shooting with little to no practice or anything else that anyone with some common sense wouldn't attempt because I agree with your comment. As far as your "personal attack" suggestion/comment in the last sentence of your last post I would say that if any moderator that reads what I've written disagrees and says that we shouldn't comment on situations that are brought up on this site that some feel is not correct I would be surprised. In conclusion, my comments were not made as a personal attack, but rather just comments that I and obviously others that have "liked" my posts feel were appropriate to the situation you described in your first post that created this thread.
Last edited: Dec 6, 2018
N

How does one prepare for running shots on game animals at 425 yds, I'm curious of your practice methods, as I know they can go from 0-50 mph in a very short distance? The standing broadside is a given, but any game animal on the move with the speed of antelope, please help me understand ...
D

Great question. I lead more than not and I know the drop of my rifle as well as anyone that needs to make scope adjustments for distance. There is zero time for that. Secondly, there I the very tough exercise of determining range with your eye. The ranchers where we hunt, were masters at both and if anyone scoffs at shooting running antelope, they'd marvel at these guys. Your question though, still shows that some folks here don't question the prep for 1000+ yard shots, where, as we all know, any deflection, even from the most skilled shooter, leads to shot deviations which can easily rival the challenge of hitting a running target. If anyone thinks either are luck, then maybe it is just luck for themselves. I like how you raised the question. It does not minimize the preparation I put into my shooting.

BTW, I wrote "rolled" in my original post, because when you hit an running animal with a kill shot, it rolls. Hardly bragging. That GMX bullet did the job well.
T

That "non answer" to his question was exactly that because there is no way in haydes that you could practice what you did. Shooting at a running animal of any sort at 400+ yards unless it has already been wounded is pure bull because there is no way you can tell us you have or are prepared for something like that. You don't have a precise distance to know the elevation or the speed of the animal to make a precise killing shot unlike the preparation it takes to shoot at distances at a standing animal like you're mentioning. This website is about shooting standing animals at long distances after many hours of practice along with knowing how to dope the wind, getting exact distances, the drop of a particular bullet used in a particular rifle that has all been meticulously calculated. Even then mistakes can and will be made. However, please don't even try to compare that with a wish and a prayer at a running antelope at 400+ yards like you did and call it skill. The latter is just plain foolish with absolutely no skills or practice of any type that could make it more than a wish and a prayer! I hope you've also noticed that my posts are still up regarding this and there has been no moderation intervention! I also see you have been on this site for just three weeks, so maybe you should sit back for a while and learn what the site is all about because it's sure not about plinking away at running animals at 400+ yards and calling that a skill!
Last edited: Dec 7, 2018
M

I agree with Topgun, all the preparation in the world does not make up what can happen during that amount of TOF (.45-.50 seconds with that caliber at 425 yds). 1 mph change in running speed after the shot means at minimum 7-10 inches of correction and you can't correct it after you let go. Same thing for standing head or neck shots at distance.
Shooting at running "hit" or wounded game is always an exception.
Remember that you can't call a shot back after you pull the trigger.

I'm out in Wyoming every year for two months and trust me an antelope can probably walk 5 mph and 10 mph is not even close to what they can do when spooked. Try 40 to 50 mph for short bursts and at least half that speed for a long time. The OP has mentioned that there isn't enough time to figure out things once they start running, which essentially is saying just what I responded when I stated doing what he did is not respecting the animal and the shot is just a wish and a prayer when the animal has to be led by many feet and that's not even taking the wind into consideration.
M

Shooting at running antelope is the pinnacle of stupidity in the hunting world. mtmuley
T

mtmuley said:
Shooting at running antelope is the pinnacle of stupidity in the hunting world. mtmuley
Click to expand...