Ok, weather and time worked out for me to at least get the scope dialed in yesterday at 25 yards (it was 34 degrees yesterday). This was not a test to see what ammo the gun liked the best or anything of the sort. It was just to get it on paper, and do a bone stock benchmark test.
I took the gun out of the box, put a set of Weaver bases on it, mounted a BSA Sweet 22 6-18 scope in a set of Leupold Rifleman rings, and changed the comb out to the higher one that comes with it.I know the scope it not high end but I had it laying loose and it has proved accurate in the past so, that is what the rifle is wearing. I did not adjust the trigger or do any work to the gun at all except what I listed above. I did check the trigger and it was pulling 4.5 lbs. This was going to be a bone stock test just to see how it would do straight out of the box and get it on paper.
First round went about 6 inches low and 2 inches to the right. I made a scope adjustment up and that is when I noticed that I could not chamber the second round. The lower 1/4 of the bullet was digging into the very sharp edge of the chamber and stopping the round from chambering. I guess I should note at this point the ammo was Aguila Super Extra. I backed off the bolt pressure and pushed up on the mag and I could see that whole mag went into the rifle a little deeper. I tried to chamber the round again and everything worked as it should. I wrote this off to me not getting the mag seated as well as I should have. 3 shot and I was center dot and I finished up the mag on that dot.
I moved to a new 3/4 inch dot and put 5 rounds in the mag to now see what kind of a group I could get. I once again ran into the chambering issue 2 times with this 5 round session. I could take my finger and push up on the mag and everything was fine. I was able to get somewhere around 3/8 of an inch group out of this 5 shots.
I next switched to Aguila Interceptor ammo and dumped 10 rounds thru the rifle to let it settle in on this type ammo (something an old benchrest 22 guy told me to do). During this 10 rounds the mag dropped down again at least 1 if not 2 times.
I now shot another 5 shots to see what this ammo would do. It turned in a little bit bigger closer to 1/2 inch group. I had another feeding issue with this 5 shots as well.
I will say that both ammo's seemed to indicate that the rifle may need bedding or the barrel channel cleared. I say that do to the groups mostly being vertical. The Interceptor ammo shot 3 shots into one little wad and then 2 shots into a separate group with every other shot going back and forth between the two groups.
If I can figure out how to post up a picture on here, I will post the target up.
By no means is the a great test but just the start. I am not sure what to make of the feeding issues as I have never had anything like that happen on any of my other guns that take Ruger mags. I only used the one mag that came with the gun so it could be the mag itself or something with the way it locks up not holding it tight enough.
C 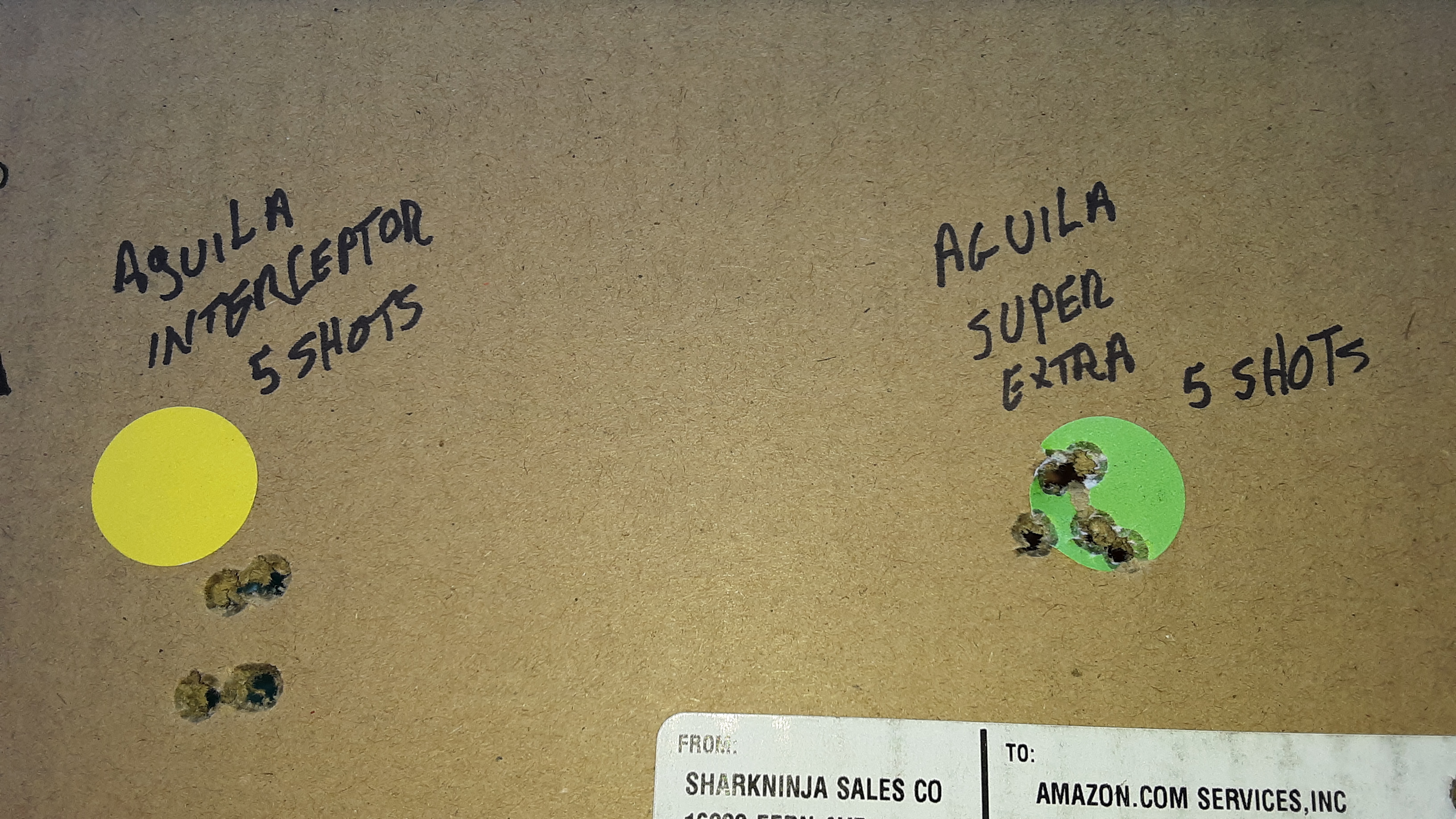