If you intend on shooting your .22lr or other rimfires past 100 yards and reducing or eliminating excessive "holdover" as your scope may run out of vertical adjustment, a sloped or MOA base is a must have. This is comparison of the Rimfire Technologies 25 moa base and the EGW 20 moa base, and some of my objective opinions of both.
A few years back when I started to really get into rimfire shooting, I did the usual 50 yard shooting, then when that got less than challenging, moved out to 100 yards. All though 100 yards still offers a challenge with the 22lr, I started to try 200 yards, and found that most of the scope I have run out of adjustment at the 150 yard mark or even less due to the dramatic drop of the cartridge at that distance. A great amount of holdover was needed to reach 200 yards, but I knew there had to be a better way.
As I got more into rimfire shooting and taking it more to a serious level, and by surfing the fine forums such as this one, the answer seemed clear as a bell - a MOA sloped base is neccessary to accomplish the job.
Enter the Rimfire Technologies and EGW bases for rimfires. Both get the job done, adding the needed adjustment to the elevation of the scope by "tilting or sloping" the front of the optic downward, which in turn gives you more "clicks" of upward adjustment. Both bases are well made, and both are similarly priced, and are of the same length. That's about where the similarities end. I started with the EGW 20 MOA base, pictured on the bottom of this side by side photo. 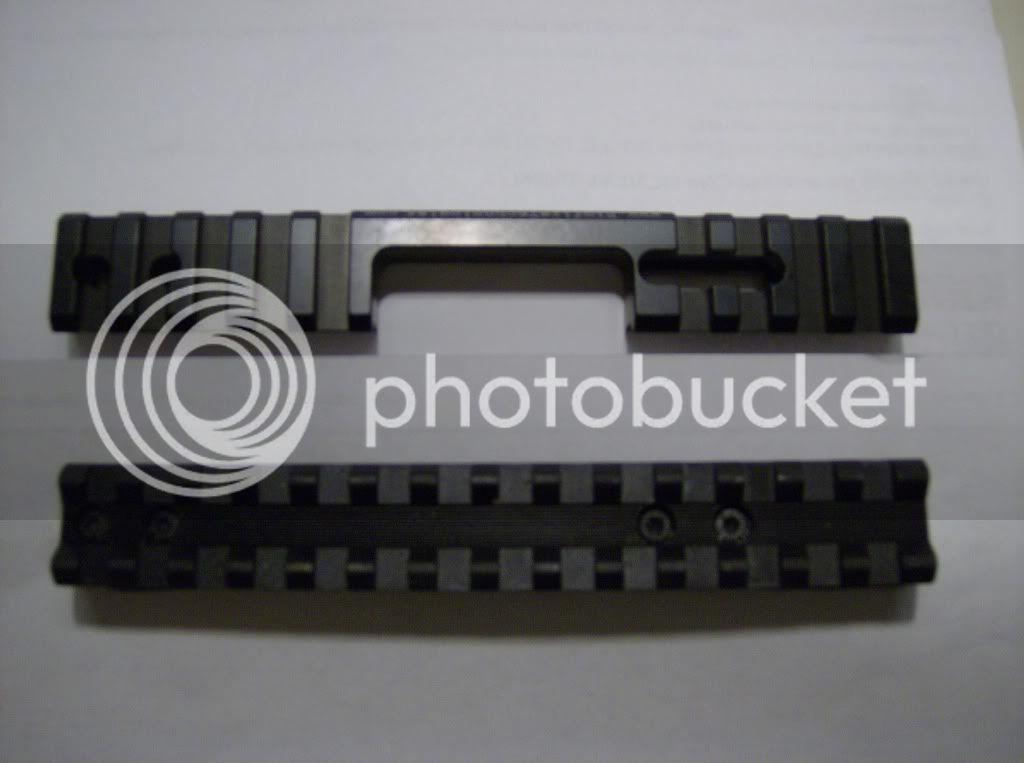 At the time, I believe it was the only one available, I was pleased with it, it did it's job, and was around $40.00. Enter today's market, the Rimfire Technologies 25 MOA base, pictured above at the top of the photo. The differences are night and day.
First a little background. The EGW base didn't fit my Savage's holes in the receiver. I contacted EGW, they had told me that Savage had a batch of mis-drilled receiver holes, to send the base back, and they would send me either a blank base that I can have drilled to match the mis-drilled holes, or wait until they were finished making new bases for the "bad" receivers. As I wanted everything to be right with this rifle I decided to wait. I waited for almost 2 monthes, called about the status. As their bases were selling like hotcakes, they were having a tough time keeping up with demand. Understandable, I figured, so I ordered the blank (undrilled) base. Now I have a closer to $60.00 base after shipping costs back and forth, and gunsmithing costs to drill it just right. Not EGW's fault, I could have waited until they made the new ones, and their customer service was better than average, so I want to point out that I'm not knocking them.
My next MKII model F (featured in the
LOW BUDGET .22 TRAINER - start to "finish" thread), wasn't intended for 200 yard shooting as I had my other Savage covering that. But then I thought "why not"? So i went with the Rimfire Technologies (RT) base.
When I received it I fell in love with it! It had a very "tacticool" look to it, and had many great features engineered into it that, in my opinion, made it the "go to base". Not that the EGW base was bad, just that the RT one had more things "right" about it.
One clear advantage was the cutout in the middle for the ejection port. It allows you to access the chamber much better to clear stuck shells, misfeeds, etc., and makes cleaning easier. The Savage name on the base is a nice touch, along with the overall beefiness of the picatinny slots and overall finish. 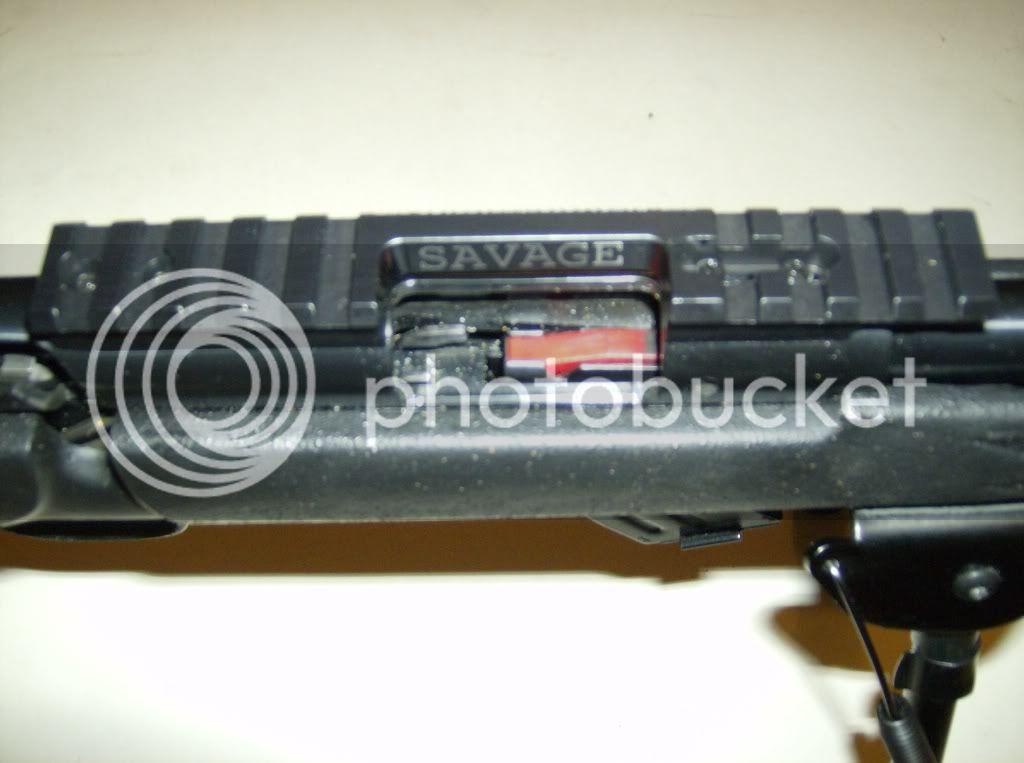 The EGW, not so much. No real quick access to the chamber, much thinner spaced, partial slots that reminded me more of a saw blade, yet it had a certain plain elegance about it, and a path of lines running down the center. 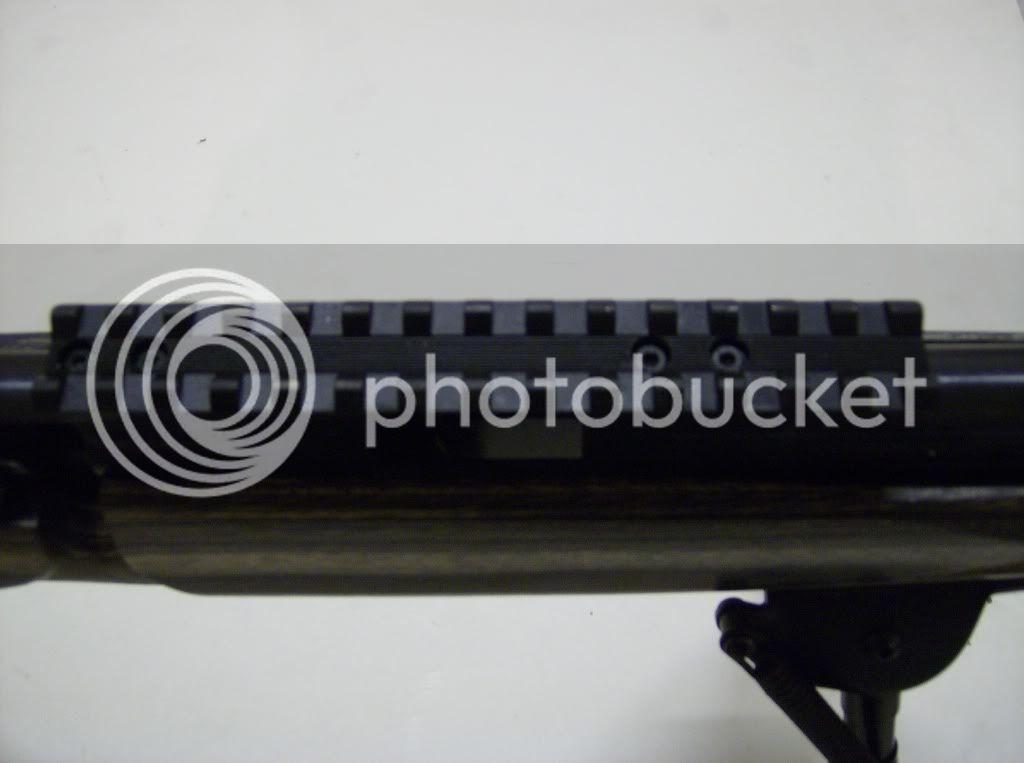 The intent was to remove the EGW base from the MKII BV do do a better pictorial, however one of the allen screws used to mount it stripped, and I now have a "permanantly mounted" base. The RT base comes with carefully oiled and packaged Torx type screws, a definite improvement over the allen ones. If you don't have one of these Torx bits, RT offers them for under $1.50.
Another built in feature of the RT base is the predominant slot located in the middle front of the base. This is to eliminate the mis-drilled receiver hole problem I endured earlier, and to fit the MKIIs and model 93s. The bolt side rear bottom of the base has an angle cut into it to allow the bolt handle to clear no matter what model you have. Pretty slick and headache free. 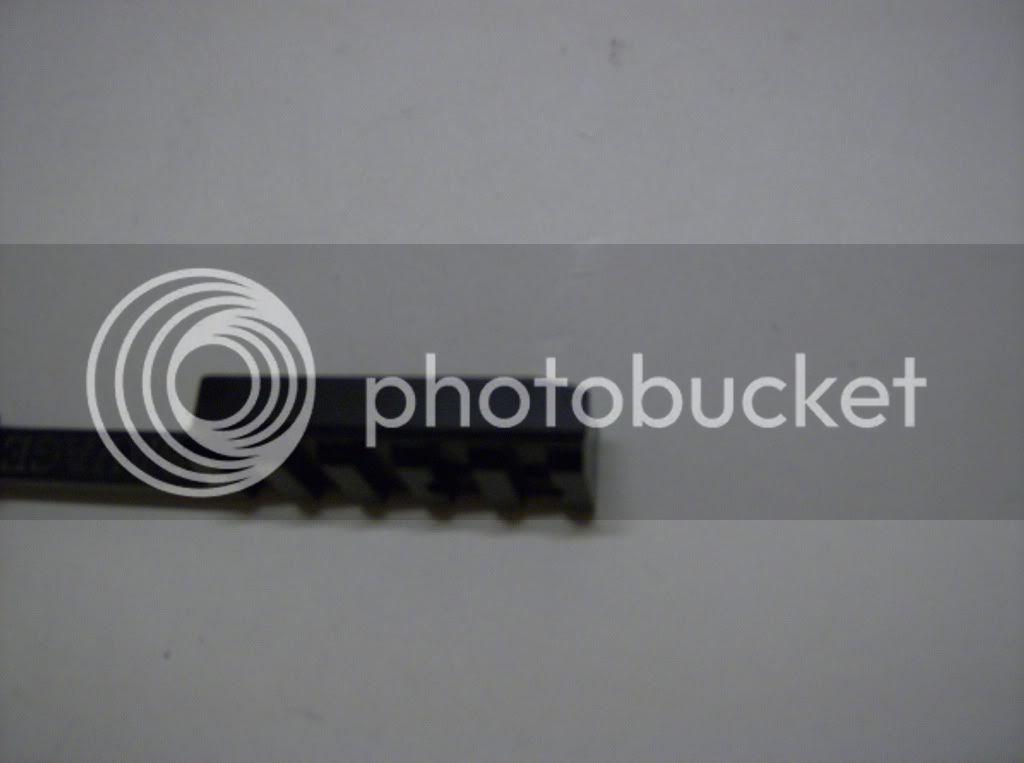 With either of the bases, the height of the base itself makes you go to a lower height ring than the one you are presently using, that is, if you want to get the optic closer to the bore and help with eye relief. I went from medium to low height to achieve the advantages of both, and still had some clearance left between the 40mm objective and barrel. I was concerned at first that I couldn't with the RT 25 MOA's greater slope, but it posed no problem. Plus added an extra 5 MOA, which should enhance ANY scopes adjustability.
The other thing I noticed is that the cutout is also longer horizontally compared to the EGW, for 22lr, .22 mag, and 17hmr applications. One base that fits all of them, and the MKII / 93 combined. Nice touch, and I also noticed that all the edges around the cutout are nice and smooth, another difference from the EGW base. The EGW has at least one more practical slot to mount a set of rings to it, with additional ones running across the top of the ejection port, that probably would never get used without more interference to chamber access. 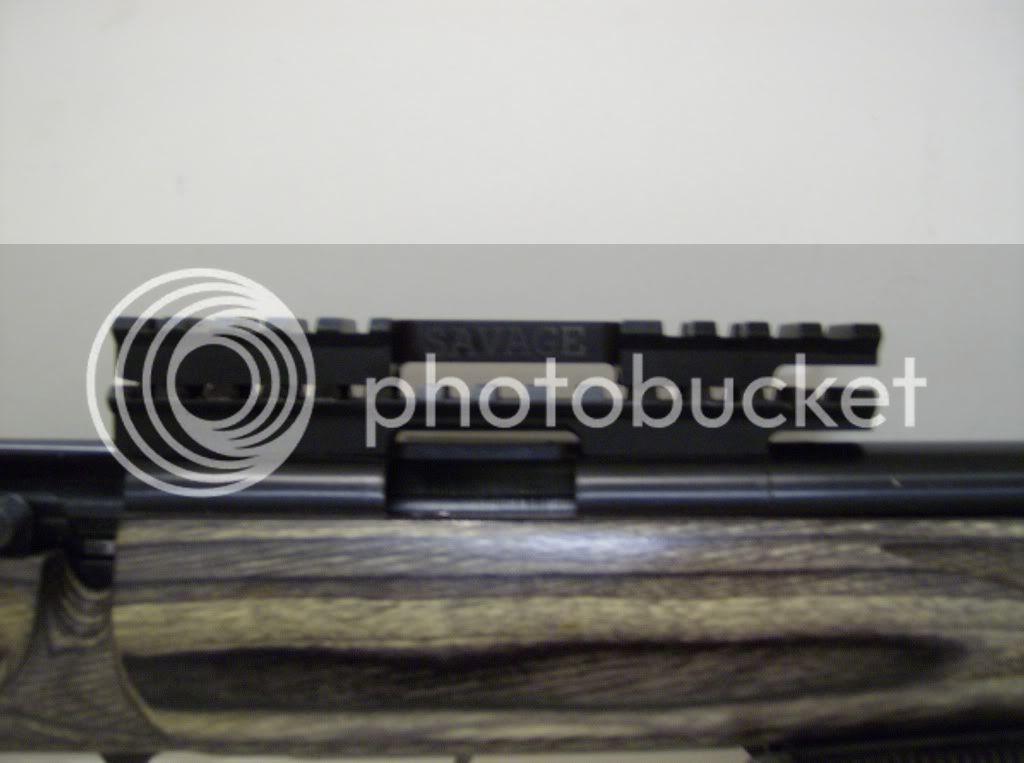 There was only 1 really odd thing about the RT base, and that is that it had some sort of groove on the bottom. I wasn't completely rounded, and looses contact with the receiver at this point. As we are talking low or hardly near no recoil with the rimfires, I didn't see this as a hinderence as it may be with a centerfire, just odd. 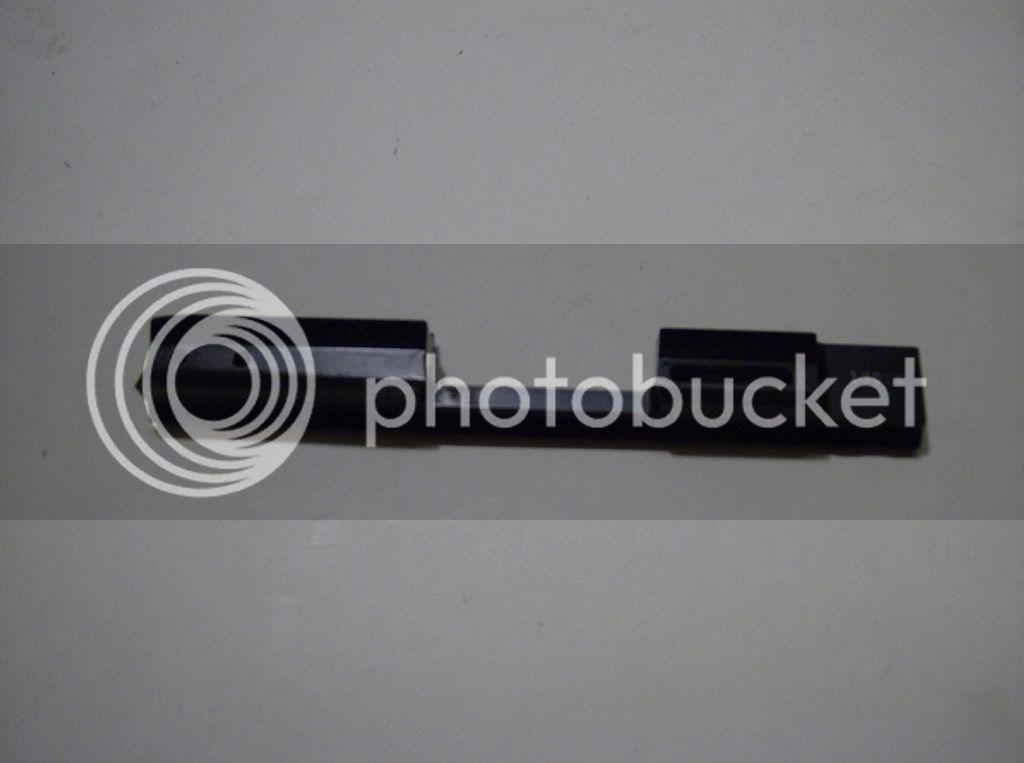 I also thought the slot in the front middle of the base may collect gunk in it from a long day in the field, but that's just me nitpicking, trying to find a fault with this base, of which I could not find of any reasonable circumstance.
When considering the pros and cons of both at around the same price, I would have to go with the Rimfire Technologies 25 MOA base as it has so many more nice features and I feel has a better "look" about it. Once again both the EGW and RT bases work fine, just that the Rimfire Technologies has more "right" with it and I do prefer it to the EGW for all the added features.

So thanks Rimfire Technologies for putting out a high end, well engineered and adaptable, capable and "tacticool" looking base that takes rimfire shooting to a higher level and at an affordable price. Not only for us savage buffs, but Marlin, CZ, Anchutz, Ruger, and Sako fans alike. There is a choice out there, and at least for me, that choice is apparant. The Rimfire Technologies 25 MOA base. http://www.rimfiretechnologies.com/
C

I've got a RT base on my Annie and it is a piece of quality work.

Good read. Lots of detail, info and pics. Thanks for posting.
B

When RT offered a LH rail for the 452 I bought one because it was the only one in town.

I had several Weaver rings and wanted to put them on other scopes and adjust them to the rail. Well they wouldn't fit. I contacted the RT people 4x by email and they finally believed me after trying their own Weaver rings. Their precision work wasn't as good as they thought. It was advertised to fit Weaver rings and rightly so, but they didn't know that either and changed the ad to read for Picatinny only. Well, anyhow after all the hassles and lack of cooperation, (more emails)I decided not to take a chance on sending it back and got some Burris ZEE rings for my 30mm tube. So unless I want to invest in Leupold or Burris rings, I'm stuck with one scope.

The screws can also dig into the receiver.

I have seen reports that some work with Weavers and some don't. This was my experience with the RT company at that time. Was it worth the cost? Not in my opinion.

EGW wants $90 for the RH 452 base which suprised me, since the others were $40. I sent a question asking what the practical accuracy improvement would be on the $50 difference, so it will be interesting to hear back.
C

Unforetunate, but, at least they fessed up which to me says alot although I understand probably not much of a consolation to you.
M

I am wondering what the slot spacing on them is? i know the EGW spacin g is standard at 10mm as per picatinny specs is the RT the same it looks like a well made piece of kit i dont usualy like slotted holes to make rails multifit but with a 22 that is not a real issue if it was a 308 then there would be an issue. I think the RT looks a lot nicer and with the cutout it is probably needed on a small action like a 220.


Thanks
_____________________
Military gifts specialists offer a select range of custom designed Airforce Rings for all branches of the armed services.
B

The RT base was supposed to be the universal Picatinny measurments but obviously weren't.

I still haven't gotten an answer back fro EGW either.


Mike Taylor said:
I am wondering what the slot spacing on them is? i know the EGW spacin g is standard at 10mm as per picatinny specs is the RT the same it looks like a well made piece of kit i dont usualy like slotted holes to make rails multifit but with a 22 that is not a real issue if it was a 308 then there would be an issue. I think the RT looks a lot nicer and with the cutout it is probably needed on a small action like a 220.


Thanks
_____________________
Military gifts specialists offer a select range of custom designed Airforce Rings for all branches of the armed services.
Click to expand...

top predator said:
If you intend on shooting your .22lr or other rimfires past 100 yards and reducing or eliminating excessive "holdover" as your scope may run out of vertical adjustment, a sloped or MOA base is a must have. This is comparison of the Rimfire Technologies 25 moa base and the EGW 20 moa base, and some of my objective opinions of both.
Click to expand...

This may be a silly question but if you have a 20 or 25 MOA base does the setup still work fine for close-range shooting?
T

it depends on a few factors such as the amount of travel you have in the optic, the height of the rings, etc.