We had a bit of spring snow last Friday so Rob and I headed out on Sunday hoping to catch some deer out in the sun first thing in the morning. The plan worked and I managed to spot a red hind at 744 yds. I couldn't find a good rest there as the surrounding scrub was too high.
We moved in closer and I was able to set up at 594 yards. Got out the palm and plugged in the data 924 mb, 6oC, 594 yards. It said to come up 9.59 MOA.
Dialled that in and then waited for the hind to come out from behind the trees. 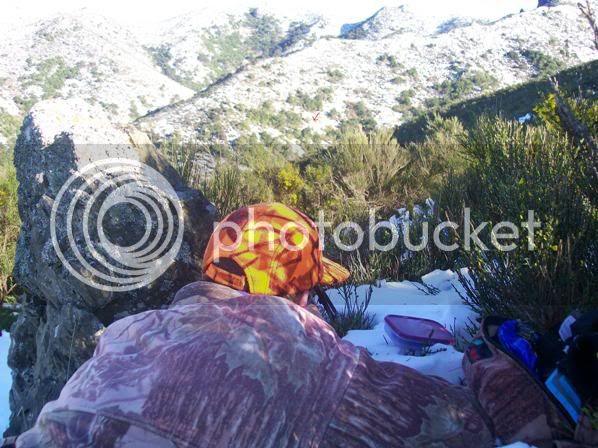 View of the shot. There is a small arrow showing where the hind was standing.

I was using my 7mm mag with 168 bergers at 3087 fps. This was going to be the first game animal I had shot with the bergers.

She eventually fed out so I put the crosshair on her shoulder as she faced slightly away. At the shot she dropped on the spot. After half a minute she slid down the slope off the bottom of the clearing.

It took about 40 minutes to get to her where we found she was still alive! Rob shot her in the head to finish her off.

When we cut her up there was a lot of blood in the chest cavity. There was a large exit wound high on the opposite shoulder.

On closer inspection the shot had hit her high in the shoulder and then angled forward hitting the base of the vertebrae and then exiting through the backstrap and top of the opposite shoulder. There did not appear to be any penetration into the chest cavity.

The shot must have hit a major blood vessel for all the blood to be in the chest cavity though. And why she wasn't dead from blood loss after 40 minutes I don't know. 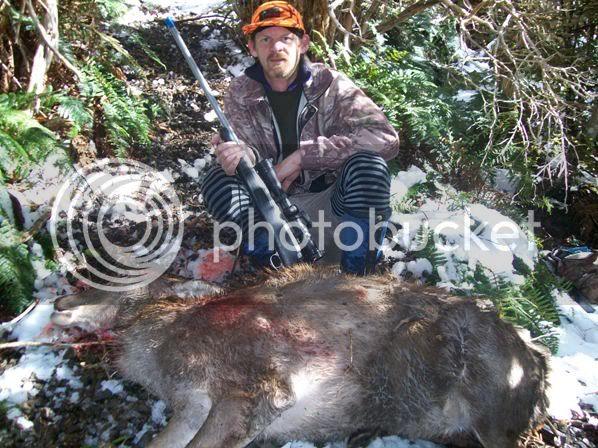 I can only put it down to slower metabolism over winter making death by blood loss/oxygen loss take longer.

You've got me thinking about that metabolism thing.

In the dead of winter here the temps can drop to 30 below(fahrenheit) or colder, plus windchill.

the deer are said to go into a state of semi hibernation until the weather warms. Have to talk to

a biologist about that.