Frogman77 said:
Not a bad thought either...shoot some paper at distance and see what the bullet holes look like.
Click to expand...

1:8 is the minimum for that bullet (per the Berger web site). I agree about the twist rate. A marginal twist rate can lower the effective BC. I built a 264 Win Mag around the 156 grain EOL at 3,000 fps; I used a 7.5" twist. Note that bullets become more stable, not less, with distance, until they go subsonic. "Gyroscopic stability . . . actually increases over [a bullet's] flight." Bryan Litz, Applied Ballistics for Long-Range Shooting, 3rd, Ed., page 160. 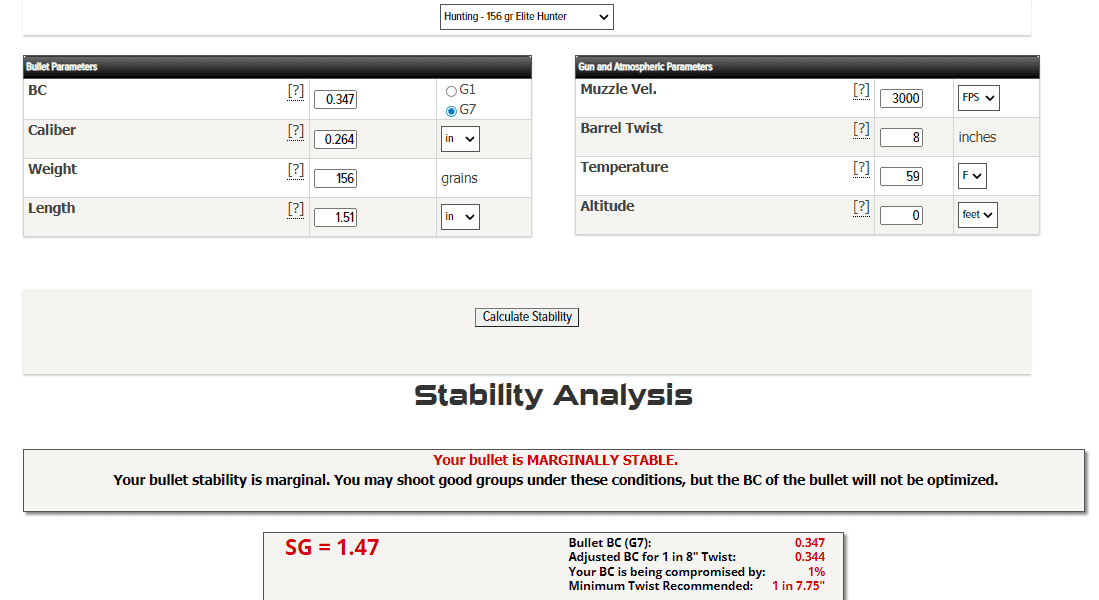 338 dude said:
Scope height was not listed so I just guessed an average of 2 inches also why I’ve shown my inputs in case someone sees some thing that needs changed.I’ve never liked a 200 yards 0 . I zero all my rifles at 100
Click to expand...

You can’t guess on the scope height, it makes a big difference. Measure it and get it right. And if you have a rail with moa cant in it it makes even more difference

muleystalker said:
You can’t guess on the scope height, it makes a big difference. Measure it and get it right. And if you have a rail with moa cant in it it makes even more difference
Click to expand...

OP:
Not sure if you can do this in Shooter, but if you can,
Change your setting from MOA to INCHES of drop and see if things line up for you then.

Just went through this with STRELOKPRO.
MY mistake in settings. I had all my data set to MRAD.

Once I set drop to INCHES I was able to understand it and
fixed my 6.5 SAUM data after truing at 300 and 400, measuring the actual drop in inches. I put the actual drop @ 400 yards in and it corrected my velocity. Shot it again today and it is spot on.

Again, set your drop measurement to INCHES not MOA in your table settings.
See if that helps. Then look at velocity and BC adjustments to match it up.

I don’t know if a 100 yard zero would make a difference as well in doing what I suggest.
Not a math brain

I’m a little late to the party, so somebody may have already mentioned this. Unless you located a bullet that kicks in afterburners at 600 yards, there is no way your “real world drops” are accurate. No way a bullet drops 6 moa from 400 yards to 600 yards and then only drops 5 MOA from 600 to 800 yards. I doubt any app will be able to make those numbers compute. May need to measure drops by shooting a large target without dialing and actually seeing where it hits. 400 and 600 yards won’t be too bad, but you’re going to need a 10-12 foot target to measure drop at 800. Your actual drops might be closer to what your app says they should be. If so, your scope is jacked up. If not, at least you’ll have accurate drops to plug into another app to get more precise results.
B

Looking closely at the data you'll see that in the first group each shot of each string is continually increasing
Each shot in the second group moves around with a very reasonable ES and Mean which did show itself in
the on target performance.

Then I put them back in the magazine in reverse order, fired another round and measured again until all 5 rounds had been fired.
I quickly found that rounds that were all the same OAL when I started were getting progressively shorter with each shot. Recoil was moving the rounds in the magazine driving the bullets against the front of the magazine and back into the case. This caused the internal volume of the case to be changing with each shot. The lessening volume increased pressure increasing velocity. These were 3x fired cases. I had not previously crimped but let friction do its job. From then on I annealed and crimped. I've seen this on a number of calibers with stout recoil. The .270wby mag is a belted magnum.
Click to expand...

Just was out yesterday with my 6.5 PRC and was double checking my inputs and had my bullet data wrong. At 600 yards it went from 9.10 moa up to 9.04. Doesn't seem like much but the farther you go the worse it gets. Just another idea to look at. Good luck.
H

Id strongly suggest getting measured scope height input, zero your rifle at 100y, input accurate zero atmosphere data. Confirm tracking with a tall target test or just shoot on a grid paper at 100y, dial up 5 moa shoot, 10 moa shoot, 15 moa shoot. This will indicate scopes true or not.
Go into the rifle setup itself, ensure there is no sight offset, and the elevation/windage corrections are at 1.0

Ensure there is no zero offsetin the load setting, use actual correct yard zero and zero height.

I personally never use zero atmosphere with 100y zero, but it may help true your issues.

IDSHOOTER64 said:
Just was out yesterday with my 6.5 PRC and was double checking my inputs and had my bullet data wrong. At 600 yards it went from 9.10 moa up to 9.04. Doesn't seem like much but the farther you go the worse it gets. Just another idea to look at. Good luck.
Click to expand...

I shoot the same exact load in my 6.5 saum and have an average velocity of 3040 fps and an es of 6. I shoot in mils and IIRC my calibration was about .3 mils on average beyond what Shooter called for.

So my real world drops are really close to what Shooter gave you as well.

270 WSM is a good choice recoil is that of a 30-06 easy climb I have a Winchester Model 70 that is very accurate and reliable a 243 is also a great choice.
Share:
Reddit Pinterest Tumblr WhatsApp Email Share Link