Primer cratering on all loads

Built a 223 Rem on new 700 action. I'm getting cratering on all loads fired, even factory. A few of my handloads even pierced primers.
I'll try to list as many things as possible to eliminate questions or things to check.
Rifle is 700 build on new action. I trued action using Manson receiver accurizing kit. Bolt face and lugs squared. Closes on GO and does not close on NOGO. Barrel is 20" Green Mountain full profile 1-8 twist.
Firing pin diameter: .075"
Firing pin hole: .078"
Firing pin protrusion: .052"
Handload is once fired Starline brass that was first fired in this rifle. I did not bump shoulder when resizing.
Overall the rifle fires great and have not seen any signs of over pressure in load workup. Other than primer cratering even on lower loads. I have also included a taget fired at 100yd while doing bullet seating testing.
I also tried swapping out the firing pin assy from another used 700 to see if possible weak firing spring spring.
Thoughts?

what primer are you using ?
what are the velocities ?
aww i see a wsr...run
inspect the firing pin after the failure it may be damaged.
look at the primers, they are not flat, but still round on the edges.
my generic numbers with the 69/varget load says you are over max.
2910 with a 69 in a 20 inch bbl...yep MINOR cratering
D

WSR was all I had. Mostly loaded for gas gun and used CCI 41's.
Just started loading for this rifle, had previously fired about 400rds of the Fiocchi and they had craters as shown in picture since beginning.
I didn't see anything on firing pin, will look closer.

What velocity should I target with this combo?
Last edited: May 14, 2019
A

I have a Remington 700 action that craters every single primer, as well. I just stopped caring about it. I have easily shot over 2,000 rounds through it and never had an issue. I will probably get the firing pin hole bushed before it gets its next barrel.

Next what is the rifles headspace set at and how much head clearance do the cases have. 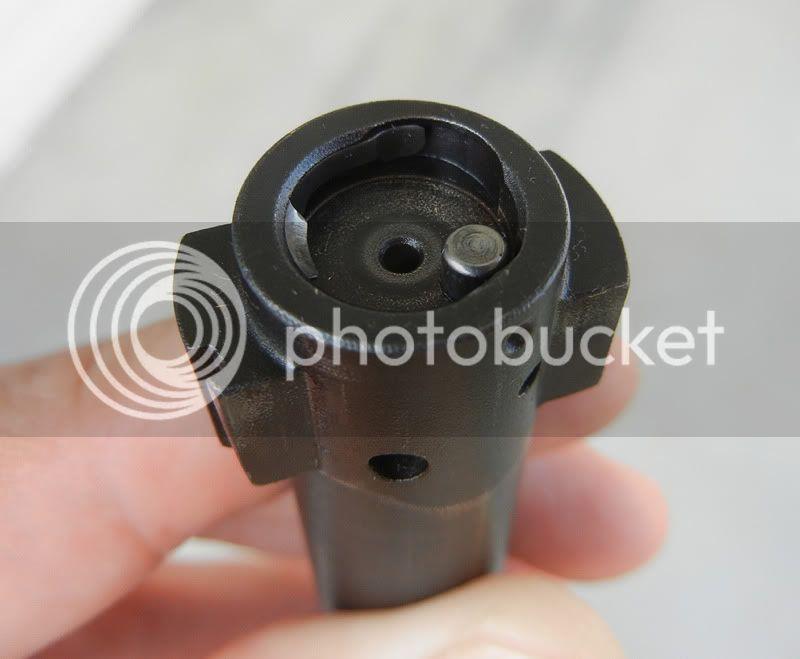 And as stated above the only way to solve the problem is to have the firing pin hole bushed.
Last edited: May 14, 2019
R

I think you ruled out possible head space problem from sizing shoulders of brass too much back. Then the only possible problem could be that you are over maximum pressure (please check load data) which cause the primer cup to be forced/flow inside the firing pin hole and thereby causing a ring around the firing pin indent (see ring on problem primers) which result in the primer cup becoming thinner in that area and which then result in this part of the primer popping out. Lower the powder charge with 1/2 - 1 grain and see what happens. If that is not the problem I would say that it might be the quality of the primer cups. Try a different lot number of the same brand. Also make sure you do not seat bullets into the barrel lands since that could also cause over-pressure.

I also have a Remington 700 action that craters every firing pin no matter the charge. Had to learn to look past that and look for other signs of pressure.
M

Take a magnifying glass and look closely at the bolt face firing pin hole. I bet there is a chamfer on the leading edge of the hole.
Why Remington do this is beyond me.
Bushing the hole is really the only solution.

All my newer remingtons do it I think. I tend to ignore it and watch for other signs.
J

big_matt_duq said:
All my newer remingtons do it I think. I tend to ignore it and watch for other signs.
Click to expand...

Catering on a factory action is somewhat normal due to the loose fit. You can get an oversize firing pin and make it go away or bush the bolt. Anybody can install the firing pin but bushing you would need a lathe. I bush all my remmies to a captive small firing pin. It's a simple job. Catering on a custom action is a sign of pressure and should not be ignored.
Shep
W

Having the same issue with a Mossberg MVP in 5.56mm. Primer edges are round but they crator. Worse yet, I can't even get close to Book Max with H335 or CFE223 and Sierra 65 grain Gamekings. The primer pierces and blows back into the bolt preventing any further firing.