Well I drew a New Mexico second archery hunt in 16B this year. I hiked into the area that I was going to hunt the weekend before and was quite pleased with what I saw. There was water in the little creek bed from recent rains and there were fresh wallows left by the bulls.

I had a buddy pack me and a friends camp in and we got all set up and I walk down to where the wallows were to check them out and a hunter is camped 100 yards from where the wallows HAD been. Why he did this I do not know but he blew all the elk out of there. No fresh wallow sign at all. I was kind of miffed about that but there was a lot of area in here and it was just he and I and he had the first hunt. So on the second hunt, I was the only person in this area. The area that I was hunting, there are not a lot of elk so it gets very, very little pressure. In fact, so little pressure that the trail was almost non existent. That means that even though there aren’t many elk, the ones that are here are very easy to call in. I was not going to be picky at all since I have a antelope hunt in Wyoming the next week.

I get up on the first morning of the hunt and we let out a bugle once we got to the top of a hill. Two bulls respond so we head that way. We get close to one bull and set up to cow call. The bull comes in SUPER fast. It’s a 5x6 and he gets to about 18 yards and I draw my bow back and wait for him to clear some brush. Somehow he hears me or sees movement and bolts a ways out and my buddy stops him with a cow call. I guess 60 yards and take the shot. It hits above him and hits the tree behind him and he takes off. Turns out he was only 45 yards. I am not the best at manual ranging and he was downhill a bit which made him look farther away to me. So we hunt that evening and there is no action at all in the evenings.

We get up in the morning on the second day and get on a bull but he already had cows and was not wanting to leave them so we just cut our losses there and continued down a trail to go check a tank. We had never been in this area and we got to a spot that was just tore up with large rubs. We decided to let a bugle out to see what was around. It sounded just like a red stag roaring. At one point I was debating whether or not we ****ed a Sasquatch off. My buddy said...that’s a bull...as in bovine bull. I said...call again. He did and the same roaring sound was let out. Whatever it was sounded ****ed. Our curiosity got the best of us so we pursued the sound. It was moving away from us...every 5 minutes or so...we would here this raspy red stag roar. We finally got close enough to see that it was indeed a bull elk but we couldn’t ever get a clear look. We pushed him and his 3-4 cows quite a ways. We even separated him from his cows but in the end he gave us the slip.

So we went back down to the non existent trail and continued on to the tank. There is not a lot of water in this area at all hence why there are not a lot of elk in the area. This tank had a spill way/cut in the side of a mountain so it was quite a climb to get to it. We get up there and there are two small puddles of water. One puddle was almost dry and the other was about a week from being dry. Kind of bummed about that we still decided to give it a go for the evening since there was not much action at all with these elk in the evenings. We found three oak trees real close together which made a triangle shape. There were little oak saplings all around it that provided excellent cover. We got inbetween those trees and sat down. We sat there for 5 hours. A fox came in and got a drink and then two Small coues deer Bucks strolled by. None of them noticing us. I had ranged the two puddles and surrounding areas that I thought an elk would go. The small puddle was 33 yards and the larger puddle was 28 yards away. At around 4:30pm, a cow elk comes down and just starts guzzling water out of the larger pool. My buddy is asleep, so I tap him and point. I smile and whisper..should I shoot her? He smirks and says no, let’s see what Else comes. The cow walks up to within 8 yards of us and starts eating grass. We can even hear her chewing. All of a sudden, we here that red stag roar again! We both look at each other in amazement! The bull roars again and comeS walking to the small puddle He bends down and starts to drink. I pick up my bow and draw it back. The cow looks up and spooks at the sound and the bull looks up but not too alarmed. But now he is kind of quartering to me. I put the lower part of the point of his shoulder between my 30 and 40 yard pin since he was 33 yards away. I squeeze the trigger of the release and the arrow flys true and hits him right where I am aiming. He rears up and kicks out and runs off into the trees. We could hear a loud crash which meant the bull went down. My buddy was videoing the whole thing And we re-watched it to make sure it was a good hit. We gave high fives and celebrated after viewing the video.

We went out and found the arrow. It was a clean pass through and the arrow was covered in bright blood from broadhead to nock. We follow his sign out for a bit and find the bull piled up and dead. He got about 70 yards away before he died. He was bigger than we thought! By far the biggest bull that I have ever killed! It would have been a 10x7 had it not broken off a second sword tine on its left side. I suppose while fighting. It has a third eye guard on the left side as well.

We used a garmin in-reach to text my buddy to tell him to meet us with the horses in the morning. We caped it out and quartered and deboned the meat and packed it all out down to the trail. We didn’t get back to camp until 2:30am. The next morning my buddy came and we packed out everything on the horses.

I have never heard a bull bugle like that. If you are wondering what it sounded like, google red stag roar and listen. Was an amazing hunt but very physically challenging with the terrain.

Not that score matters too much with a bull with all of this character but he measured 343 5/8”. He looks a lot bigger than that and would have been in the 350” range if he hadn’t broken off one of the bigger tines. He has pretty short fronts which hurt his score as well. He has good mass in the back though which I think makes him look huge. 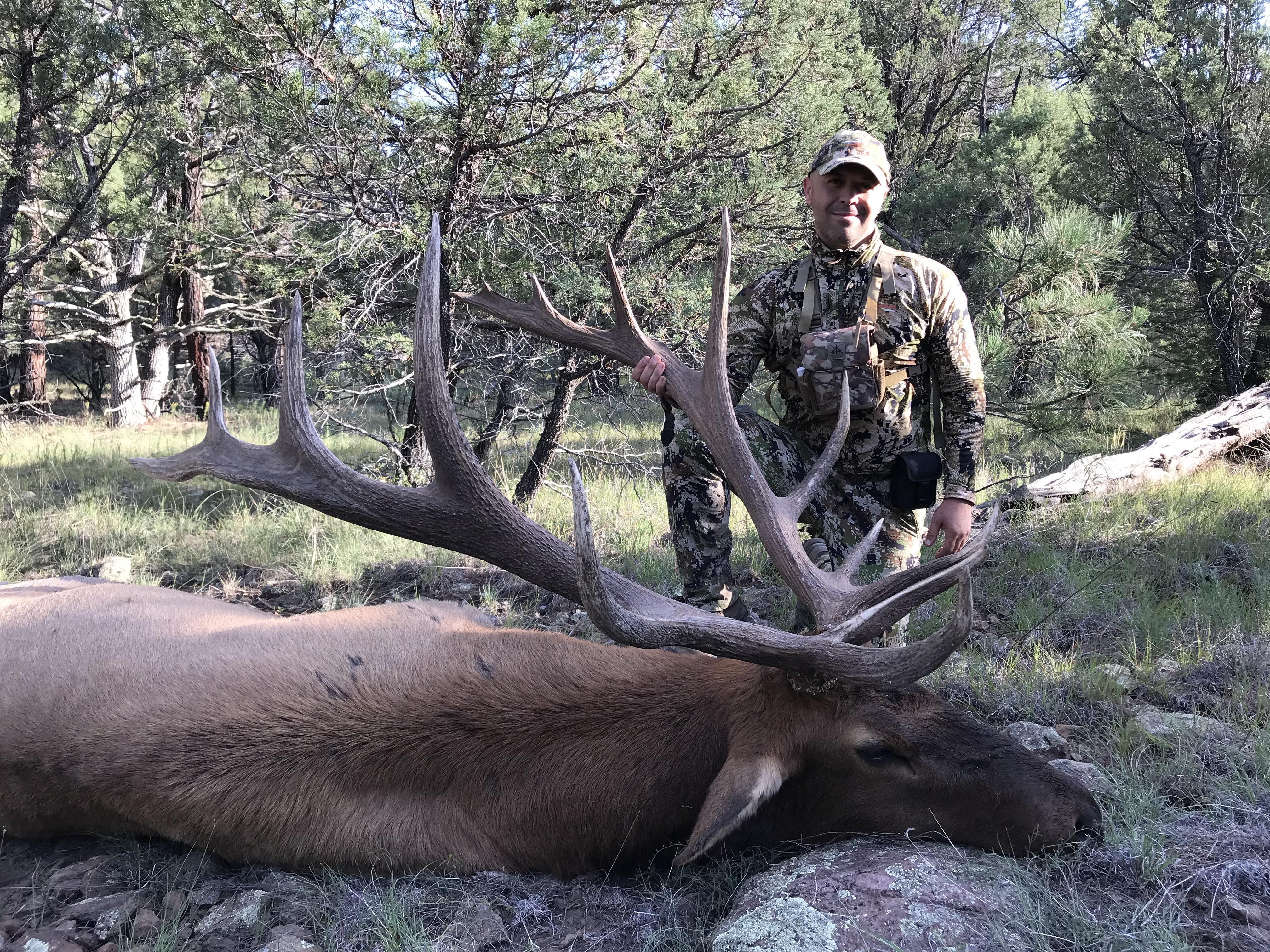 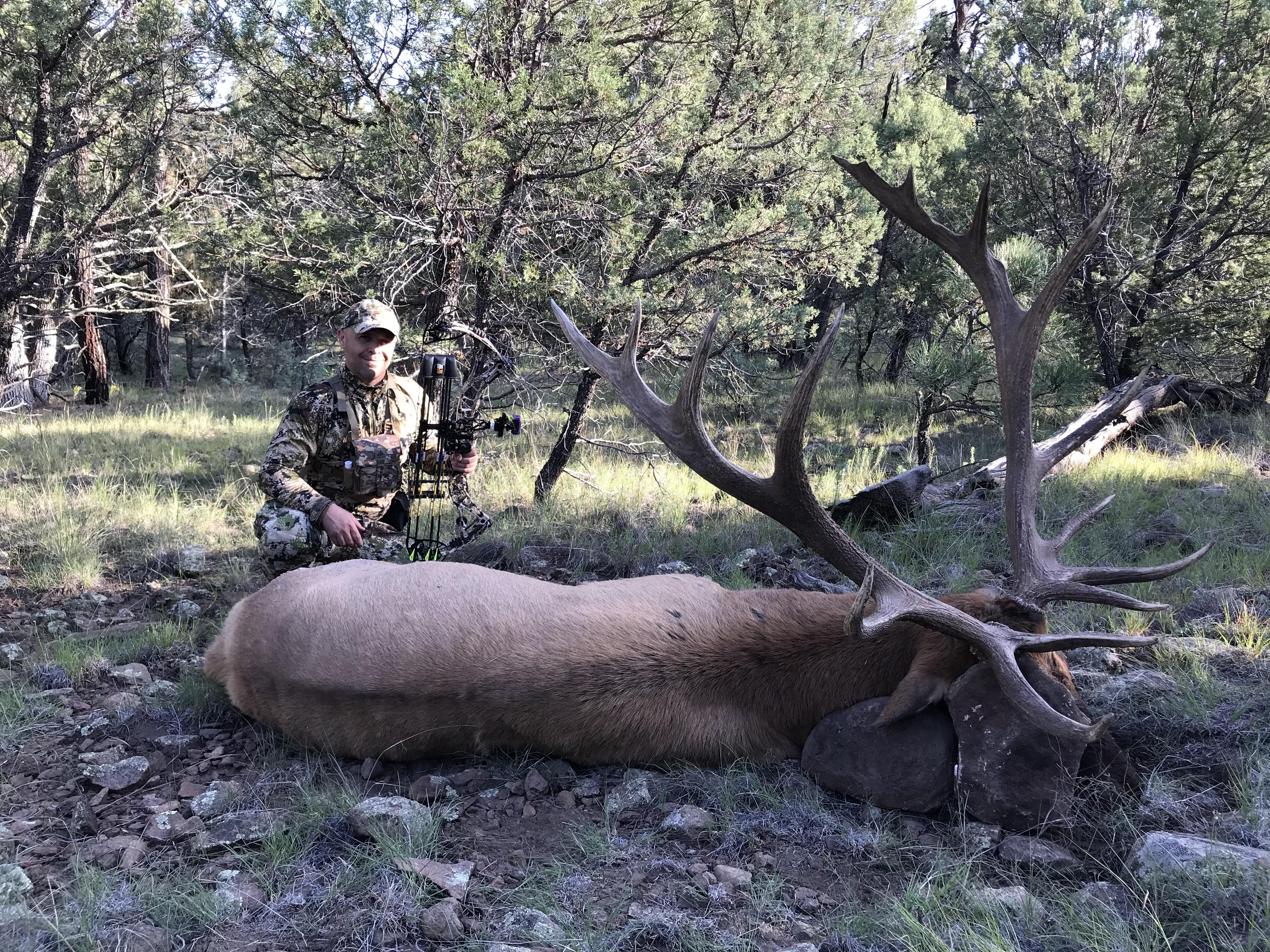 You can see in this pic where he broke off his second sword on the left side. It would have easily been 10-14” based off the other sword. He would have been in the mid to high 350” range of it hadn’t broken off. But an awesome bull none the less with a lot of character. 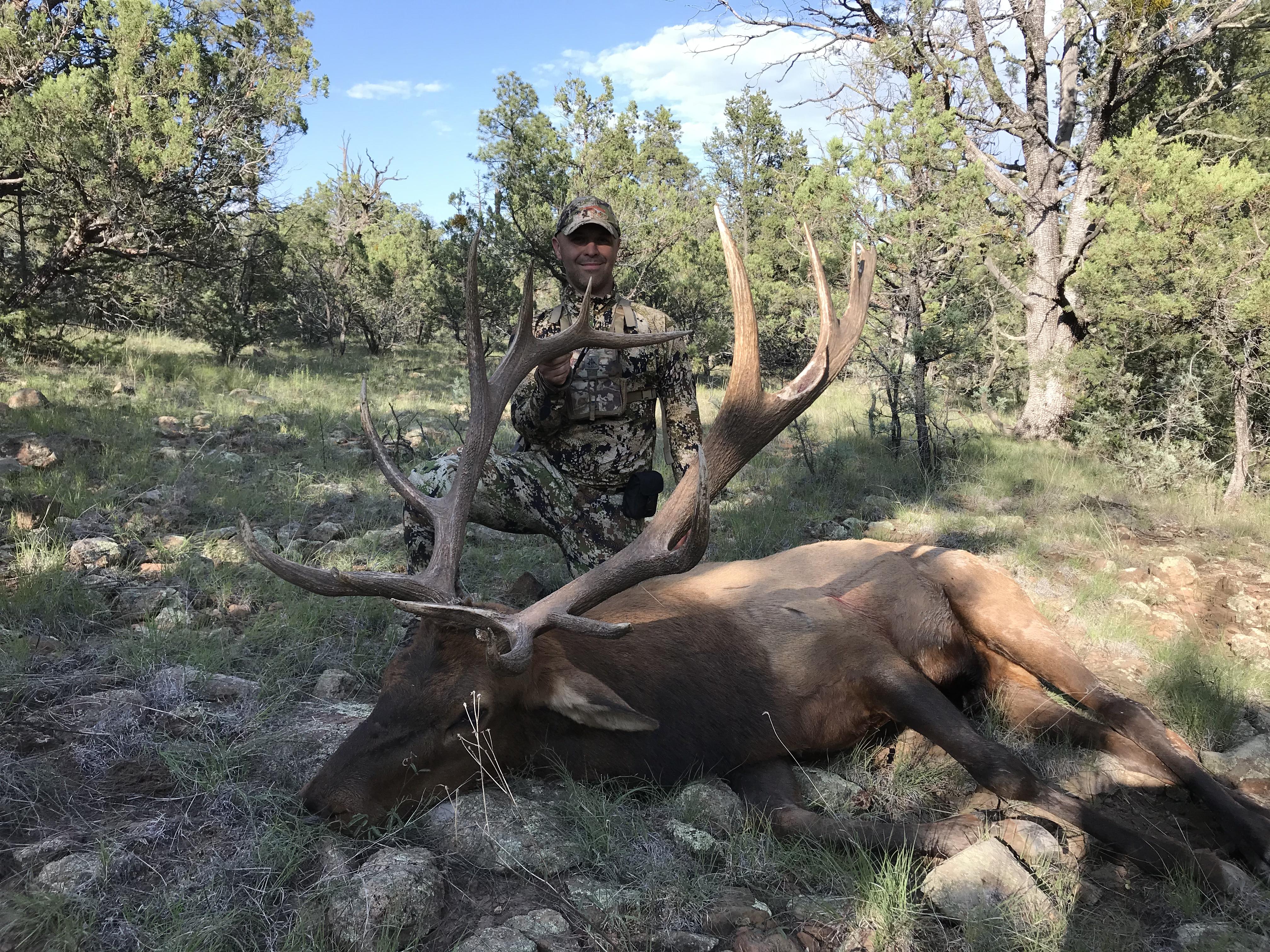 If anyone has an iPhone and knows how to post a video on here, I can send it to you if you pm me your number.
D

That is one nice bull, Congrats!

Thats a great bull! Love the character. I hunted that area a lot in the late 80s early 90s. Beautiful peaceful country. I appreciate that it's a no motorized traffic area and basically one road through it.

That’s good work. Any archery kill is an achievement, one like that is the bull of a lifetime! Congratulations
L

So awesome, congrats. Love the story and the character of that bull......trophy for sure. Been waiting for some 2020 elk Hunt stories and pics......great early post to kick it off.