Reading the details cases are based on .416 Rigby, and designed to work in a standard length action. They will be sort of like a longer version of Winchesters WSM cartridge line.

They say the cases are larger with more powder, produce higher velocity than the comparable WSM cartridge. The brass should be of a high standard to!!!
9

Last November I took two ".338 Norma's" to the Sniper Competition at Ft. Benning where they were displayed and shot by the Cadre and everyone else that had an interest in them. The one that everyone appeared to covet the most, including myself, in this one:

It had a 21" Kreiger Barrel with a 1:9 Twist and threw the 300 grain Sierra Match King downrange at 2690 FPS. It doesn't seem like much however this cartridge has more energy on target at 1700 meters than any of its class competitors. It weighed in at under 18 lbs.

The rifle had Badger Bottom metal, Jewel Trigger, McMillan Stock, Schmidt Bender 5 - 25 X 50 Scope, an "Angle Cosine Indicator" and a TBAC (Cheyenne, Wyoming) can on it.

This cartridge is worth talking up, and with the correct chamber cut, will perform exceptionally well, and deliver exceptional accuracy. I believe that the powder charge was 80 grains of Retumbo or similar... Jared Joplin of Patriot Arms is rumored to be in the process of producing this build... http://www.patriotarmsinc.com/default.aspx Surely Shawn Carlock is jumping on this???
Last edited by a moderator: Jan 13, 2009
A 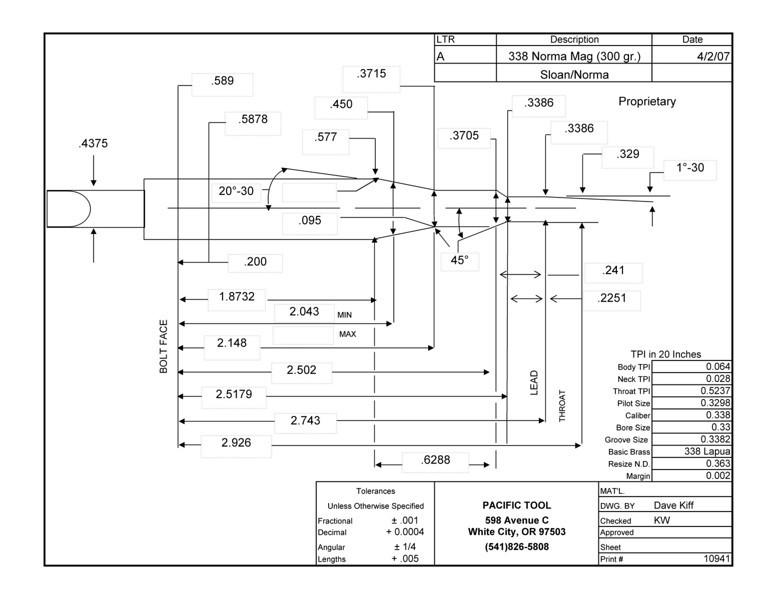 Akkill - you'll have to download the 2008-2010 catalog. Its listed under the Norma tab and click on Download. I tried finding info about them as well to no avail until I downloaded the catalog and there is where they talk about the new Norma Magnums.

[QUOTE=WWB;It had a 21" Kreiger Barrel with a 1:9 Twist and threw the 300 grain Sierra Match King downrange at 2690 FPS. . I believe that the powder charge was 80 grains of Retumbo or similar...

i would have to see this to believe it.
9

"i would have to see this to believe it. "

That is Exactly what I said. I Saw it, I Shot it, (both here in Colorado and on Burroughs) and it Will be my next firearm.
You must log in or register to reply here.
Share:
Reddit Pinterest Tumblr WhatsApp Email Link