My wife uses a clamp on from Witt Machine for her Weatherby Vanguard Camilla in 7mm-08 and my 55 Lb 12 year old just took his first mule deer buck with it. It literally has the recoil of a .223 with the brake. Yes, it's loud, but it enables you to use one of your current favorite rifle/cartridge combos for under $100, and it is a directional brake meaning you won't get dust clouds as much and have gasses discharged into the ground directly.

Make your rifle more fun to shoot!!!<br /> Our Clamp on Muzzle Brakes are precision machined to YOUR exact barrel specs.

Gibbshooter43 said:
I’m really glad that someone else has love for the old 250/3000 Savage. For the distance you refered to as your shooting range, it’s not only a joy to shoot, but it just plain kills. I have a torn rotator cuff and shooting it is easy. It, and my Tikka 222, are my ‘next to the back door guns’ for anything that mistakenly wanders past. In the past year it has accounted for coyote, bobcat, deer, and a turkey who simply ‘last his mind’.

And with all the 22 caliber talk, don’t forget the venerable 220 Swift. With the new Hammers, it deserves a resurgence. Just sayin’…
Click to expand...

.220 Swift of course one of the all-time greats. I shot one for many years hunting Yotes, an amazing cartridge, along with my, .22-250 and .224 Wby Mag, but in the end, in the order of usage for most Yote hunts it was, .220 Swift 55gr, .223 Rem 80gr, .224 Wby Mag 50gr, and last but always a top contender my... .22-250 Rem 65gr. But I digress; the idea was, recoil mitigation the .223 Rem pound for pound is the winner hands down with an 80gr plus bullet. I love the old-school cartridges like the .250/3000 Sav and even the 6mm International based on it, one of the reasons I re-barrel my... .22-250 Wby MkV miniature action hunting rifle to a 6XC after talking with Tubb one year shooting next to him at Raton NM. In the pic is the re-barreled MkV Wby Varmintmaster .22-250 too 6XC and the bottom is my other MkV Wby Varmitmaster in .224 Wby Mag, these are very lightweight and trim hunting rifles great to walk with all day.
Back to .25 cal, the softest shooting .25 caliber I ever owned was a Remington Model 14 in .25 Rem... great shooting little pump rifle with "very little" recoil, the ones we let get way over the years, darn.
The bottom pic is my old Rem 700 .220 Swift with a Yote that thought he could outrun it! Cheers 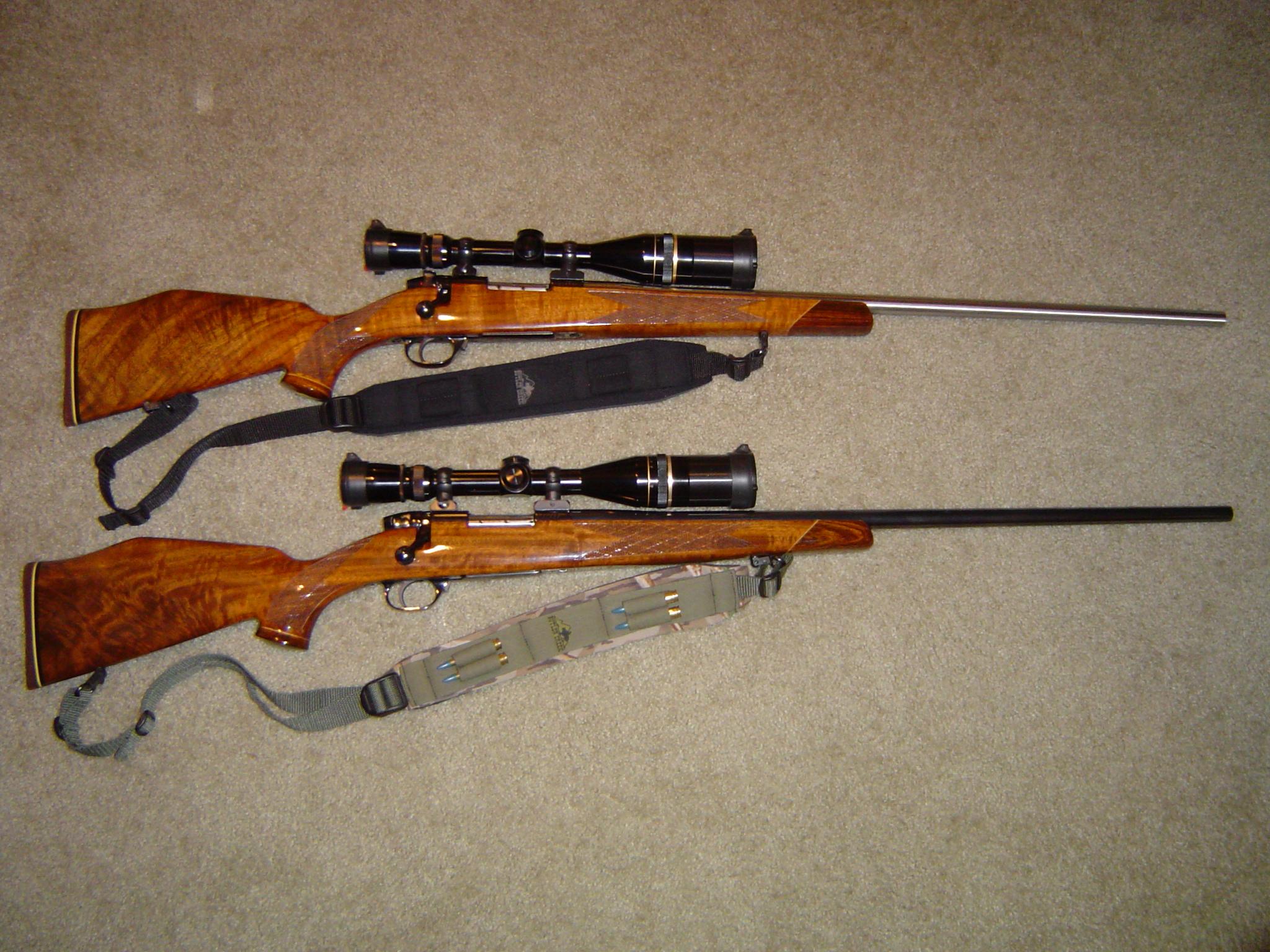 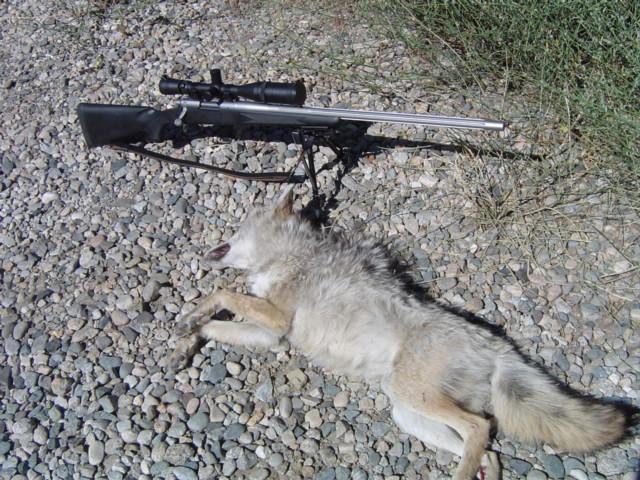 One fact missing here is the law--that .22 anything is not legal for big game in some states.
T

My vote is a 25-06. Even shooting the 117 sst rounds produce hardly any recoil. Could go with something a little lighter too. Then you wouldn't have much recoil yet could still have a 500 yard plus varmint/deer rifle
H

If you like AR type rifle get a 6mm ARC upper or complete rifle from CMMG or whoever is producing them now. Out to 400 yds totally adequate for deer. Recoil is very mild, no more that I can tell than 5.56 round. If you reload just get a 243 and load down to a velocity you can tolerate. A lighter bullet will recoil less. Would not go below 65 grains for deer sized critters.

After years of beating the crap out of myself with light rifles in "heavier" calibers, I switched to a Wby Vanguard 2 in 6.5x55 Swede. You can get ammo from 85gr up to 160gr. Because the Wby has such a long throat before the bullet engages the rifling, I'm handloaded up to 2720 fps with zero pressure signs. I stopped at 2720 simply because I have 4 touching at 100yds and I don't need any more than that
They look odd when loaded because the 140gr bullet is so long, however, that extra length always provides an exit wound which is really handy for those thick skinned Canadian Whitetails.

worth a look and nothing fancy about it

Location
The Great Republic of Texas

I have an 8lb 223 with a muzzle brake - recoil similar to a rimfire. I don't know how recoil sensitive you are status post surgery. I expect you don't want to get close to your tolerance. A well placed, premium bullet that penetrates well, like Hammer, will check your boxes in the 223.

I run a 6.5 grendel with Lapua small rifle primer brass

Only very few 6.5 Grendel brass uses LRP. PPU/Wolf is one that uses LRP.

Hard to beat a .243win on recoil. If you're looking at a .223, there's a few that come with a threaded barrel. I have a Ruger American Ranch that I put an SJC Titan muzzle brake on and foamed in a mercury recoil reducer into the butt end of the stock. I wanted the least amount of recoil for when I take it prairie dog hunting, have my scoped zoomed in and want that immediate follow up shot. The thing recoils about as much as a .22lr

Hello Alan, I fully understand what surgery can do to a person's ability to shoot. I have had friends with similar problems. OK fist of all the 6.5 cm is hailed for having light recoil. I personally have not shot one simply because the people around here kind of hold that cartridge in contemp. They have found that all the accolades that were published in order to get people to buy rifles in this new caliber were way overblown. 2020 was the year of the 6.5 cm with millions of new rifles from all manufacturers being sold. 2021 so far appears to be another record for the 6.5 cm as an large number of them being traded in on more conventional calibers. From what I understand from others and keep in mind that this is second hand information is that the 6.5 cm does live up to recoil claims it does not live up to it's claims as a long range hunting round. At 500 yards it seems to fizzle out and loses velocity and energy while old standards like the .270...shall we say...kicks it's butt all across the board with the exception of recoil. I wont even mention others that kick the panties off of the 6.5 cm at reasonable hunting ranges.

Now looking at what you already own I see a 6.5 creedmoor is in your gun safe. As mentioned earlier that rifle has been extolled for having a light recoil. For shooting medium game such as antelope, white tail deer and mule deer it is entirely adequate out to about 300 yard, maybe 400 depending upon the load, but with your physical issues probably light loads would be advisable. Lighter loads will reduce recoil tremendously. I would probably limit the bullet weight between 100 to 120gr Nosler Accubond or Partition. There are a variety of loads for those bullets that even at the minimum will still leave the barrel between 2700 and 3000 fps. Light bullet and light load equal less recoil with still acceptable ballistics for medium game at reasonable ranges.

Lets move on to the rifle. You did not mention what kind of 6.5cm you have. Most 6.5 cm's sold did not have much if any measure of recoil reduction installed. To reduce the already light recoil of the lighter loads your rifle will need a good recoil pad such as a Limbsaver, which greatly reduces felt recoil. They claim up to 70% but that might be a bit of an exaggeration. The next item is a good muzzle brake. I don't know how much reduction you will get out of a 6.5cm but I do know that with the recoil pad/muzzle brake combination on my 300WM has reduced the recoil to less than that of a .243. Theoretically take your 6.5CM shooting light but effective loads with a good recoil pad and muzzle brake and you should be somewhere in the vicinity of a .223/5.56 or less.

You are going to hear many thoughts on how to reduce recoil to where you are comfortable to shoot again. Many will recommend any and all different solutions. Many will also not like my solution here. So be it. It's up to you to determine how you want to handle this and only you. Depending which gunsmith you take your existing rifle to it should cost no more than $300 to get your 6.5CM comfortable for you to shoot.
Share:
Reddit Pinterest Tumblr WhatsApp Email Share Link