Yes, the problem you are likely to face is not 95 degrees at 10,000 feet, but 20 degrees and even 20 below later in the season.
So, what's likely is you load developed at hot temps a lower elevation will slow down due to temp and effect on burn rate, but
speed up over distance range due to lower air density. So, its really impossible without detailed modeling or taking actual sighting
data and velocities on spot to know what the combined impact will be. Got to sight and take velocities at altitude and temp to
really get a handle on it. Any your velocity node from load development is possible out the window a bit too from temp. slow down.

So, getting some 100 yard group size at altitude and temp. is not a bad idea either. Like benchrest guys who travel a lot to matches in different altitudes and weather, having a barrel tuner to make fine adjustments to temperature and burn rate for loads developed
back home is not a bad thing either. Hard to change ammo once developed, but your barrel tune can be easily tweaked at the new location with a tuner for any ammo.
S

It sounds as if I'll need to bring my LabRadar with me and take a few test shots once I'm in the area. As far as shooting over animals, I have done that before with a 6.5 cm that had a load developed at near sea level on the coast and 90F temps. Took it to Rocksprings, TX, approximately 2,500' elevation, and 60 degree temps. Shot about a foot over a blackbuck doe at 400 yards. After that, I decided to actually use my kestrel and make a new dope card to 500 yards and did not have anymore problems the rest of the trip.
S

Not sure if Temperature Stable means linear rise or what. Website and the bottle conflict though. 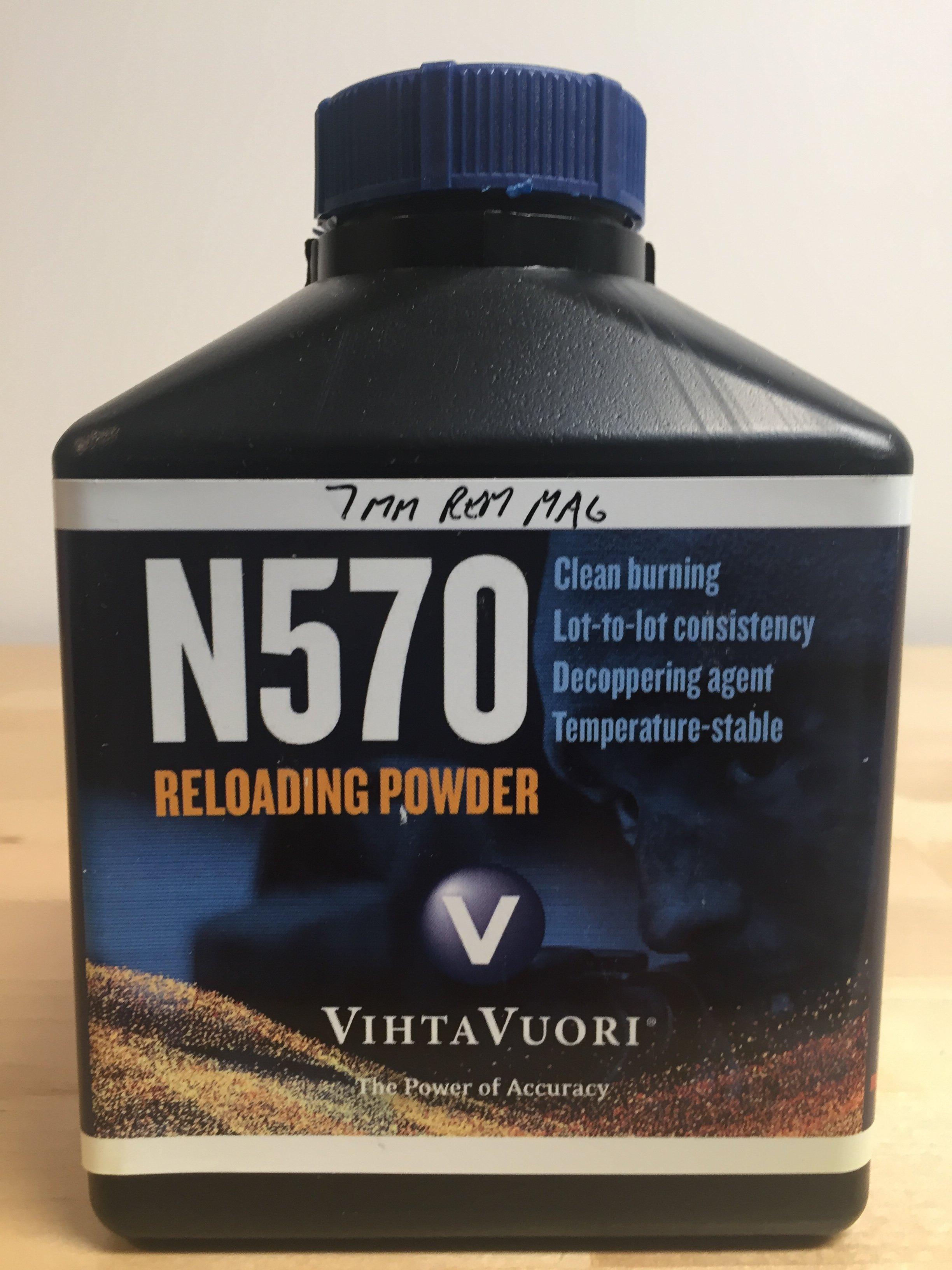 Yeah, I always thought N570.was supposed to be stable and bottle says so, but website only makes claims for N565 and N568.

I can tell you N560 is NOT temp.
stable.....from my own Texas expeience this summer. Neither is RL 26

Actually, the temperature stable powders are much better than the old non stable powders, but that doesn't mean they don't change at all. Like all of your dope, record temperature and velocities for reference. I seriously recommend bringing a Magnetospeed wherever you go to shoot, and confirm velocity, especially when you are radically changing environmental conditions.
I

Towards the bottom Shawn tells his experience with it when developing his 338 edge +p.
I've had great experiences with it as well.

In the early spring of 2008, we started looking for a way to reduce peak chamber pressure to allow more and or different powders to be utilized in any given round for additional velocity. The primary concern in this project was, of course, accuracy retention. We knew that we could gain 100 fps...

slowshot18 said:
I’ll give this a try this weekend and see how it goes!

Thank you! I’m going to try the cooler method on the way to the range after they’ve been in the freezer before I leave.

Rich, do you see a drastic difference in velocity from working up a load in the summer and then trying it out in the winter?
Click to expand...

Not with 570!
Ive done the ice chest test, and at 70 degrees found virtually no difference
V

Here's the thing
......I don't generally like the freeze test though in this specific case it may be informative where going from hotter to cooler or cold climate and you are most worried about loss in velocity.

The issue I have w freeze test is when one develops a hot max velocity pressure load in moderate weather and then tries to use it in very hot weather. I think that freeze test is then useless in that case. Because when a load is a hairs breadth from 65,000 psi at 70 degrees and you take it to 100 degrees, and you think your powder is "insensitive" cause you did a freeze test, I hope you have unlimited surgical insurance and a reputable life insurer.......because IMHO losing speed and pressure in cold weather aint the same fps gain in the hot direction. The closer your load is to "rifle scrap metal"
at 70 degrees, it becomes a bomb at 100. The response curve for burn rate vs. temp may be somewhat linear over reasonable temp. ranges at reasonable charge weights.

But once you get out on the limb, that curve becomes exponential on the margin, and it will either surprise you or hurt you. Just my opinion. Ie, hot loads taken into hot weather will act bizarro world.

Hot loads taken into cold weather Arent a safety issue, but more of a hunting accuracy and performance issue.

Like Clint Eastwood says, a man has gotta know his powder's limitations......

Burn rates are not a constant!

They are not even very consistent from one powder lot to another.

You get a new jug of powder, your pet load no longer drives tacks?
wonder why? It has to be tweaked.

Extruded powders and those labelled extreme or insensitive act best, but even they can whacky out on the ends of the temp curve vs. burn rate and pressure.

Veteran said:
Yeah, I always thought N570.was supposed to be stable and bottle says so, but website only makes claims for N565 and N568.

I can tell you N560 is NOT temp.
stable.....from my own Texas expeience this summer. Neither is RL 26
Click to expand...

So then if I only want temp stable powders then I really don’t need these? Perhaps I should dump them out?
Crap. I just remembered I have two more N560’s coming too. That’s a lot of powder to dump. 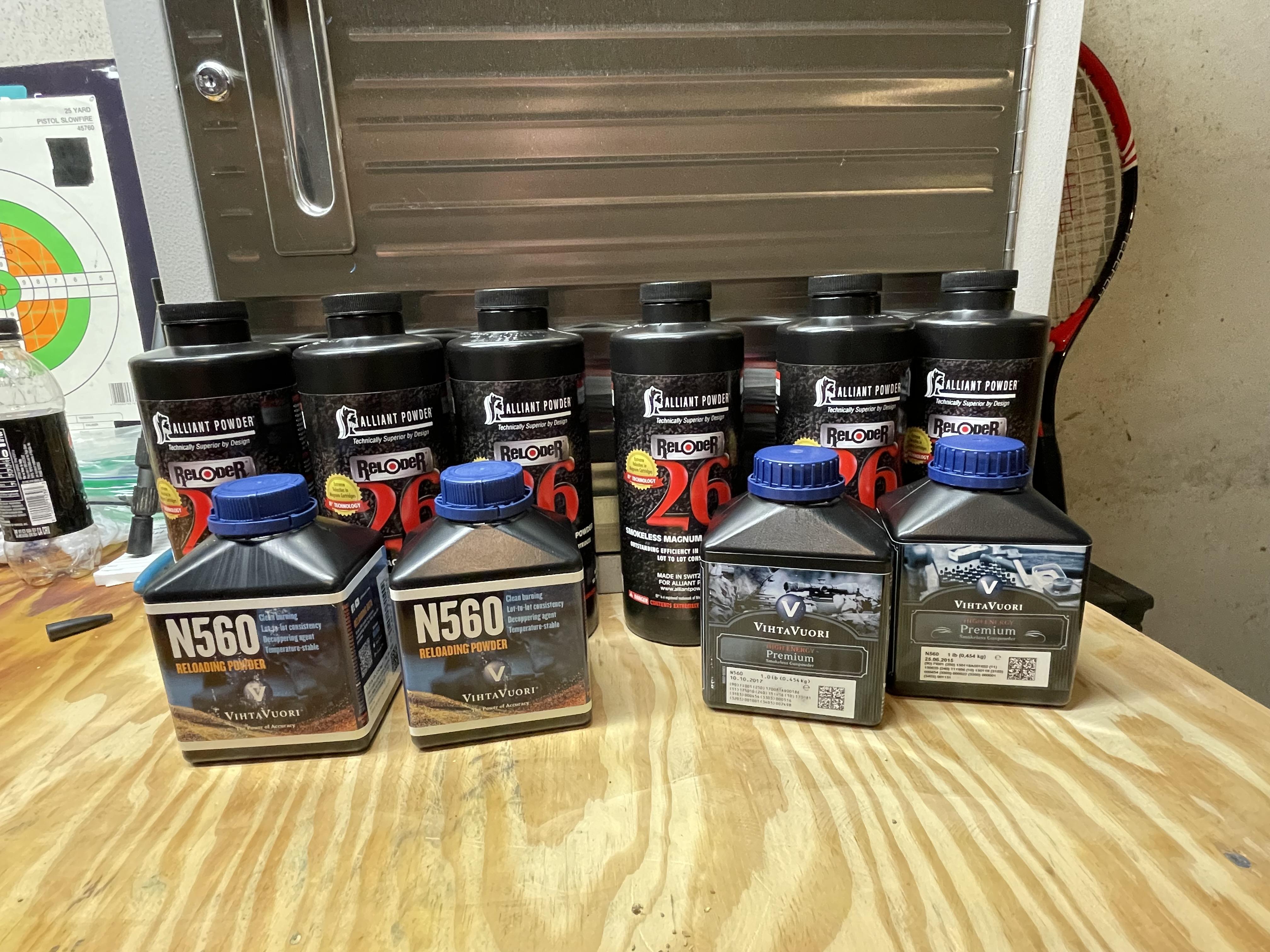 Yeah, from the looks of it, you are hosed fer shore.

I havent had any problem w N560 or RL26 here in Michigan.

Its loads I developed here when exported to Texas in August that gave hiccups.

meatyrem said:
So then if I only want temp stable powders then I really don’t need these? Perhaps I should dump them out?
Crap. I just remembered I have two more N560’s coming too. That’s a lot of powder to dump.
View attachment 305729
Click to expand...

At least your grass will be green going into the winter....
M

I won't dump the powder out. See about trading them for something else. See if you can get H4350 or H4831. Both are very stable powders. H1000 probable almost impossible to get presently. I realize that there never enough time to do things, but you might work on testing some of your load in the higher elevations there on site or close to there. I don't know if you are hunting with a guide or on your own. Either way you be able to get somewhere in Colo to do some testing. Note the difference and adjust you info. You already know what your rifle does at lower elevations and temper. So it shouldn't be that hard to develop a shooting program to do what you need there in Colo.