My biggest mule deer ever

Sept 15th produced the biggest mule deer of my life with much credit to my good friends Neno and Miriam that packed in our camp with 6 of their mules and my one horse into the Gros Ventre Wilderness of Northwestern Wyoming. Neno hunted beside me as I was his resident guide. Neno is 69 and I am 60 and we were hunting in steep rocky country where I had spotted several big bucks last year that I couldn't get into position on when my old mustang mare decided she didn't want to leave camp. With a trek that was over 8.5 miles from where base camp was, at my age 4 legged friends are a necessity.

On the late afternoon of Sept 14th, after finishing setting up camp that required two trips in to get all of our needed items to prepare for any type of weather, I headed up the mountain behind our camp to glass for deer. Within minutes I located a large buck that was in the exact location of where I spotted two large bucks last year. I raced back to camp to get my spotting scope. Upon returning the buck didn't disappoint. He was huge. I only got to look at him for a couple of minutes before he walked out of sight.

Opening morning at first light Neno and I headed up the mountain in the direction that I saw the big buck. We climbed steep rocky slopes and finally set up on a jagged rocky ridge with a cliff below us. Within 20 minutes or so we saw several little forked horn bucks and we knew we were in a good spot. About 10 minutes went by after first seeing the small bucks, we saw a medium sized 3 point and then I got a glimpse of a big buck as he walked out of sight within seconds. We both set up our rifles on our packs to be ready for a quick shot if needed. The deer were only 200 yards away, but we had a very narrow shooting window. Minutes later I saw a large framed buck standing broadside in my shooting lane and I told Neno I am going to shoot and within 3 seconds I pulled the trigger on my 338 RUM and sent a 225 gr Accubond traveling 3200 fps towards it's mark. I clearly heard the bullet make contact and saw the buck collapse and saw no movement. Neno told me he is still up and I told him no he's not, he was looking at another buck. After all of our hard work, Neno decided to end his hunt and dropped the hammer on a 25 inch 4x4 from his 7 mag with 160 gr Accubond. I saw the deer running down a steep shoot but I didn't see him drop. I went over to where we shot at our bucks while Neno guided me to where he shot, I could see my buck down, but I was looking for blood from Neno's shot and I couldn't find any.
I walked over to my buck where at first glance I thought I had mistakenly shot a small buck from looking at the distance between his rear forks that looked narrow. I couldn't have been more wrong! As I got to the deer and held his horns in my hands I was amazed at his size. I knew I had finally broke into the 200 inch club. With 9 points on one side and 7 on the other and incredible mass I knew I had killed the buck of a lifetime.

Neno started caping the head while I starting quartering and cutting off edible portions of meat. I put the quarters in game bags and put both rear quarters in my pack along with my rifle. I struggled a bit to get the pack on my back and Neno took the back straps and antlers on his pack, while I grabbed the front shoulders with my hands. We started making our way down the steep side hill that proved to be an extreme challenge. My toes were jammed hard into the front of my boots and after 15 feet of walking I needed to stop and rest. This was too much weight for me to go a long ways with. Eventually I made it down far enough where Neno thought he could get the mules to pack out the meat and then low and behold we stumbled onto Neno's buck. Both of these bucks had huge bodies, over 300 pounds live weight, the two of us could barely move either one of them. Neno gutted his buck and was able to drag it down hill about 75 yards to a point where he thought he could get the mules to the deer. I got my deer packed down to where his deer was by lightening my pack and using his walking stick to help me balance. Did I mention that it was steep! I told Neno that I would cape and quarter his deer while he went for the mules. I then realized that I was spent. By the time Neno and his wife Miriam came back with 4 mules, I had only got 1/2 of the deer quartered and I was slowing down, I needed a nap! Neno finished the caping and I got the rest of the meat cut off and loaded onto the mules. All that was left was for me to follow the mules down off of the moutain, they beat me back to camp by a good hour. It took us two pack trips to get our camp out and since we were 8.5 miles from the trail head, it meant a lot of saddle time. After a day of rest on Friday, I got the tape measure out and did a rough SCI scoring of my deer and it came it at 216! I have hunted this area for over 22 years and have killed some great bucks and seen even bigger bucks killed by other great hunters, I am humbled.

After getting back to camp after killing my deer, I sent a photo to a good hunting buddy that often hunts the same area and he quickly sent me back a photo of the deer I killed taken the evening before the season opener. The person I glassed on top of a cliff had also been watching this buck and had pictures of him for several years. Apparently it was just my turn to have luck this year as the other hunter whose name is Steve is much younger than I and in much better physical shape, and undoubtedly will be chasing these high country monsters for many more years to come. Me on the other hand, I will take it one year at a time. 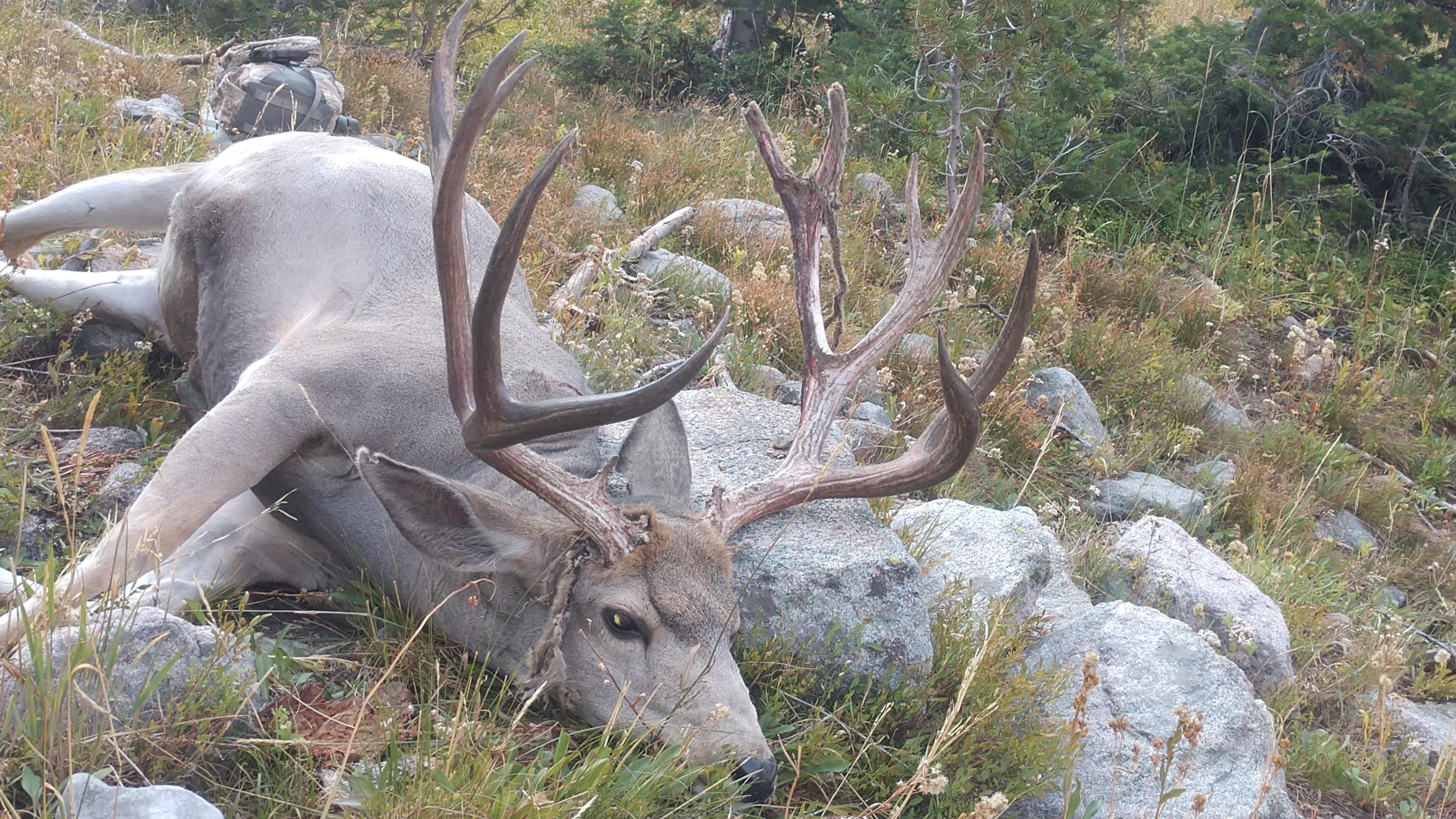 Nice work!
I had heard about this buck before the season
Thats some nasty country in that area
J

wyodeer said:
Nice work!
I had heard about this buck before the season
Thats some nasty country in that area
Click to expand...

I had eyes on him last season, I just couldn't pull it off.
L

Great buck! Sounds like a great adventure as well. Congrats

That's awesome ! Great buck and enjoyed the story. Keep at it !

Wonderful story. Thanks and congrats!