Went to pick up my custom 300RUM last weekend. Immediately drove to my buddies place (also an LRH member) for barrel break-in and to test some loads to find the upper limits. Barrel break-in took all of five rounds. Shot varying loads of Retumbo and H1000 with 208Amax and 210VLD and can push them at ~3100fps.

Primary purpose for this rifle will be for longrange deer (read: 600+ although the cartridge is capable of 1200+ on deer) and it will also engage some steel plates as far as I can dope the wind (pity the groundhog that pops his head up while this rifle set up). The rifle is designed as a 'prone gun' meaning it will be taken to a firing point and shoot. Not much 'carry' in this rifle.

Here are the specs:

All work expertly done by Kevin Cram at Montour County Custom Rifles. I highly recommend him to you www.MontourCountyRifles.com He is also an LRH sponsor. His screen name is 'Kevin Cram'

True load development will start soon and will post those results as soon as they are available. Let me know what you think. 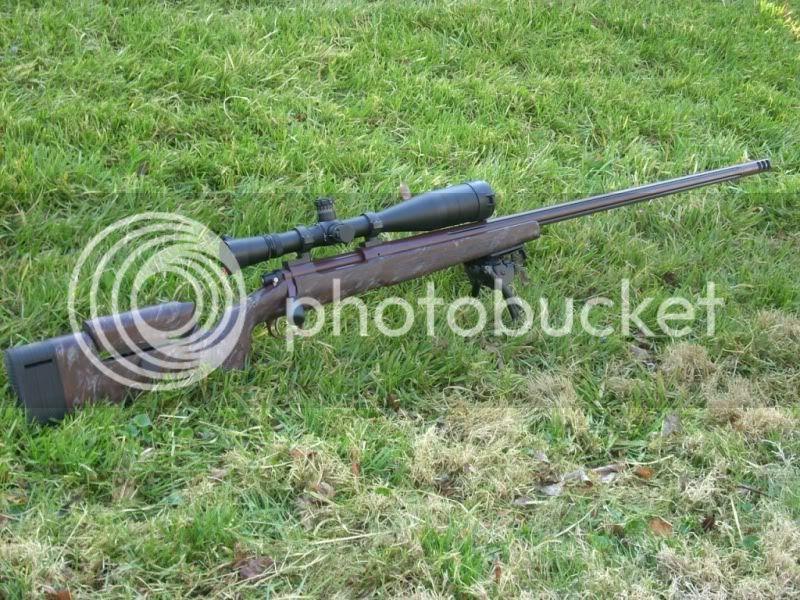 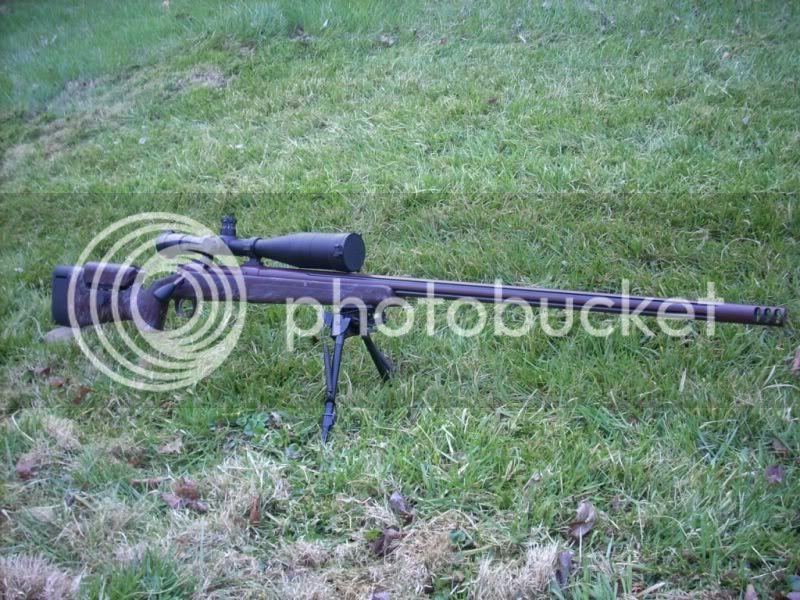 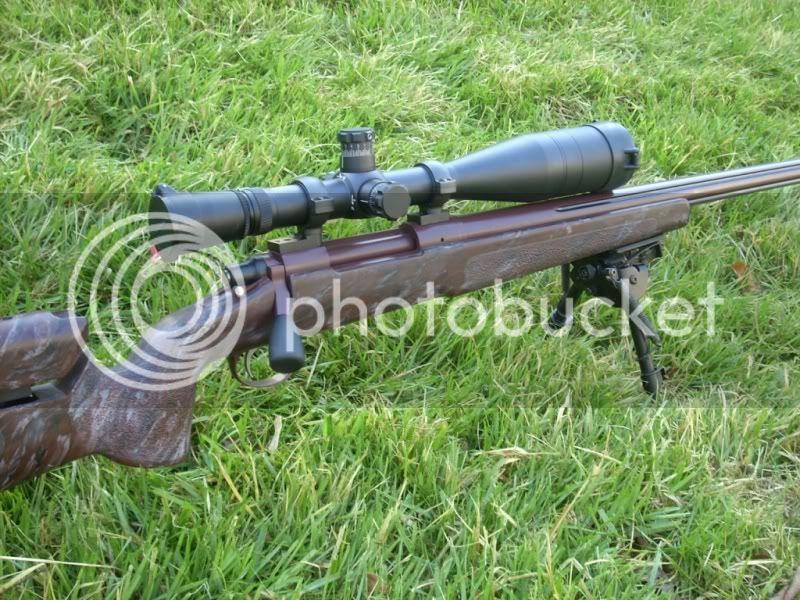 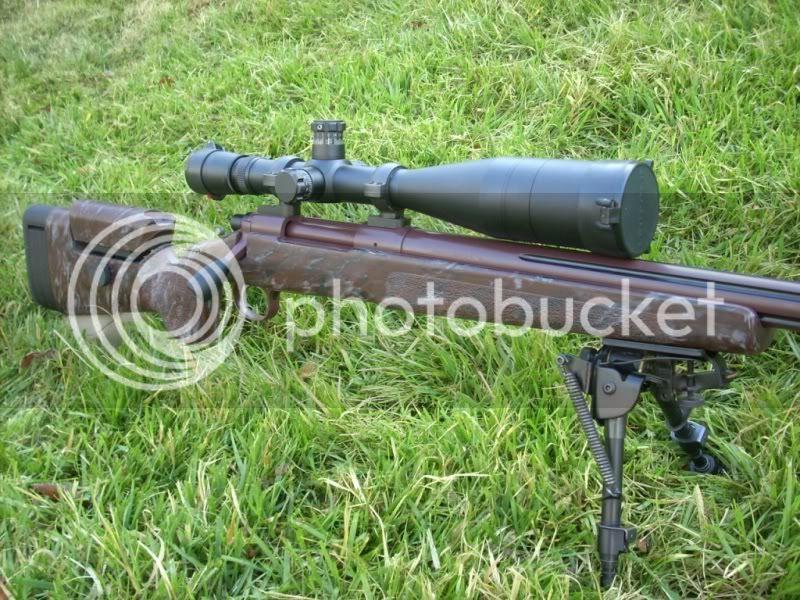 Also, this rifle is virtually a visual twin of http://www.longrangehunting.com/forums/f53/my-260-mcr-59628/ (rear rifle is 260). This was done by design so that it's possible to seamlessly switch from one rifle to the other and have them feel the same. The only real change is a major change in horsepower. 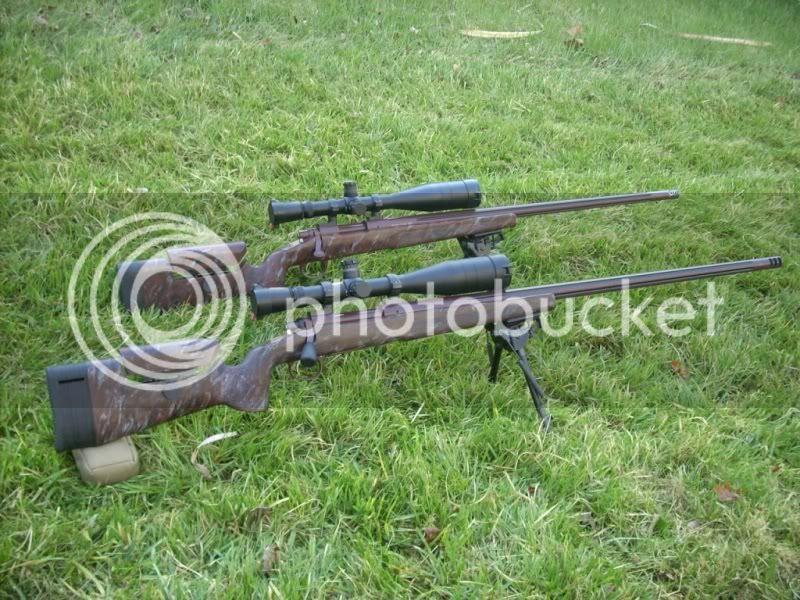 If you look closely at the stocks of these two rifles you will notice a subtle difference in the brown of the stocks. It is clear to me that McMillan custom mixes the brown and has some variation from batch to batch.
Last edited: Apr 2, 2011
C

Your three port brake does a nice job of taming this cannon!
J

Rarely does one see such a sweet pair!
D

Who doesnt love a pair of sexy twins!
Z

Can't wait to see it in person, looks like you are going to have some fun!

Beautiful set of rifles. I like your idea of both rifles feeling the same. Years ago I bought 3 Browning A-Bolts: .22; .223 & a .280 with the same idea. I planned to shoot the cheap ammo in the .22 to practice and be ready for deer season.

Load development is underway, so let the fun begin!

First off, this rifle is a dream to shoot. The muzzlebrake on it truly tames this cannon down. Will definitely be able to spot my own shots.

Would like to get the 208Amax to shoot in this rifle. So far, it's looking pretty good. This past weekend got out to fling a few down range...

These are encouraging results. Development will continue and will keep you posted!
C

Looks like you have a real shooter on your hands, it takes me 94gr of retumbo to get 3160fps out of my 26" barrel. Rem brass gave me 8 loading with high pressure loads before it started dumping primers. Not sure if you have ever used the 210gr SMK but it is another option for ya if you end up needing it, similar to the Amax and VLD's in the same weight but from i have seen less sensitive to jump distance.

Camshaft said:
Looks like you have a real shooter on your hands, it takes me 94gr of retumbo to get 3160fps out of my 26" barrel. Rem brass gave me 8 loading with high pressure loads before it started dumping primers. Not sure if you have ever used the 210gr SMK but it is another option for ya if you end up needing it, similar to the Amax and VLD's in the same weight but from i have seen less sensitive to jump distance.
Click to expand...

You're right, this rifle seems to be a shooter. The most impressive shooting it has done though was an experiment with H50BMG that did not produce any better velocities. At the end of the shooting session, I had one round each of four different charges (a two grain spread). My buddy shot all four rounds into a .336 group at 100!

Thanks for the tip on the SMK. In terms of the velocity, it is the 32" of barrel that's allowing for that. Surprisingly, this rifle shows pressure signs at ~91grains. This has been a minor source of disappointment to me in that everything I read (like your comment) is that the accuracy node is around 94. Can you imagine the velocities this rifle might produce at 94?

I have been shooting Nosler brass and recently acquired some Remington brass. Will be checking the differences in volume between them. Then load a few rounds and see what I get.
Last edited: May 4, 2011

Post us on the differences you come up with between those two brands of brass. My position is that Nosler's is much softer in the head than the Remmy's and Remmy's aren't that tough. But its all we have. Sure wish someone [as in Lapua] would make some 300 RUM cases. They sure would be sweet in a 270 AM.......
C

I imagine if that gun was anymore accurate at 94gr you would have to at least shoot one or 2 benchrest comps with it! I have some nosler brass that should be here anytime, i will also compare to my rem brass. Ya know maybe i just got a good batch but my last bag of rem brass has 8 firings on some of the cases and they are still holding primers!
C

Also are you neck sizing or fl sizing your brass? I started neck sizing mine and it raised the pressure so much that i had to drop my load down to the point the i was loosing accuracy, so i just went back to fl. Im assuming the problem was giving the brass less room to expand so pressure spicked when neck sized.
You must log in or register to reply here.
Share:
Reddit Pinterest Tumblr WhatsApp Email Link