Great to hear your replies and questions. I’m only too happy to answer them.

Yes, Feenix. A shame we didn’t bump into each other. I would have been only too happy to take you out on a stalk.

Flintlock
We have six wild deer species here;
Red, Roe, Fallow, Sika, Muntjac and Chinese Water deer.
Many feel the Muntjac is the tastiest of all!
They are only small but if you butcher them well there is quite a bit of meat and there are plenty local to me! I do tend to take the bucks only as they are larger and don’t have babies

this also
means I don’t take a milky doe laving a fawn to starve (some do though and it’s legal) They breed all year round and there is no closed season on them! They are considered a pest by some (but not me) they are rather endearing little animals and you regularly see them grazing on the roadside (I’ve hit two of the buggers who suddenly decided to run out into the road)
There is a trophy scheme on the bucks and people pay good money for a medal buck about £400/500

they must be mad!!
The other deer have varied seasons depending upon their sex and breeding seasons. We also have minimum caliber and muzzle energy laws for each species.

BCMAG2
We need to be licensed to own firearms and it’s tightly regulated and enforced but if you have good reason (stalking, vermin control, target shooting) and you don’t have a criminal record you can obtain firearms and believe it or not there are many who do. We aren’t allowed full auto but can have semi auto in .22 rimfire (for the time being) and in shotguns but that’s not so common and a bit harder to obtain.
The law can be confusing and at times flipping daft but in principle if you have “good reason” as mentioned and land suitable for the caliber you can obtain one! However generally only one in a caliber unless you can prove why you need a second one. I have two 30cals as I need one with a scope and one for woodland iron sight stalking. I could in principle apply for a third as a long range competition rifle. However if you loose your land or leave a target club you will loose your rifles! I could go on but I won’t!!

I hope that answers some questions.

Time for a beer. I’ve been out on the range all day (first time in ages we’ve been allowed since lockdown)

BigDon said:
A Muntjac typically weighs in under 50 lbs on the hoof. They are timid forest creatures that are nothing like a Wyoming speed goat. They don’t run either fast or far. Taste is mild - a lot like rabbit. They’re very territorial, so the hunt is bit more like shopping than hunting. They are usually in tight brushy woodsy environments, so a long shot would be 75 yds - again - more like rabbits than deer. 22 mag, 17 hrm, 22 lr more than adequate. Most I’ve shot were 25-30 yds.
Click to expand...

Britmeister said:
Yes pretty much how they are but we can’t shoot them with rimfire! For Muntjac and Chinese water deer only, a rifle with a minimum of not less than . 220" and muzzle energy of not less than 1,000 ft/lb and a bullet weight of not less than 50gr may be used.
Click to expand...

That sounds reasonable for an animal of that size. I would think that a .222-sized cartridge would be about right.

Britmeister said:
I took a friend out yesterday to look for a Muntjac for his Easter table.
Headed out to one of my permissions where I get quite a few of them and sat up high for a while scanning a small meadow where I has seen a doe on the way in.
Nothing showing so I decide we would take a stroll into the woods for a little stalk.
We got half way in and stopped to see if I could call one into us and sure enough the magic worked and I had a doe and a nice buck mooch into view.
They were both interested but the doe was more curious than the buck! I got her to come in to about 50 yards before she got suspicious and high tailed it, however a few strong peeps on the Buttalo and she stopped and turned back with him in tow, mistake!
He was getting interested now and eventually stood broadside about 50 yards away looking at us wondering what we were and presenting the perfect opportunity! Good shot, he dropped on the spot with the 100g .243 round doing its job.
The work begins this morning as they are a sod to skin!
Not sure I would have carried him out like that! He bled well and was covered in ticks!!
Happy Easter folks.
Click to expand...

Have a happy Easter. Don't believe I'd have slung a tick infest carcass over my shoulder either. Our dog got loose in St. Augustine, Fla. once, at the park, by the time we recovered it it was tick infested. We removed all of them before we put him in the car.
N

George Dean said:
Have a happy Easter. Don't believe I'd have slung a tick infest carcass over my shoulder either. Our dog got loose in St. Augustine, Fla. once, at the park, by the time we recovered it it was tick infested. We removed all of them before we put him in the car.
Click to expand...

Good idea, Sir. I'm in the process of getting over Lyme disease, and it has been a full-blown nightmare for well over a year. I'm about 90% recovered, but the other 10% is pretty elusive. Keep scouring your dog of ticks, and hopefully you will avoid the problem. If you do happen to get bitten by one, don't assume that you weren't exposed just because you don't get the bullseye rash - that only occurs about 20% of the time. The little devils are in stealth mode, and it's far better to get tested & treated while it's in the early stages than try to treat a chronic Lyme infection twenty years later like I'm doing.

Ticks or not, I stopped carrying any carcass deer size or smaller on my shoulder. With a bad back, I use a deer sled with a harness instead ... 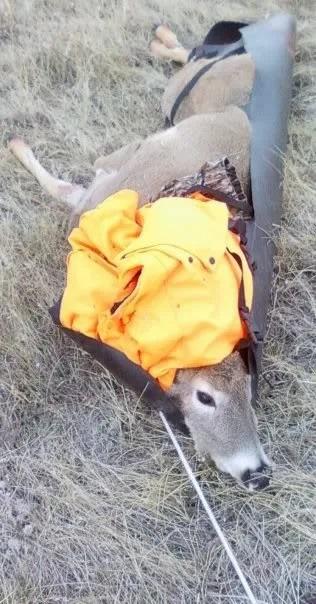 Years ago, I used to us the yellow plastic kiddie sleds to drag deer out of the woods, particularly when there was no snow on the ground. Visqueen construction plastic works about as well. A wrap around the muzzle with the rope keeps everything pointed in the right direction.
J

I’m just up the road in Mildenhall! Probably walked past each other back in the day!!
Click to expand...

I spent a lot of time flying RC-135's out of Milden Hall back in the late 70's and 80's. Used to be quartered at the Bird in Hand almost every trip.
B

jls in az said:
I spent a lot of time flying RC-135's out of Milden Hall back in the late 70's and 80's. Used to be quartered at the Bird in Hand almost every trip.
Click to expand...

Nice! I’ve collected more than a few hangovers from the Bird in Hand. It’s still there but closed like all our pubs due to COVID restrictions.
M

Britmeister,
Congratulations on a great trophy and happy Easter. Any special recipe's for cooking your Muntjac? Thanks for the story and pics. MT
P

Ticks/Lyme disease one can usually recover from. A round in the head not so certain. I would never carry a game animal over my shoulders or otherwise without wrapping it.....and me.....in some amount of blaze orange to signal to other hunters that "this ain't for shooting." Even on private land one never knows when another hunter.......trespasser, poacher, careless fool......may end up on your land and mistake you for their prey. Dead is for a long, long time.

That's a handy piece of kit. Every try to drag one with the hind legs? I need to move one several hundred yards by myself, didn't take me long to figure out I was going against the grain, so to speak. ;-) Much easier to drag it by the antlers.