I think army brass prefers CAS and indirect weapons in place of snipers quite often. We started using SDMs in every squad on my last deployment but they weren't used effectively. Basically just a more accurate rifleman. I agree 100% about sniper becoming its own MOS. That's the only way they will start to be looked at as usable battlefield element, not a second string.
Z

carnac said:
dfanonymous - Every Marine is in fact a Rifleman. EOD, COOK, ATTORNEY (YOU GET THE DRIFT). Pilots do get some passes. (unless on shore duty - not currently flying) Also new qual course involves 500yds. If available, night firing, 600yds and moving targets. Only branch currently shooting LD with M16's.
Click to expand...

Just because they qualified once doesn't make them a career rifleman. Weapon proficiency is lost without frequent training. All the non-combat mos marines I know, didn't shoot frequently enough to be considered "riflemen". Marine propaganda.
C

It is yearly but good idea Zach. How doe weekly sound ?
J

shootski said:
Snipers...not invented here or in Russia!
Google GIRARDONI or the incorrect spelling Girandoni. You will find an amazing repeating rifle (at least 10 shot) that worked far better picking off Non Coms and Officers at over 100 yards making no cloud of blueish-gray smoke that gives your position and likely obscures any follow-up shot!
Made in Tyrol, Austro-Hungarian Empire!
Everyone else was still using muzzle loaders! Unfortunately it was way ahead of the metallurgy needed...todays Big Bore Air Rifles are direct decendents.

Oh yes, I remember reading about those Pre-Charged Pneumatic (PCP) air rifles. However, as this article points out, they were not used as sniper rifles. It wasn't until the 18th century that the percussion rifle was used in a sniper fashion. These 1770s PCPs were only 800psi pressure, smooth bore and used ball ammo which isn't conducive to long range shooting. Today's PCPs use 3000psi pressure, rifled barrels, and conical bullets, that's a much different animal. 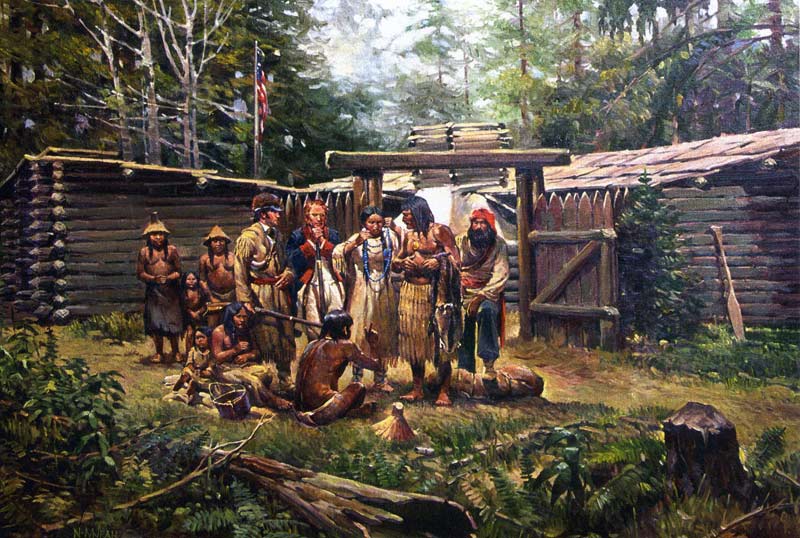 A history of the Girandoni Air Rifle and its use during the Lewis & Clark Expedition.

DWier said:
If your not familiar with sniper training and scout/recon you should look into it. No way is the army going to put everyone through that. Most would not make it. The ones who would make it are now snipers.
Click to expand...

Bravo 4 is the additional skill identifier the army has for a school trained/graduated sniper and sniper billets. I’ll let you put 2 & 2 together on that one.

Our media is no different here than over there. Owned by a few billionaires with an agenda to brainwash us all. Case in point, wearing a stupid mask everywhere due to a virus that is nowhere near as deadly as the common flu. Next thing you know, we'll all be lined up to get a "vaccine". All a bunch of BS anymore if you ask me. Sorry but I dont, nor will ever conform to this. Bunch of mindless sheep these days...

Bravo 4 said:
Bravo 4 is the additional skill identifier the army has for a school trained/graduated sniper and sniper billets. I’ll let you put 2 & 2 together on that one.

so are you going to look into it then?

300whisper said:
so are you going to look into it then?

I’m in the office now, looking at my training schedule and support requests for next class. Got guys on the range, doing cover & concealment and stalk lanes next week for a unit.

I’m in the office now, looking at my training schedule and support requests for next class. Got guys on the range, doing cover & concealment and stalk lanes next week for a unit.
Click to expand...

I’m at Stewart doing drivers training right now. Sweating my .... off. Reading this thread is the most tactical thing I’m doing all AT. Reserves for the win....
P

JustMe2 said:
Interesting article with lots of hyperlinks to other articles about each new long range rifle being used by the militaries of the world. Russia is saying they can hit consistently at 4600 yards. Yikes. Russia is also saying they are using a 3-line tactic of placing snipers at close, long and ELR ranges simultaneously to cover each other. I don't believe NATO does this, but it sure would have helped the "Lone Survivor" team if we had used this tactic.

Lots of reading, but I thought you guys would enjoy the multiple reads.

The US Military Is Losing the Sniper War Against Russia

The U.S. military has a problem: when it comes to long-range precision fires, infantry forces are outgunned by Russia.

JustMe2, thanks for the article and links, very interesting. Did not see any specifics of the Russian "4600yd consisent hit" cartridge. (Interesting Russian reference is in yards vs meters.) Now, that is amazing.,,,,treading on Magicland turf......in a non-self propelled ( versus rocket) projectile. One wonders how far can a Russian spit a watermelon seed???? Amazing how government decisions are typically outdated by the time they are made. The MK13 MOD7....deploying in 2018-2019.....round in 300WM being early 1960's technology is hamstrung in shooting today's long, heavy for caliber, high BC hybrid bullets due to its short head dimension........0.72 vs 1.12 300PRC.....and wide open throat 0.315 vs tight ~0.3088 PRC; and, the belted WM head spacing difficulty versus the PRC shoulder head spacing. . The MK13 MOD7 firing 300WM for 1200-1300yd effectiveness has already been obsoleted at standoff distance by the 300PRC (and others).....selected for 50% first round hit probability at 2000yds. Barrett MRAD MK22 Deployment Kit includes the 338Norma Mag and 300NM, plus 308W (as a special purpose close range and practice round), with Navy retaining option for 300PRC. The 300WM, 338LapuaMag are also available aas mere caliber conversion kits....user level field switchable.) The 300NM external ballistics just slightly edges out the PRC, but at significantly greater recoil, greater powder consumption, and shorter barrel life.....and reported high angle scenario inconsistent ignition issues due to powder forward shift in the huge, way overbore case capacity. Nice design feature of MRAD change barrel is when a new super duper cartridge is introduced (or, a barrel is shot out), the MRAD can be retrofitted at the user level with merely a caliber conversion kit....Fix-It-Sticks torque limiter tools already included in Deployment Kit. The MK13 et el non-change barrel weapons are typically out of service for eight months for a round trip back to CRANE for a re-barrel/caliber conversion.

US military is also moving toward two-shooter versus shooter-spotter sniper teams. Second shooter, still the senior member, serves as primary spotter for wind/dope data, but is already on target through own rifle scope ready to make first shot impact adjustment and send adjusted second round instantaneously. The MK22 bolt in 338NM is slated to replace semi-auto .50BMG M107 as anti-material system. With standoff distances on today's battlefield, the time of flight is great enough to permit bolt cycling and re-acquiring target for own trace/impact observation, meaning semi-auto is of nominal aimed precision firepower benefit...with huge fired-brass-in-the-air position telltale, and higher mechanical incidence rate. The MRAD cuts weapon weight over half (15lbs vs 32lbs), and increases rounds carried by almost 200%. In mobile operations, the M107 is often left in the armory due to weight. The updated M107A1 cut 5lbs, still 28lbs versus 15lbs MRAD, but has never been adapted en mass by military. Projectile development portrays almost equal terminal ballistics between 338NM and venerable 50BMG......think downsized Raofuss round.
Last edited: Jul 11, 2020
J

Snipers are over glamorized! This community is biased because we all love long range shooting. A ground commander has a set number of troops to accomplish the mission. Those troops have various skill sets to cover the gamut of possible scenarios. The sniper is like the micrometer in the tool box. It isn't used or needed as much as other tools but is extremely useful...when you need it. Ground warfare, especially MOUT doesnt often present a good place to utilize that long range capability. The troops are either moving too fast or those low rise houses dont afford a great view. A lot of the terrain we worked had a lot of houses that had walls surrounding them and no high points to over watch. The DMR and snipers covered the long range approach but once inside were excess weight. The DMR can serve dual roles, the dedicated sniper, not so much. When you set up a sniper he has to have an overwatch to cover his back side. This takes bodies you need on the ground kicking doors, evac of casualties or as replacement team members. The old days of scout snipers leaving the wire alone and going hunting are fastly fading and are really a job that special operations are more equipped to complete. If you have a very specific mission where multiple snipers are needed a commander can fairly easily call his fellow commanders and gather up a team. When large surges with battalion size pushes are going on in large built up areas (Think Fallujah or Ramadi) , a sniper platoon is readily available. We see movies where crap is portrayed. Air support is rare and usually too far off. You're lucky if you have any kind of air support on any kind of regular basis. Sniper teams sitting on a rock out crop calling in fire missions is the purview of spec ops. Everyday guys get one gunner and its usually enough and he rarely gets used. Just my personal experience. I have graduated the old M-21 course, 7th Special Forces mini course, a bunch of DOE classes and various other long range camps. I'm a fan, but the practical use of snipers is far removed from the "idea" of sniping.
S

zach_destroys said:
I think army brass prefers CAS and indirect weapons in place of snipers quite often. We started using SDMs in every squad on my last deployment but they weren't used effectively. Basically just a more accurate rifleman. I agree 100% about sniper becoming its own MOS. That's the only way they will start to be looked at as usable battlefield element, not a second string.
Click to expand...

Counter sniper is an AT-4.

You say over glamorized, I say under utilized. People do look at snipers mostly just as the source for long range rifle fire. But their secondary mission as eyes and ears is just as if not more important. I instill in training that the radio is their biggest weapon/asset. That CCA/CAS and indirect fire will inflict more damage than any rifle. Ignorance in utilization is the biggest problem. They are that unconventional force within a conventional force.
L

My nephew was a Marine sniper in 2005 and 2006 in Afganistan and Iraq the story's he told me didnt sound to glamour or what he had to do in sniper school.
You must log in or register to reply here.
Share:
Reddit Pinterest Tumblr WhatsApp Email Link