I was wondering how you guys measure how far your bullets are off the lands? Or what is the best easiest way?
Thanks

Are you asking about custom tubes or factory?

Here is what I use, pretty decent setup. Takes a little practice to get the feel. You'll have to buy the 300 RUM dummy case which is a new case drilled and tapped through the flash hole and will thread on to this tool.

I re-size a fired case and seat a bullet pretty long. Longer than the COL recommended by the manual. No primer. Then I gently place the round in the chamber and see where it stops. If the round is fully chambered then I unseat the bullet a little. Most of the time I can just use a bullet puller and tap it once or twice. I am looking for the round to be about 3/16" - 1/8" from being fully chambered. Once I get there I close the bolt on the round (When I first started using this method I would seat it real long and "force it" but I was running the risk of sticking the bullet in the chamber. It never happened but this way made more sense so that's what I do now.)

I extract the bullet and look at it with a lighted magnifier. I can always see the land marks on the ogive of the bullet. I use a dial caliper to do a rough measurement of how much more I need to seat the bullet to be on the lands and subtract about .010 from that. I use micrometer seating dies so it's a matter of dialing in the additional depth, minus about .001 because of occasional backlash errors. I seat the bullet. I coat the ogive area of the bullet with a black (large) sharpie, let it dry, and re-chamber the round. From this point I usually have .020 - .030 to go so I make a .010 seating adjustment, mark, re-chamber, and check. I'm looking for a slight mark from the lands on the black part of the bullet. Once I get that or nothing I stop. By this time I'm make .001 adjustments so if I don't have a mark I know that I am very close. The case / bullet combo is left in the Mic box for future use

Once I have a bullet loaded to the lands I use an RCBS MIC gauge to record the length on a sheet that I keep in my MIC box. I do this for every bullet that I load for that caliber however I will say that Sierra and Berger are pretty consistent with the length from bullet base to ogive. Not the same between manufacturer but between the bullet weights that I've checked. BTW- OAL is pretty much a worthless baseline measurement for this IMHO. The MIC gauge doesn't care where the tip of the bullet is and neither do I. I guess if it's all you've got then it's better than nothing.

Once I have a MIC reading for touching the lands it's a simple matter of subtracting how far off the lands that I want to be from the baseline reading.

I've got the lock and load tool and the mic gauge comes with a dummy bullet. I adopted the method that I use because I wasn't happy with the inconsistency I was getting with the lock and load not to mention the fact that it's an OAL device and the measurement we are looking for is the distance from the ogive of the bullet to the lands. The dummy bullet that comes with the MIC is even worse... it's not even a real world bullet.

Don't forget that as you fire ammo you are slowly changing the distance (increasing) so it's a good idea to check it from time to time.
Last edited: Jan 7, 2010

I was wanting to load up some 210 bergers I just bought and I read the sticky about getting them to shoot. Does anyone have any idea how far off the land it would be if I loaded up at magazine length? Its a factory 300rum? I don't have any of those measuring devices so I guess ill need to invest in some cause it seems like it a big deal with the bergers. Thanks for the help! 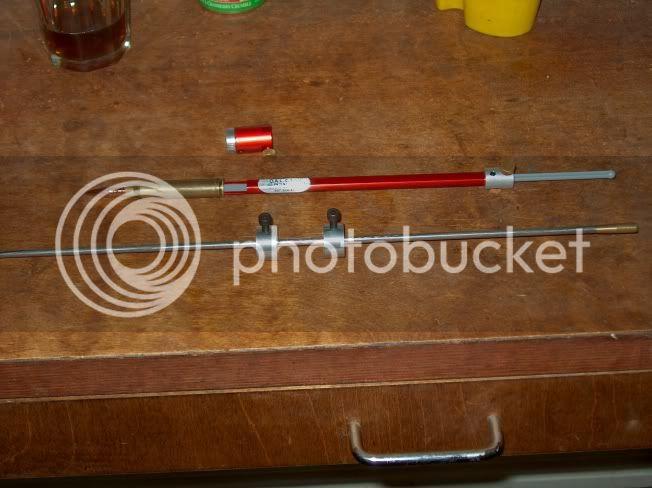 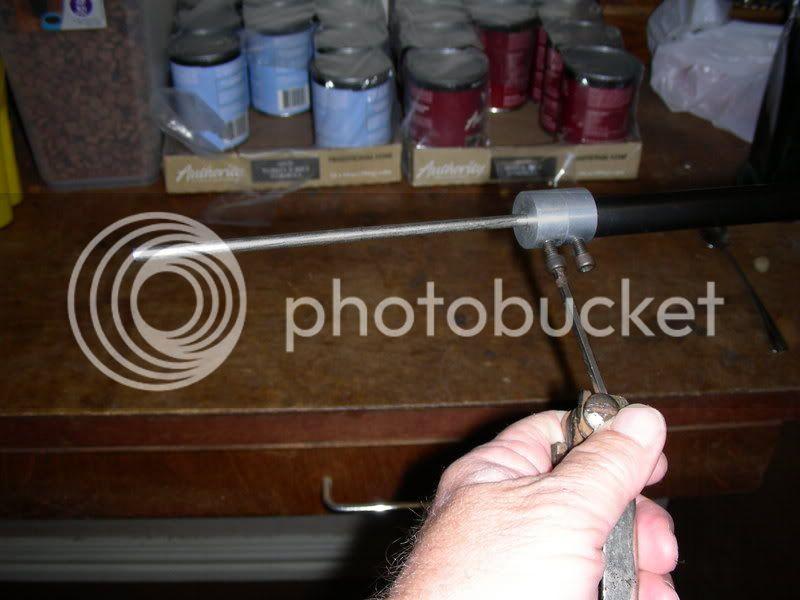 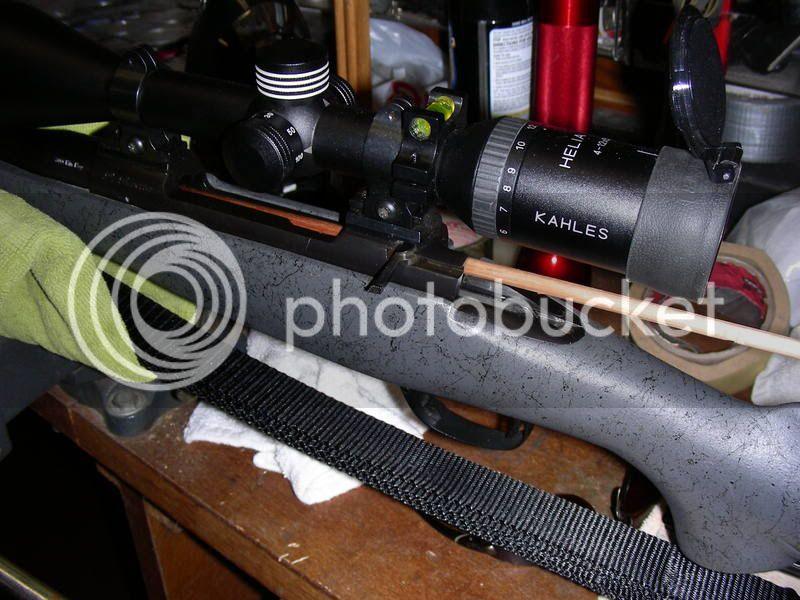 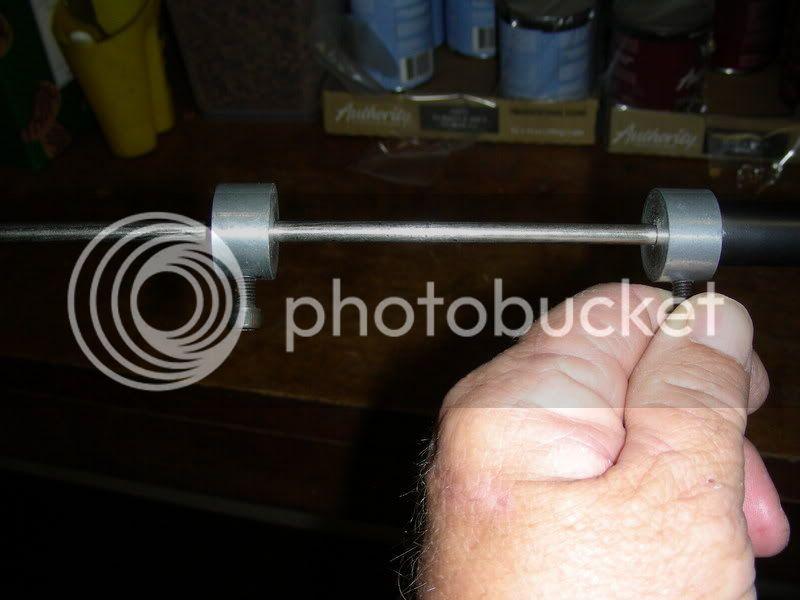 measure between the collets 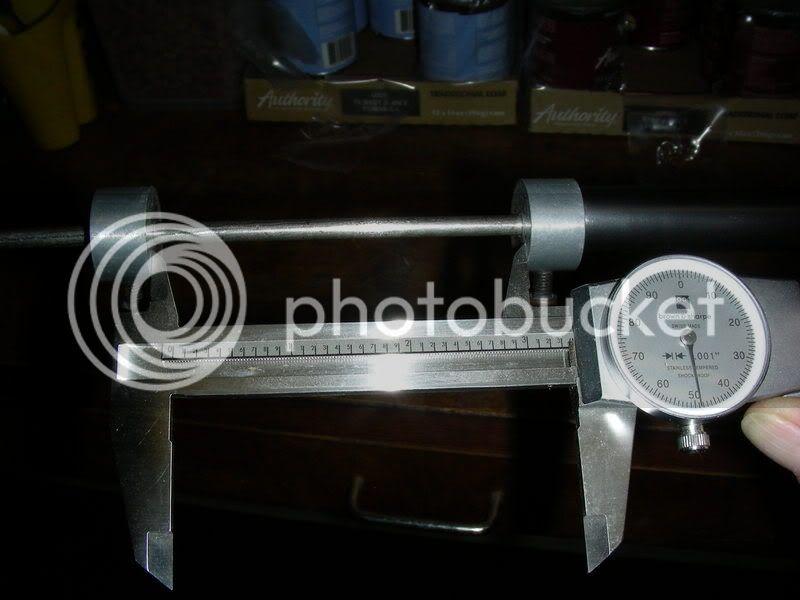 the only variable is how far you are pushing the bullet into the lands when inserting and holding it there.

Best $25.00 I ever spent on reloading equipment (price may have gone up since I have had it for 3 or 4 years)

Now this is OAL(to bullet tip), and after getting the measurement with the rod, I seat that same bullet until it matches the OAL measured(into lands). Then I put a Sinclair nut on it and log OGV JAM.
All adjustments from there are based on the OAL to OGV as measured using the nut/calipers.
G

Woods, I bought a set identical to that 30 yrs. ago at a gun show, no name on them. I use them all the time. The inner ring on mine is split and threaded to open it up a little for measured jump.

I don't use Sharpie ink on my bullets; after an dummy round is seated, I twist 0000 steel wool around the bullet, shine it up a bit and close bolt on it, withdraw, and look for the land marks transferring to the bullet. This can at times be difficult to spot in a factory barrel. Use a 6x jeweler's loop to examine for the marks.
S

Here is an easy cheap method I use and it works great. Take a sized piece of brass for what ever caliber you are reloading without the primer in it. Then take a hack saw or a dremmel tool with a cut off wheel and cut long way down the neck to the top of the shoulder. Then drill out the primmer pocket with a 1/4 inch drill bit. Now take what ever bullet you intend to use and insert it into the brass leaving it longer than you think it should be, you may have to squeeze the the neck to make it fit tight so it takes some force to push it into the neck. Now insert the round into your firearm and slowly close the action then slowly open the action. Now mic the overall length of the round and choose how far you want to load off the lands I go about .005 on most of mine and set up your dies to that lenght. Heres why you drill out the primmer pocket, now you can take a small screwdriver, nail or what ever and push the bullet back up so its long again and you are ready for the next time you use it. I have one made up for every caliber I reload for.

I am interested in learning more about this Col EZ Tool that Woods mentioned. I have always used the Stoney Point/Hornady and have had great success with it. I did see this tool or one similiar to it in the Sinclair catalog and they said it was the most accurate for the job. Is this true? What makes it better?

The "delrin action guide" they are talking about looks like this 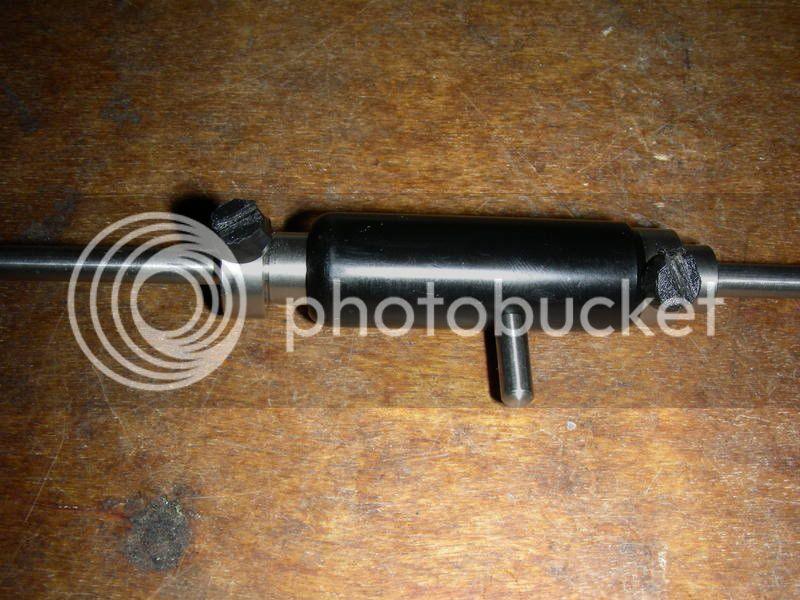 and fit very few of my rifles. The lock screws are a bitch to get to hold the rod in place (notice the crude attempt at home made slots for a screwdriver). It requires quite a bit of math and sits in the drawer now. The rod is short and will not fit down the muzzle to the bolt face, it goes in from the back of the action down to the back of the bullet. It is hell to get the rod to fit square on the back of the bullet while you are holding your gun muzzle down to keep the bullet against the lands. I can not recommend it.

Call Randy at the number I posted and he will return your call and send one to you before he receives payment. He's that kind of guy. I just had a poster on another forum call him and get one. You won't regret it, tell him woods sent you (I don't get anything but I have sold enough of them that I should!)
Share:
Reddit Pinterest Tumblr WhatsApp Email Share Link