At least the barrels are.

GLTaylor said:
221,
A couple of suggestions:
• suggest you use bronze core brushes rather than steel cored. Steel cores can damage your rifling.
• Also, didn't see one, but if you don't have one, get a bore guide to keep the rod and tip straight in the barrel.
• Recommend a bore specific pierce type jag to push patches. They do a far superior job to loops.
You can get non-brass jags so you don't get false positives on copper (blue patches)
Good luck on your journey in school and at the range!
Click to expand...

Bore Tech makes stainless steel jags and the point is SHARP. My error. It is not stainless, but some sort of proprietary alloy. The silver looking ones I have are the ones labelled proof positive. Still they are sharp.
Last edited: Jul 2, 2020
D

I have their no false read jags. I really like them.

The very best article I have ever used on Rifle Boer Cleaning was in the American Rifleman issue of November 2019 Pages 72-77. I have always thought I was very good at cleaning my rifle boer. My old 30-06 was cleaned after every shooting for the 56 years I have carried it to the woods. However I got to a point the groups kept getting bigger. After reading The Rifleman Article by Bryce M Towsley I tryed his method of cleaning. It took me four (that is 4) hours to get that bore clean. I actually followed the complete process twice. His cleaning method works. It brought my groups back to the 1963 level when I first started shooting the rifle.

archangel485 said:
What's the smallest caliber you can do with this?
Click to expand...

archangel485 said:
What's the smallest caliber you can do with this?
Click to expand...

Archangel. You got a link for what you bought off Amazon? Thanks!

PatriotHenry said:
Archangel. You got a link for what you bought off Amazon? Thanks!
Click to expand...

That was actually @VLD Pilot who said he bought one from Amazon, but I did just order one as well. Anyways, here are the links.

They do also have one with a wifi adapter.

keithcandler said:
Jon, Clean rifles do not shoot worse. I Have had Savages whose barrels looked like a Sewer pipe. These rifles would shoot like this:

I keep hearing about those barrels that shoot better after 20-40 rounds but no one in my immediate family has one, nor any of my shooting buddies and I have been shooting centerfires since 1967. I also shot a lot of benchrest comp and other disciplines.

Rule of thumb is, if you want the best accuracy out of your rifle, then keep it clean. You do not know it is clean unless you own a bore scope. My hunting partner and I shot 20K rounds a year shooting p dogs, ground squirrels, and chucks. We did not own a bore scope for a while. As soon as we did get a medical device that we used as a bore scope, we learned certain powders are harder on barrels. We also learned how carbon builds up in front of the throat. We were shooting at times 1100-1200 rounds of centerfire a day on p. dog towns. We learned how to keep the barrels performing for the five gallon bucked of ammo we were going to shoot up per barrel on that trip....223, 22/250, 243, and 243 AI.
Click to expand...

That's the way my 308 is. You gotta fill up all the drill marks to give the bullet a smooth path. 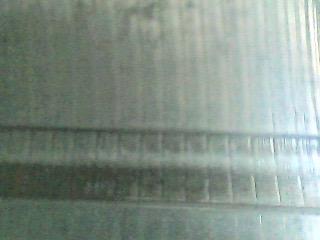 Well, this will get a few laughs but here goes anyway:

For carbon and general cleaning, I use Ed's Red. (Google it.) I have tested it against a good many products. Clean until white patch with product "X". Then run a patch wet with Ed's Red, and wait 5 minutes. The next patch comes out BLACK. It just plain works, and the ATF and lanolin in it are excellent protection against rust or corrosion.

It's cheap, and man does it work! I never let it sit in a bore for more than 5 minutes, and when the patches start coming out without blue, I run two or three water wet only patches, then a couple dry ones, then an oil patch or mop.

Just my way, but I'm happy with the results. I've gotten tons of "gunk" out of many supposedly clean barrels with this stuff.

Here's the interesting page where I got the above mentioned concoctions a long time ago:

Rough barrels are the exception to the rule as Vettepilot and Privi457 has stated. There are other issues with rough barrels, also as you can imagine. I just do not have the patience to screw around with rough barrels, it is like trying to "fix" an unfaithful girl friend....best to just move on.
N

Montana Extreme or WipeOut Brushless copper cleaner. Nothing better. Careful with the Montana extreme- ammonia will clear your sinuses. I go to my garage when I clean a barrel with it BUT it is awesome.
N

Privi457 said:
First thing buy a borescope from Amazon.
Of your 300 is as rough as my 308 (which soots submoa as made) you may want to fire lap it.
I've cured several copper foulers with the kit sold on Amazon. Contrary to instructions, start with finest grit, lap clean and shoot to see how much it still fouls. You can always take more metal out but you can't put it back.
Click to expand...

The fire-lapping is something guy either love or hate. A lot of guys are philosophically opposed to the idea of running anything abrasive through their rifle bore. I strongly suspect that most of the guys who hate it have either never tried it, or they didn't read the directions before they did it.

I have only one rifle that I have fire-lapped, and it shoots extremely well ( noticeably better than it did before lapping the bore ) and doesn't foul. The process is a major pain in the keester, but I would definitely do it again if I had a rough barrel. If I do, I will keep my use of the rougher grits to a minimum, as you have advised. The removal of metal is permanent, and I wouldn't want to get into the situation where I have "cut it off twice and it's still too short."

My main concern when I was lapping my bore was that it would lengthen the free-bore in the throat. If it did, it wasn't enough for me to measure. This kinda surprised me, but that is what I found. I didn't have a borescope at the time, so I don't know what the inside of the bore looked like before lapping. It felt a lot smoother when I pushed a tight patch through it, though, which says something. I have a borescope now, and after lapping the bore looks like a mirror.
You must log in or register to reply here.
Share:
Reddit Pinterest Tumblr WhatsApp Email Link