Hey folks, I think I am done with load development for this hunting season and need some help interpreting the target to pick my final load. I have already done pressure testing, seating depth testing, and final OCW testing. I am needing help picking the load from , I have two favorites and am wondering what the group would choose to hunt with.

The OCW test was 5 shots, I would have like to do 10 but, ya know, components are hard to come by. My thoughts are 43.1-43.3 are showing to be a consistent velocity node with the same POI, SD & ES are OK. 43.7 fills the case better, which I have read that this powder likes, and the SD, ES, and accuracy potential really show. What say you? I want to pick one, load it for the season, and hunt, no more fiddling around. 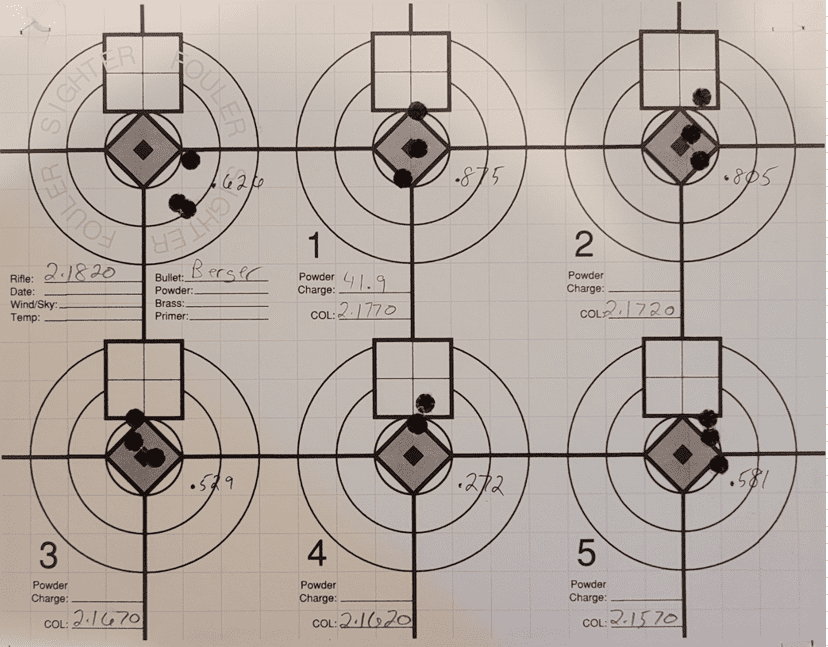 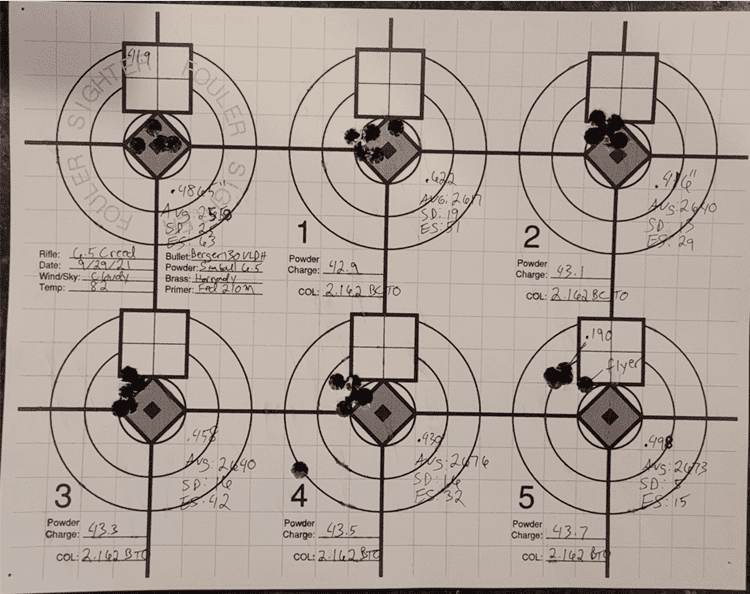 I would shoot 43.1, .2, and .3 at distance and see how they do with that ES and SD…by distance I mean your max range you would be willing to shoot an animal. If it works at that distance with vertical spread, I’d call it good and get ready for your hunt.

43.1-3 looks the most promising. Whenever you see a group string in a direction and can draw a line then it’s most likely a slight shooting error, like inconsistent rear bag pressure or NPOA.

Great looking groups though. I would just go 43.2, quit using up all the ammo in load development, and have more for hunting and distance tests. More times than not I shoot better groups at past 300yds than my 100yd.

42.9gr would be my pick. What distance do you intend to shoot?

What components are you using? How are you weighing your charges? I would expect to see lower ES and SDs from some of those loads. They’re all kind of inconsistent on velocity.
C

Jud96 said:
What components are you using? How are you weighing your charges? I would expect to see lower ES and SDs from some of those loads. They’re all kind of inconsistent on velocity.
Click to expand...

6.5 Creedmoor - Staball 6.5 powder, Hornady once fired case fire formed in this rifle, Fed 210M, Berger 130 VLD Hunting loaded with a Rockchucker and match master .288 FL bushing die w/ .003" shoulder bump and seated w/ the matchmaster seating die. I am throwing the powder from a Frankford Arsenal(great powder thrower by the way) about a half grain short and trickling up to within .05 gr of final weight.

You hit the nail on the head with my SD concerns. I would have loved to start this venture with H4350 but 6.5 Staball is all I could find. The research that I have done on this powder is it likes to be loaded near max which is why I am testing in the 43~ gr area instead of shooting 41.9.

My max safe pressure would be 44 grains but I really don't want to go there. I know its just one sample size but the research and the OCW target show to confirm that higher pressure = lower SD. I will also say that the 43.7 gr group had a different feel and tone from the rifle while I was shooting than the rest of the groups. I know that sounds crazy and its not something that I can measure but I would equate it to a hammer striking a nail perfectly in the center of the face of the hammer every time while the other loads were like the hammer striking a nail in different places of the hammer face. Again another crazy claim but I chalk it up to my years of competitive golf and my hands and ears are able to feel and hear the difference between the center of the club face and not, even down to missing by one groove. Feel is not something that is ever written about in the rifle shooting world but I think it may be playing a part my load development choice whether it be right or wrong.

Anyway I'll stop rambling. My max distance is going to be kept to 600 yds. My ballistic app shows me that this round is 970 ft lbs of energy at that distance so thats where I stop. With that, the farthest shot I have on game is less than 500 where I hunt so I should be even better with energy. At my max distance there is a 3" potential vertical error when I calculate one SD below AVG and one SD above average on the 41.1-3 gr 2640 FPS load. There is only a .5" potential vertical error with the 43.7 gr load.