Another recommendation of the Kifaru gun bearer. Once it's adjusted the rifle almost disappears on the pack but ready in an instant. I was sceptical but once I used it and went through the short learning curve I would not go any other way especially with a heavy or long rifle. The height can be adjusted. Mine is on a Kifaru Shape Charge/Sherman. Their stuff is pricey but it really does work.

What are called "barrel band" sling attachments with QD studs are available for several barrel diameters. I suggest you measure your barrel out where the sling would be comfortable and shop for one.
J

I strap heavy guns to my pack.

. No seriously, the rifle i used to kill the elk in my avatar has a barrel that's 30" long including the MB. I've always just carried the rifle in my hands after I quit hunting using horses & started backpack hunting. I've always hunted wilderness areas in CO, so usually fairly rugged country. Rifles have all weighed 12 lbs. or more.
P

Another vote for the Kifaru Gunbearer! Your gun is long but if you mout it to your pack it would be even taller than with the Gunbearer. I think they’re $34, it’s definitely worth a try. I have a 26” RUM with a 3” brake so getting close and no issues. For just a sling I picked up a slogan sling last year and I don’t think I’ll ever use anything else. Just my $0.02
C

Unertl Eyebrow said:
I re-barreled the STW with a 30"magnum contour Hart barrel. It's a bit top heavy to throw over the shoulder and head up the mountain. What methods are you using for carrying the big ones?
Thank you,
T
Click to expand...

If there is any chance you will get a shot before you plan to, suck it up and carry it. My Model 70 LR in 30-06 weighs in at slightly more than an M14 did when I was 19. It feels heaver now that i'm 72. I usually carry with the rifle horizontal on my shoulder and butt forward when I am moving and have a pack that hides a pouch that allows me to plant the buttstock in it and strap the fore end higher up while I'm dragging out to free my hands. I can switch shoulders as necessary or use the Ching Sling for a shoulder carry. My freezer is full of short range venison shot while long range hunting.
P

Unertl Eyebrow said:
I re-barreled the STW with a 30"magnum contour Hart barrel. It's a bit top heavy to throw over the shoulder and head up the mountain. What methods are you using for carrying the big ones?
Thank you,
T
Click to expand...

No one else will concur with this because everyone uses the traditional shoulder sling or a pack as suggested else where in this thread. They don't try it so they don't know what they are missing. However, I am a believer in the Boonie Packer Safari sling concept. Use it on all of my long guns including hunting lightweights, ARs, shotguns, Barrett MRADs and even Barrett .50BMG M107A1 at 28lbs plus ammo and scope......you asked about packing big ones. Typically carries rifle in the "patrol ready".....military is where I became a believer in this sling concept.......and Jesus!! Allows quick snap shots when presented.....really useful where your prey hunts you or shoots back....YMMV. Think bear or Charlie if your rifle is in a pack....only once. Boonie Packer Safari is two point design that mounts to the traditional sling studs.....I've changed for specific needs. Rides with scope up in shooting orientation , sling over opposite shoulder with weight borne by body...sling generally angled diagonally across chest/back.....no slipping off shoulder...unless your head falls off....no personal experience there yet. Rifle is usually in horizontal position. Will sneak even that 30" barrel (M107A1 is 29" plus 4" brake...barrel heavy) through low hanging branches and heavy brush. Barrel can be angled right/left/straight ahead; angled horizontal/up/down. ....for safe appropriate muzzle control. I use it everyday hunting with a pack. Can shorten sling to pull scope up under arm pit to protect scope and provide great no hands control of rifle. ...trekking poles on shale or fording or heavy brush or glassing. Allows one/two/no hands carry. Can even position rifle on back...barrel up or down. I even climb into tree stands with rifle on my back barrel angled down to side. (Don't flame me. It's safer control of rifle than pulling a rifle up a rope toward me.) Last purchased at Cabellas for around $20.....Oh, I see $30 on Amazon now. I prefer the XL which is about 6" longer due to heavy parka and/or pack....and a little old age enhancement. Newer black color design has rubber stripes on under side of sling web to prevent any slippage. However, I prefer older version with bare webbing.....never had slippage problems.....adjusts even more easily. I now see the camo options don't have the rubber. Would go there. For less than a box of shells, what do you have to lose??? There are a few tricks I've developed over the years. You will evolve your own. Give it a try. It's a one way door; don't think you'll go back. Visit www.booniepacker.com. Note: website doesn't show all the positions and orientations you will develop. Safe, good hunting.
Last edited: May 21, 2020
P

Philward wins the prize. Obviously a knowledgeable man there.

That Safari sling looks interesting. Here is the Kifaru gun bearer on the Shape Charge (no Sherman). That's a borrowed Christensen Mesa 6.5CM 22" bbl plus the brake so ish 24" but a LH rifle (I'm right handed) so it's backwards to keep from jamming the bolt handle in my side, still worked great. 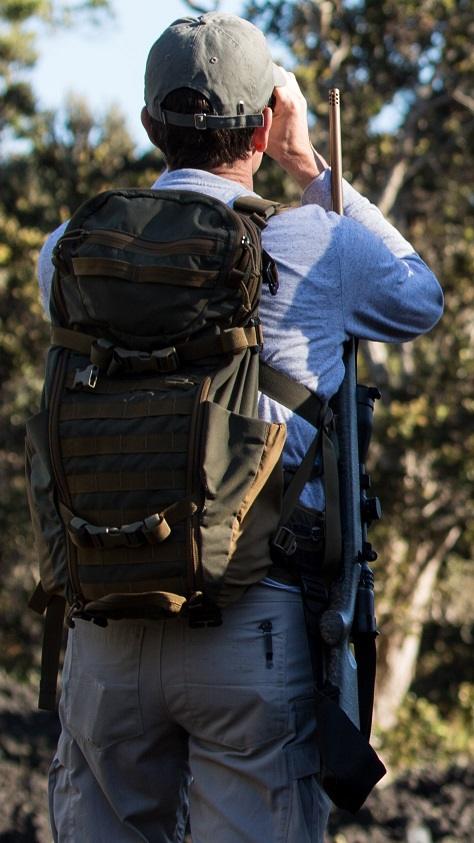 I really like the Safari Sling! Can you effectively preload with it without messing up the POI?

as for speed to deploy, the Vorn system is realllly speedy and in my experience, reliable. I am not coordinated or flexible enough to put the rifle back in without taking the pack off, though. I think it is probably as quick as any other hands-off solution. I've put my little 16" Model 7 in there, and it almost makes the rifle an afterthought until you need it. I don't think the pack is suitable for packing out an elk, though.

Backpack sling with a qd mount on the side
H