Lets see those family memories in the field.

Not to many times does a son “me” get to be on their dads first deer and second deer wver killed. My dad and i were able to put a stock on this buck and stood him up at 25 yards and put him down on the run with the new paramount pro .50 smoke stick. Later on we were both able to go out with our Second deer tags and put a couple does down together. My doe on the left was a 75 yard shot off hand and not less than a minute later my dad took a 190 yard shot off his knee each with my 6.5 CM. It was a very fun memorie filled season. I would love to see everyone elses! 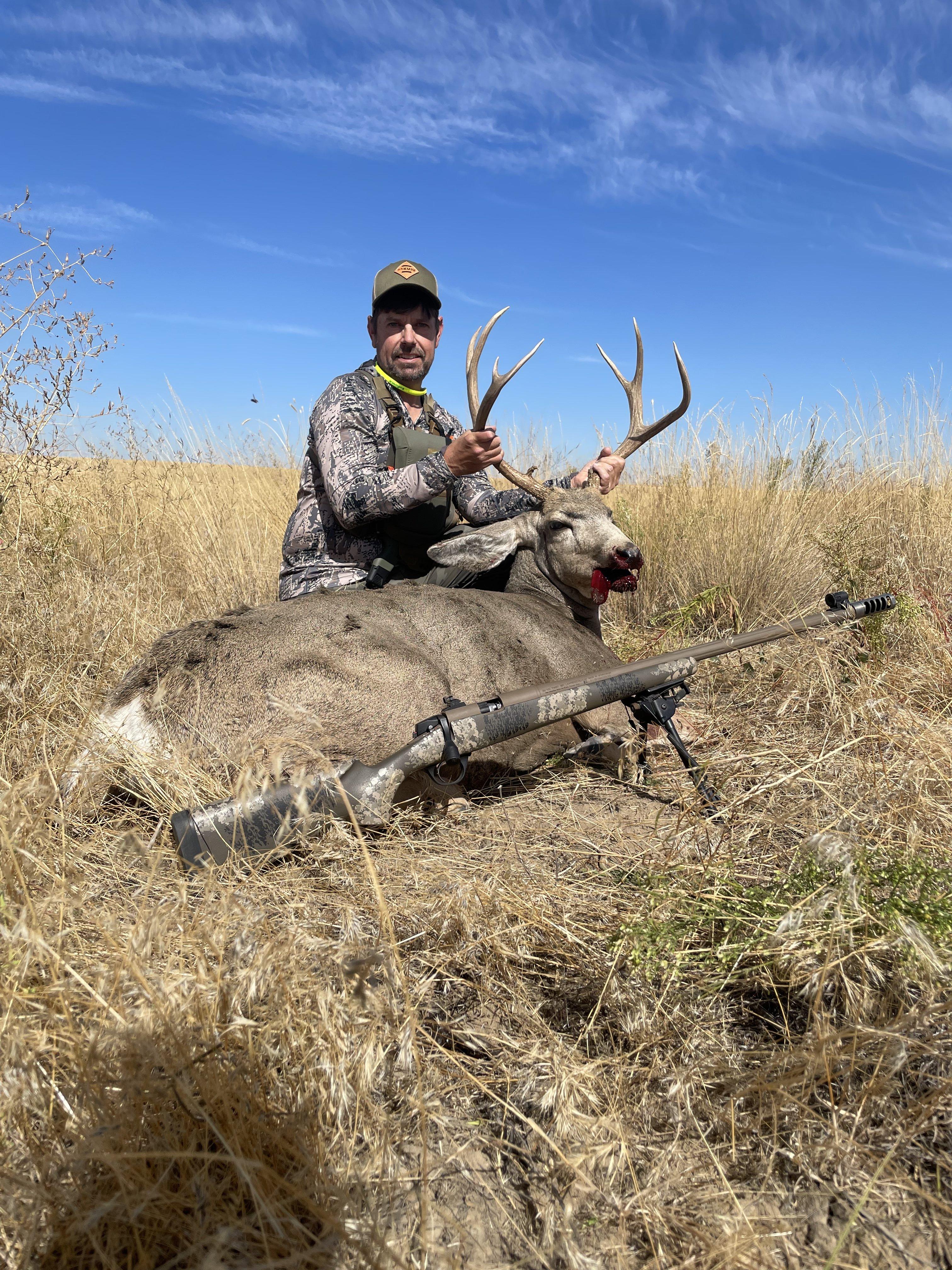 Iowa Late Muzzleloader season with the kids. Oldest daughter (19) is the shooter on this one. TC encore pistol in .357 Max. Chip shot 75 yards broadside. Perfect placement. 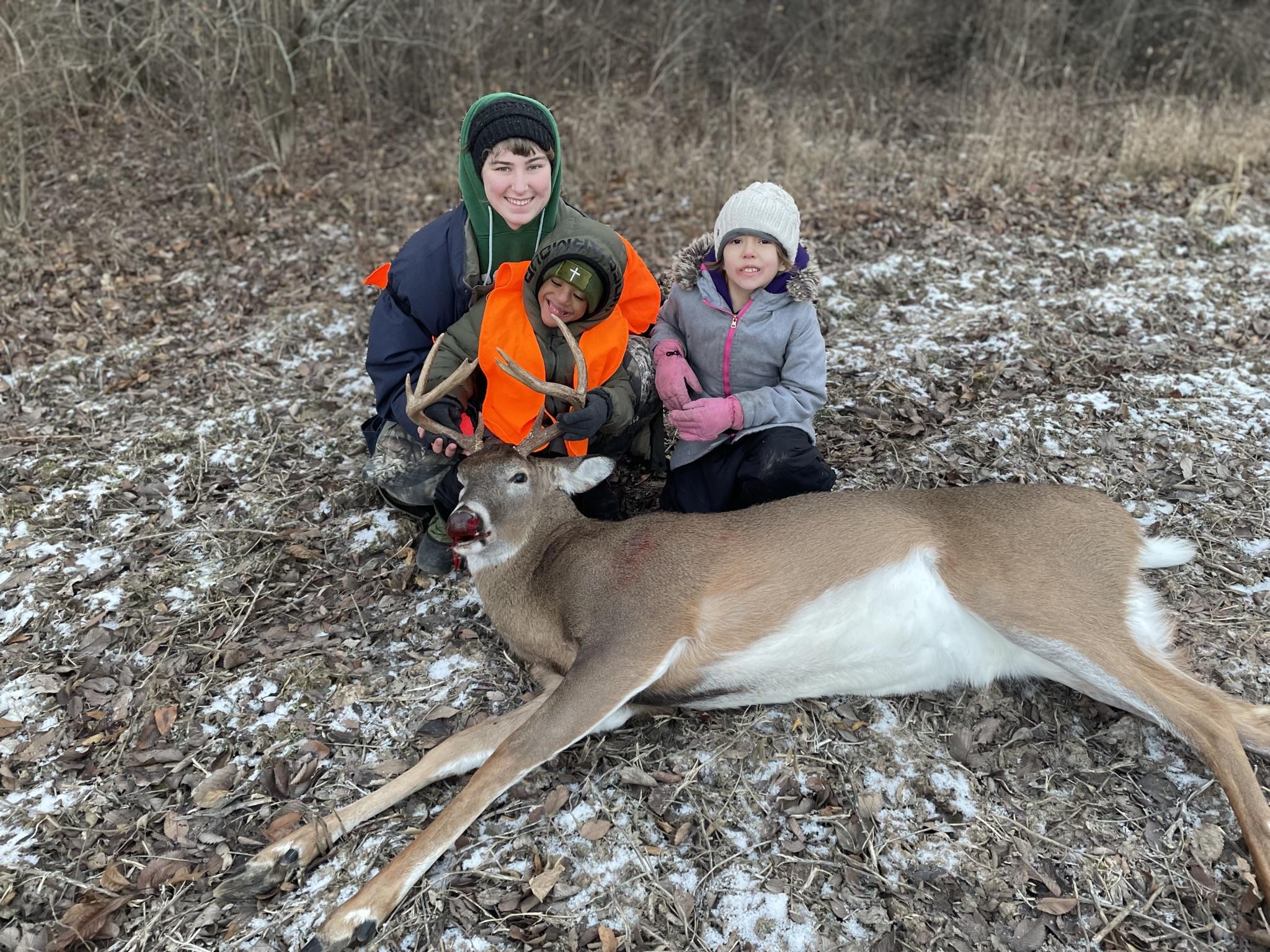 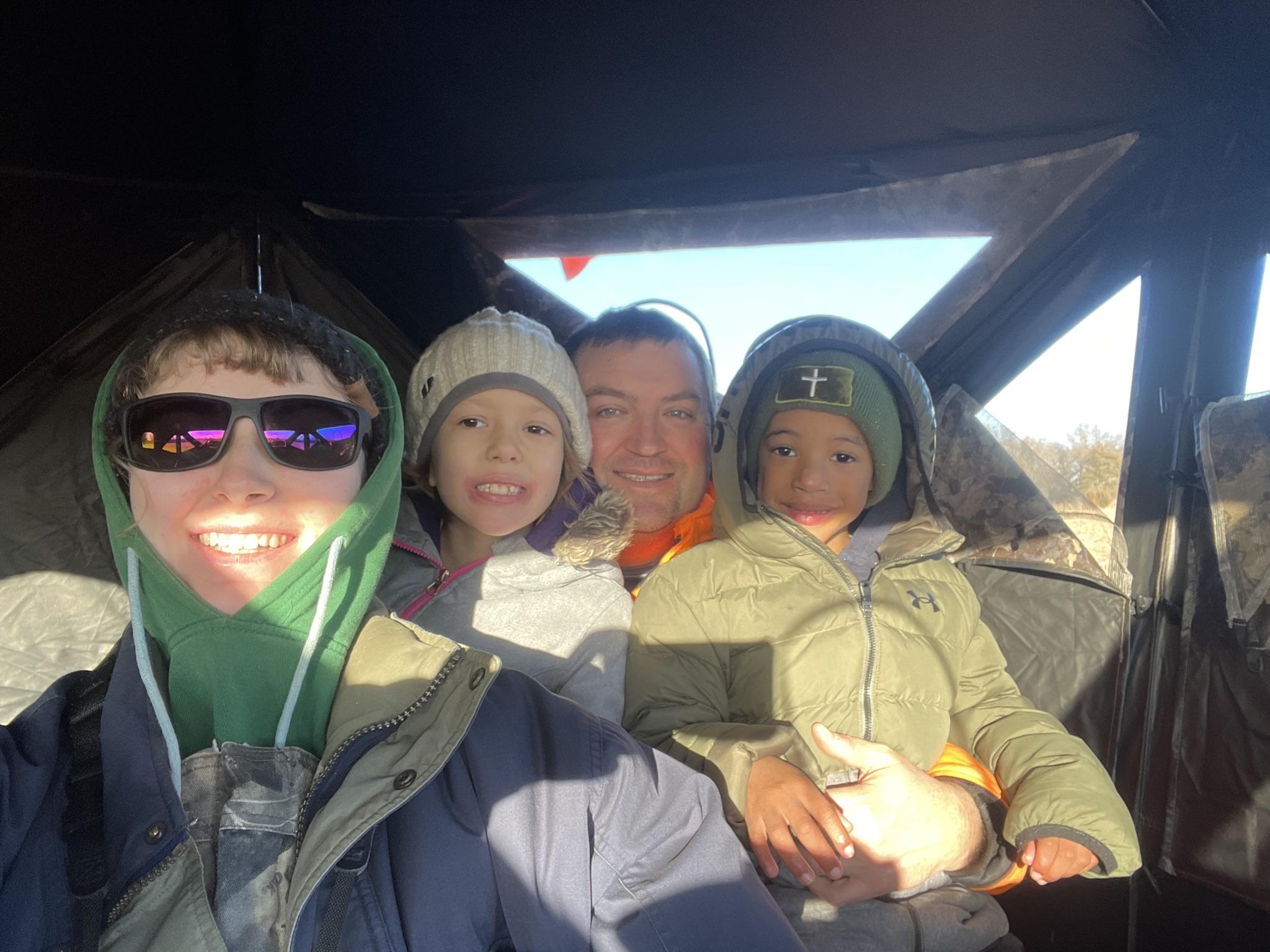 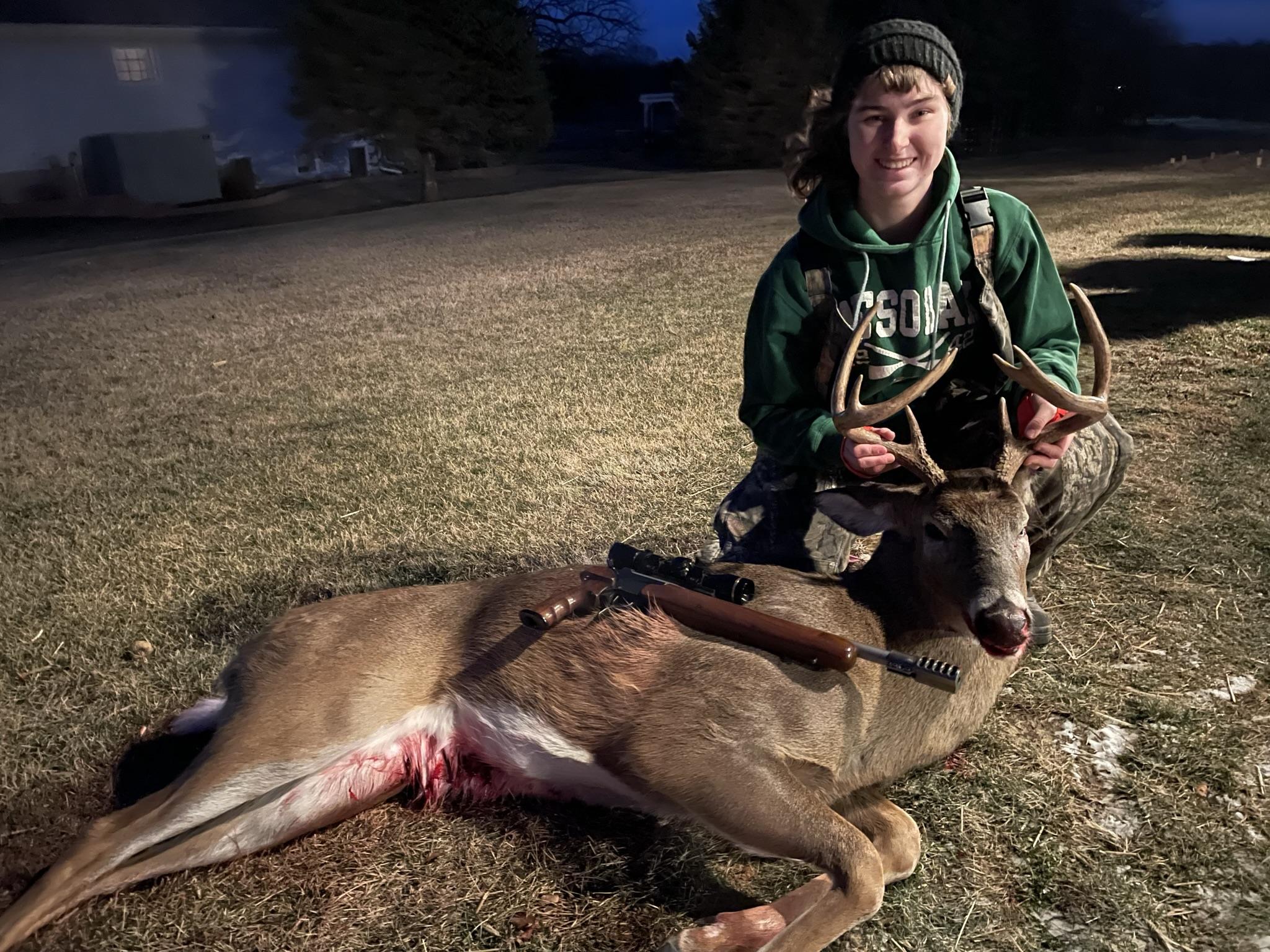 One of the four year old twins was with me the night before when I shot my doe. He was tickled to be the one to tell me which one to shoot and then to find her at the field edge. .350 Rem Mag in XP100 at 189 yards broadside. 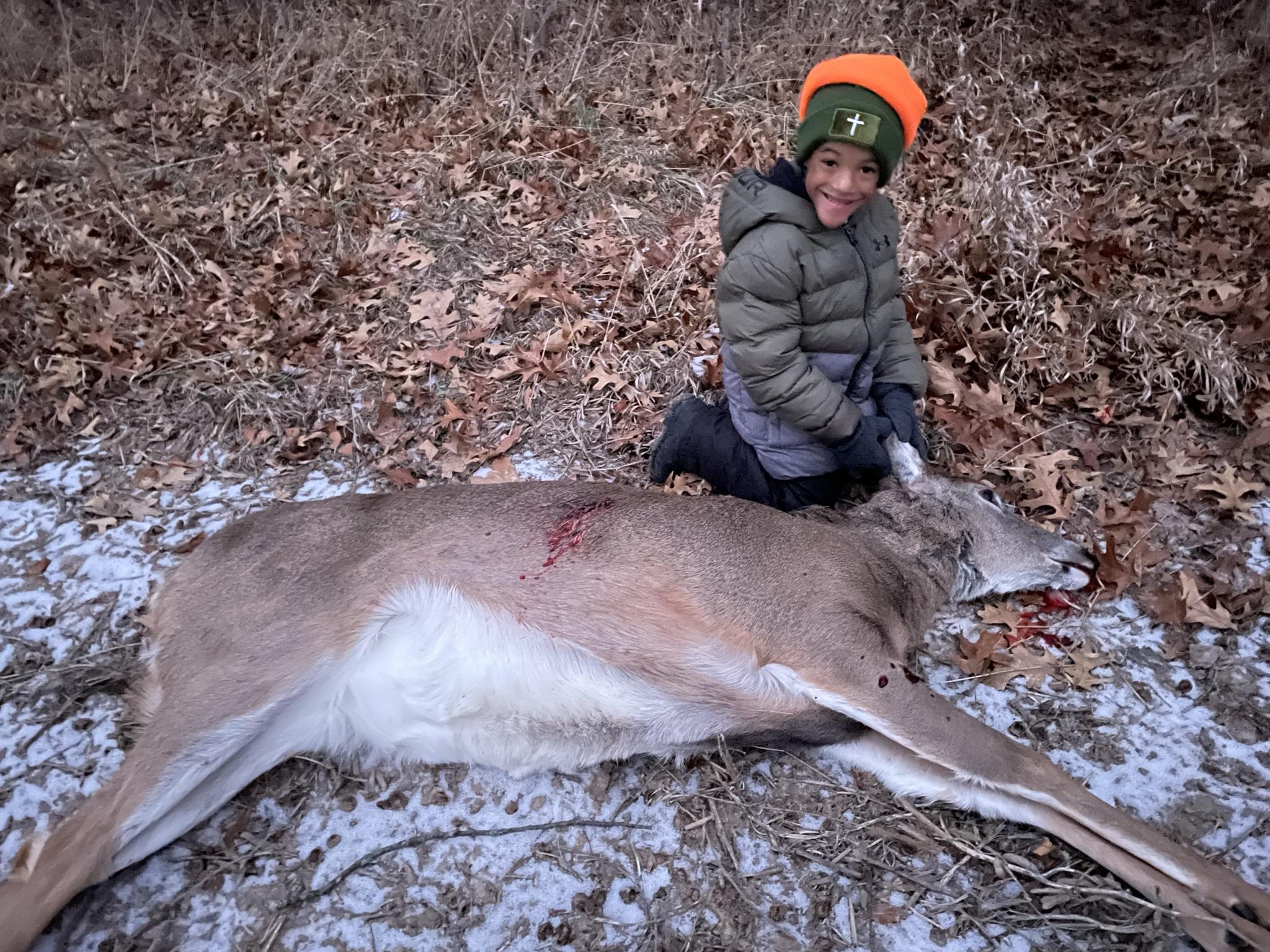 Nothing finer than time afield with my boys….

My daughter, and she was doing the "vegetarian thing" at the time... 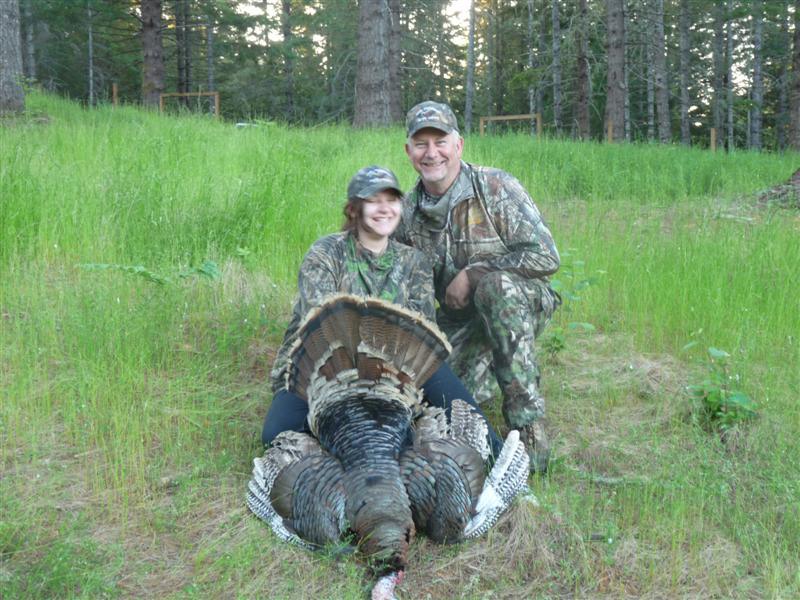 Having gotten Tyler on his dream deer back in November I started looking for a hunt for myself knowing it probably wouldn't happen being so late , I spoke with many outfitters and guides to no avail , finally I called a friend Charles who Tyler and I hunted with last season for management deer to see if he had any openings and to my luck he told me he had two trophies that he didn't try to sell because they were ghost , one of them never been seen in person and the other only seen twice in 6 years but he would catch photos of them from time to time over the years . We made a deal that next time one or both showed on cam he would call me , well the both showed up on cam at a feeder two weeks ago so I went down last weekend and hunted but neither one showed up for me , this week one showed up three mornings in a row at a feeder just at daylight but only stayed a minute or two so a plan was made for me to walk in around 5am and wait until daylight . So he dropped me off about 1000 yards away instead of feeding the roads and I walked in and waited, around 6:30 ish I could just see using the binoculars and so a started scanning the road and brush lines , at 6:50 ( still pretty dark) I'm scanning the brush line along the road out as far as I can see and working closer to my location and then at 31 yards I see what I'm sure is him by is frame just standing inside the brush line! Still to dark to be sure but my heart is racing nevertheless, at 7:00 the feeder goes off and he slowly heads towards it in the brush , a smaller buck is at the feeder when he gets there and he jumps in the pen , I'm still trying to be 100% sure it's the right buck by identifying the splits on both G3's , it's overcast and just barely light enough to be sure , I'm finally sure it's him but he has had enough and starts to leave the opposite direction, it's now 7:10 and he is walking directly away from me and I'm praying he will turn before hitting the brush! I'm shooting a old 30/40 krag my late father brought back from the war with him and made into a hunting rifle hand building the stock and everything back in the early 60's about when I was born , he has been gone about 30 years now and I'd never killed an animal with this gun but had shot a lot and hand loaded for , this was dads go to gun and he was proud of it for sure , my problem is the 3040 Krag has a trajectory about like a rainbow lol and the deer is now out to 140 yards! My prayers were answered when he reached the brush line and turned left and paused for just a second , the old krag barked and I lost sight of the deer but felt good about the shot , I text Charles and let him know and he was on his way to me , while waiting my mind starts racing and second guessing myself, was I on him ? Did I yank the shot? Was he to far for the krag? Seemed like forever for Charles to get there but when he did we headed to where I had marked as the spot , I was looking for the dig marks from when he took off or hair or blood or anything indicating I made a good shot. Not seeing any of that I looked the direction I thought he ran and just inside the brush line I see antler sticking up above the Grass ! Just an incredible feeling of relief and joy and remorse that dad wasn't here with me , I started my hunting passion in 1968 and I took until 2023 to break that 150" mark and equally if not more special was to be able to do it with the rifle my father built !

This year I helped my little brother get his first big game animal ever. We grew up in a hunting community but our father doesn’t hunt and we had no mentors.
Later in life I forced my way into hunting. I made many mistakes and honestly I am not a great hunter. I am hoping to help my brother get off to a better start than I had hunting.
On this hunt we got stuck in his truck and had to be pulled out, then his truck had a few faults pop up on his computer. Right as it seemed the day wasn’t going so well we spotted 4 cow elk. We got out and worked our way in fairly close and got him a great shot. He knocked her down with my wife’s 280 AI. It was a great experience, thanking god with my bother for this beautiful animal, after the kill was really special.
Hoping him and I will have many more hunting experiences as we do our best to learn and hunt together.

Hoping to do more with the family but here are some. My oldest boy has had two mule deer hunts, this year he shot his first buck. Father-in-law and brother-in-law on my elk hunt along with my son. My daughter came with me a couple days on my archery mule deer hunt and my son and I chukar hunt and have had my daughter along a few times. Last weekend my brother-in-law and I brought our girls along for a chukar hunt but they acted like little girls giggling and playing about.

Here’s a few I have over the past few years

Oldest Daughter two seasons ago with her first caribou.
My youngest boy spending time out on the trap line this winter and some late summer pike fishing
My middle daughter and the boy out picking some fresh blueberry’s (eating more than they picked)
My wife when she shot her first caribou (1st animal she ever harvested)

Granddaughter's taking turns in the stand.

Just a few of my boys pics from our adventures together. He is growing up so fast and I am going to be very sad when he leaves the nest.
Share:
Reddit Pinterest Tumblr WhatsApp Email Share Link